Exhibition Review: Dark Moon Rising and For the Sake of Love

These two exhibitions now on at Contemporary Art From the Margins cuts through stereotypes.
Pamela See 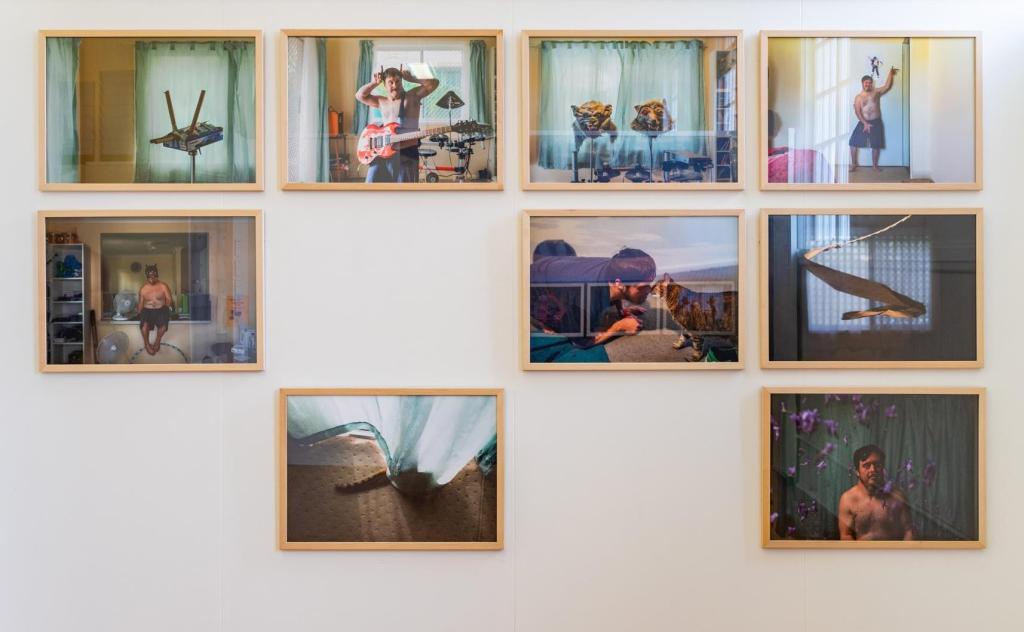 Art aficionados seeking an edge often look to the peripheries of a municipality. In Beijing, they congregated at the Songzhuang Art Colony. Located an hour’s drive from the Forbidden City, the district is renowned for its art museum, private galleries and artist-run initiatives. In New York, Brooklyn provides creative hub for the emerging and experimental. In Brisbane, the Fortitude Valley’s Art From the Margins Gallery and Studios has presented two cutting edge contemporary art exhibitions for the BrisAsia Festival 2021.

Dark Moon Rising and For the Sake of Love challenges public perceptions about three marginalised demographics living in South-East Queensland: people living with disabilities, single mothers and Asian women. The exhibitions coincide with Chinese New Year, which is also referred to as Lunar New Year due to its alignment with astrological movements as opposed to the Gregorian calendar.

The first exhibition is Dark Moon Rising, which resulted from a longstanding collaboration between photographer Louis Lim, and former Access Arts client Matthew Lys. The pair met as part of the program Camera Wanderers, of which Lim was a facilitator. Commencing in 2010, the organisation invited participants from a background of disability and disadvantage to explore their capabilities with cameras.

Meeting regularly and resulting in group exhibitions the initiative sits comfortably within the perimeters of the participatory action research method of photovoice. It is often employed within the social services sector as a reflexive device. The photography provides opportunity for the participants to examine and reconstruct their own narratives. The exhibitions provide opportunity to reify them through community engagement.

As an extension to the program, Lim and Lys continued to meet once a week between 2012 and 2015. The resulting body of artwork provides an intriguing insight into Lys’ imagination. To the casual observer, Lys shares an unassuming, yet contented, coexistence with his mother and furry companion: a cat he named ‘Gorgeous’. Masks, both theatrical and medical, are a recurrent feature. They provide a metaphor for a fluidity between the internal and external realities of Lys. His Down’s syndrome is but one small part of his complex personhood. The exhibition is a combination of domestic phenomena documented by Lys, and theatrical performance he has constructed documented by Lim.

It is presented as a combination of photographs, film and installation. The latter two media make notable use of the Kuleshov effect, which montages together footage to create new meaning. From its emergence during the early twentieth century, this juxtaposing was primarily employed to solicit an emotional response from viewers.

Tammy Law used cutting, of a craft variety, extensively in her autoethnographic exhibition: For the Sake of Love. Her narratives, which played out across two timeframes, were constructed using a conflation of traditional Chinese imagery, family photographs from the 1970s and her own contemporary photographs.

A digital print on fabric, featuring the Chinese symbol for marriage, greets visitors to the space. It has been carefully shredded into what she describes as a ‘curtain’, in reference to the bamboo beaded versions that adorned the doorways of her family restaurant on the Sunshine Coast. This is the story of how Law came into being, with the marriage of her parents providing the passage.

In isolation, the Double Happiness curtain might have reflected the ancient Chinese tradition of women being carried to a wedding in a sedan chair. However, the adjacent wedding photograph embellished with text over the face of the groom, titled Happily Divorced, would indicate that it is about breaking with tradition. Law has applied a similar treatment to fabric prints of her family home.

Although Chinese settlement dates back to 1803 in Australia, Law’s father was amongst the first generation to arrive after the Whitlam Government abolished the federal government laws collectively termed The White Australia Policy in 1973. According to Law, her father became ‘the man of the house’ at aged nine. In 1975, this self-reliant and ambitious young man arrived in Caloundra. He purchased a restaurant prior to ‘going to Hong Kong to hunt for [a] wife.’ Unfortunately, happy matrimony would not ensue with Law’s mother instigating a divorce during the 1990s.

This body of artwork also coincides with Law, herself, becoming a mother. Her process involves cutting and editing. This includes the adding of text as post-it like notes. We are invited to accompany her in these investigations into her intimate family history. The conservatism faced by her mother, as a single parent in regional Queensland during the 1990s, was amplified by her cultural background. It is not uncommon for Chinese diaspora to hold on to beliefs like the Three Obediences, which date back to the Zhou Dynasty (771 – 256 BCE).  Accordingly, daughters are expected to obey their fathers, wives their husbands and mothers their sons. Maintaining face or 好面子 remains fundamental to participating in these communities, both in a business and a social capacity. Law cuts through the veneer of domestic bliss, and with it stereotypes associated with Asian families.

Unlike Law who was born in Queensland, Lim arrived with his family as a child in 2002. Both artists attended the prestigious Queensland College of Art at Griffith University. Tracey Moffatt is amongst its esteemed alumni. Their practices also exist in a cannon of critically acclaimed Chinese Australian artists who embrace photo media. William Yang, whose survey at the Queensland Art Gallery is forthcoming, is celebrated for his intimate portrayals of his family in Innisfail and loved ones in the Lesbian Gay Queer Bi-sexual and Transgender (LGQBT) community. He is also known to transcribe the surfaces of his portraits with his own handwriting. Likewise, the exhibitions reflect the theatrics and candour of multi-disciplinary artist Greg Leong. Both are pioneers, to which this presently burgeoning generation of Chinese Australians is indebted.

‘Law cuts through the veneer of domestic bliss, and with it stereotypes associated with Asian families.’

Lunar New Year is the most significant of calendar observances for the Chinese community. Primarily focused on family, not unlike Christmas the celebration tends to either enhance unity or foster discord. It provides the perfect platform for For the Sake of Love, which examines the public perceptions of the Chinese family unit. The lunar emphasis also adds poignance to Dark Moon Rising. Although the scientific evidence is contentious, mythology would have us believe that the full moon can influence the behaviour of fauna including Homo sapiens. This notion compliments the theatrical roles Lys inhabits and Lim documented. These manifestations of Lys complex personality were presented like different phases of the moon, the crescendo of which was the werewolf that inspired the title of their exhibition.

Pamela See (Xue Mei-Ling) has a Doctor of Philosophy (PhD) from Griffith University and a Master of Business, majoring in public relations, from the Queensland University of Technology (QUT). She has contributed to publications such as M/C Journal, Art Education Australia and Garland Magazine. Her research interests include craft, post-digitalism and participatory art.