Over 200 portraits of love in its all myriad forms.
Julia Faragher 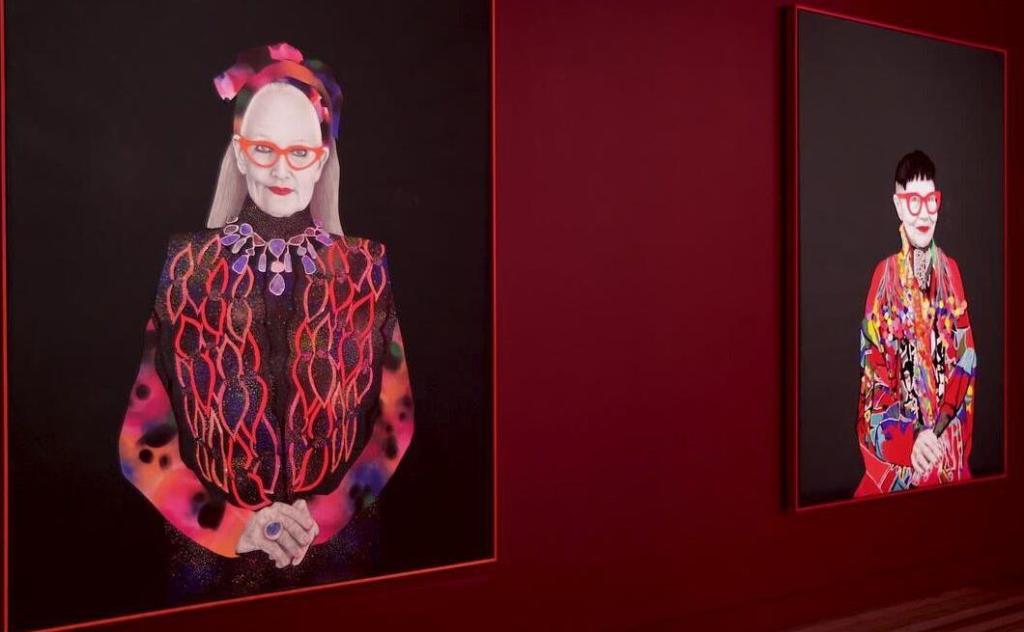 Australian Love Stories is an exciting and well-curated new exhibition at Canberra’s National Portrait Gallery. The exhibition is a beautiful collection of portraits showcasing many different forms of love including family, friendship and romantic. The portraits vary in medium including paintings, photographs and films. There are some familiar faces in the exhibition, but the stories are more interesting than the famous names. Australian Love Stories feels like a love letter to the portrait itself and reminds us of the power of a single image.

One of the first paintings you see in the exhibition is You are what is most beautiful about me: a self portrait with Kel and Arella by Archibald Prize winner Del Kathryn Barton. The painting, which shows the three figures against a moss green background entangled with Australian flowers and a four-leaf clover, was borne out of Barton’s fierce love for her family and features herself and her two children. Having not considered herself to be particularly maternal, Barton was surprised and delighted to learn how much she loved her first son when he was born.

Jenny & Jack is a pair of paintings by artist Jenny Sages of herself and her late husband Jack. My Jack, a portrait of her husband sitting in a golden glow by the window, was painted while he was still alive. It sits next to Jenny’s self-portrait, After Jack, painted a year later after her husband passed away. Her grief is immediately obvious as the portrait is cold and grey in stark contrast to the brightness of her husband. The two paintings are worth seeing up close due to Sages’ technique of scraping wax and thus creating lots of detail.

Australian Love Stories feels like a love letter to the portrait itself and reminds us of the power of a single image.

Another romantic highlight in the collection is Adrian Cook’s beautiful photograph of restaurateur Kylie Kwong and artist Nell. Kylie & Nell shows the couple standing in the back room of a friend’s florist shop in Potts Point where they got married in 2019. It is a rich and luscious garden that still maintains the comfort and familiarity of one’s own backyard. Kylie and Nell stand in the middle of the photograph, surrounded by flowers, their happiness made obvious by the brilliant smiles on their faces.

Judith Wright with Barbara Blackman is a painting by Charles Blackman of the poets Barbara Blackman and Judith Wright. Wright and Blackman’s intimate friendship is obvious from the moment you see the painting, from the way they look at each other and the sea of blue that surrounds them, more intense in the immediate space between them. When they met in the 1940s, Blackman was beginning to lose her sight while Wright had already been experiencing hearing loss for a number of years. They would write letters to each other over a 50-year friendship and met for the last time at the National Portrait Gallery in March 2000.

Carla Fletcher’s Jenny & Linda consists of two vibrant portraits of Linda Jackson and Jenny Kee, two friends and former creative partners. While the two portraits sit separately in their own frames, the paintings are clearly linked by style and colour. They each feature a greyscale figure wearing neon pink-toned clothes in bright patterns against a black background. The focus on clothes is a nod to the pair’s celebrated work in fashion and design.

Australian Love Stories contains over 200 artworks and over 80 stories. Through a wealth of different perspectives, a universal theme emerges: that love is something shared.