A first rate production of a classic work.
Suzannah Conway
[This is archived content and may not display in the originally intended format.] 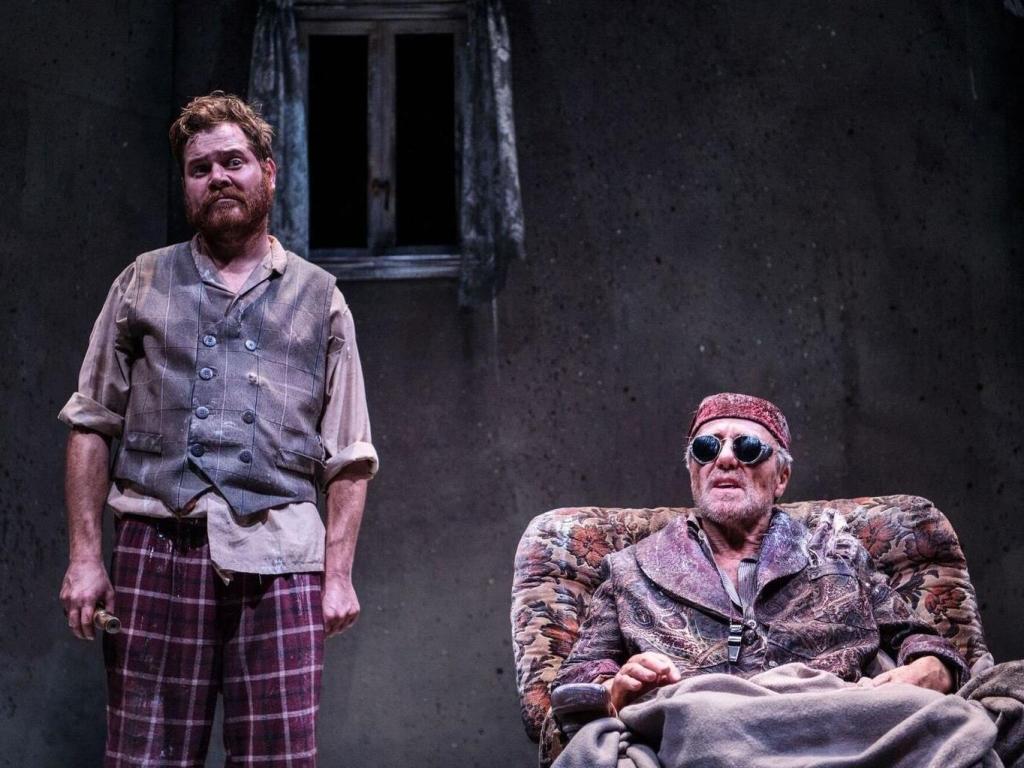 Samuel Beckett’s Endgame is a marvellous example of the Theatre of the Absurd with its highly charged poetic language giving expression to both the tragedy and comedy of human life and death. It offers characters struggling to find meaning in a world without hope or a future. Beckett’s genius is in the way he brings these elements together and yet leaves the narrative deliberately open-ended. We can make of it what we wish.

The four related characters are sheltering in an underground room and all have physical problems. The central and tyrannical character of Hamm is unable to stand and is blind. His son, Clov, is unable to sit and has one leg that is useless. Hamm’s father, Nagg, and his mother, Nell, have no legs and they live next to each other in dustbins.

Clov, the only one who can walk, spends much of the play being summoned by his brute of a father, moving back and forth to the imagined kitchen where he stares at the wall or looks out of the windows for any signs of life and seeing nothing. Clov’s continual setting up of ladders and climbing up and down to the windows – with his one bad leg making this a chore of epic proportions – is comic but futile. Leon Cain gave a moving and utterly convincing performance as Clov, a man who appears unable to confront his cycle of hopelessness.

As Hamm Robert Coleby’s performance was masterly and he was totally in control of the stage. His nasty, domineering and ultimately pathetic, blind old man has some of the best lines in the play; wonderfully rich and poetic, which Coleby delivered in a well-modulated, lilting Irish accent. The juxtaposition of the brutish character and lyrical poetic lines portrayed a complexity highlighted poignantly in his final scene – when he appears to be left to die alone and his bravado has all but gone.

Clov and Hamm’s scenes together were well crafted and grindingly repetitive in tone and language, their speech rhythms emphasising the monotony of their lives.

John McNeill played Nagg as a quirky mixture of petulant old man waiting to be fed with a cheerful face ​set in the backdrop of terrible adversity. He managed this dual role well and, like Hamm, came into his own when he indulged in telling stories. His warm affection for his wife, Nell, played by Jennifer Flowers was touching. Flowers had the tiniest role but managed to portray her bewilderment and distress with heart-aching simplicity.

Beckett was explicit about the production design as per his stage directions as well as fidelity in his text. The production team of director, Michael Fulcher, and designers Josh McIntosh (set and costumes) and Jason Glenwright (lighting) kept total faith with his intentions. The shabby set of 3 non-descript, colourless, peeling walls leaning into each other – with two high-set windows and one doorway through which Clov enters and exits – had a bleakness that was perfectly realised. The lighting was chillingly atmospheric, adding specific focus to the set design and the main action of the characters.
While Beckett requested no music or sound effects during his play, sound designer Guy Webster gave us some mood-enhancing music prior to the show that morphed into an entr’acte of almost nuclear-like doom. This music seemed to suggest we were in a post-apocalyptic world, perhaps these four characters being the last people on earth. This sound scape also sharply contrasted with the ordinariness of Clov’s first entry and his semi-comic moving and setting up of ladders to great effect.

Michael Futcher’s direction was unerringly intelligent and thoughtful. He gave a straightforward and truthful rendition of the work, playing the comedy and tragedy in equal measure and bringing Beckett’s words to life colourfully in the storytelling of both Hamm and Nagg. He shaped the narrative with an emphasis on the poetic rhythms, particularly between Hamm and Clov. The addition of Hamm’s Irish accent created a heightened realism that worked particularly well.

Shake & stir theatre co, in partnership with QPAC, have created a production of integrity and excellence. Following hard on the heels of the acclaimed STC and MTC productions in 2015, they are to be commended for a finely tuned, well-imagined and ultimately disturbing and thought-provoking work by a master wordsmith.