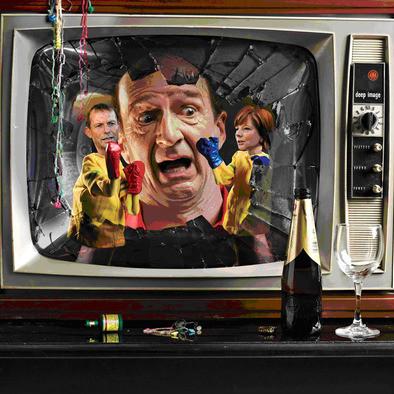 David Williamson’s 1971 play Don’s Party is justifiably lauded as an Australian classic on par with Ray Lawler’s Summer of the Seventeenth Doll, and more recent gems such as Andrew Bovell’s Speaking in Tongues and Tommy Murphy’s Holding the Man.

Set on the night of the 1969 Federal election, it captured the national character in a new light, with an honesty that was sometimes shocking when it was first performed in 1972. The play established Williamson’s now much-diminished status as the leading satirist of his country – and of his tribe, the Baby Boomers – and was a frank and insightful observation of Australia at the dawn of the Seventies, exploring the world of the recently educated and socially mobile middle class as they struggled with their ties to an Ocker past.

Simultaneously it depicted Williamson’s now familiar twenty-something characters as they faced up to the uncomfortable reality of their fast-fading dreams; a theme which is still very much relevant today as the oldest members of Generation X move into an uncomfortable middle age.

Forty years since Williamson wrote Don’s Party – and seven years since he announced his short-lived resignation as a playwright in 2004 – he has returned to its characters in Don Parties On, which had its world premiere in Melbourne on Thursday January 13.

Once again, an election night – the 2010 Federal election that saw Julia Gillard’s Labor Party almost defeated by Tony Abbott’s Liberal-led Coalition – provides Williamson with the excuse to bring together a ragtag cast of characters, some of them familiar from the original play, some appearing for the first time.

Failed novelist turned school counsellor Don (Garry McDonald) and his long-suffering wife Kath (Tracy Mann), an academic, are throwing the party in their comfortable Lower Plenty home (a magnificently realised set by Dale Ferguson which features everything from a water feature and a split level lounge room, to luxury cars parked in the back yard).

While many of their original guests are dead or missing in action, several familiar characters have come to the party: Don’s old friend and sparring partner Mal (Robert Grubb), financially reduced from when we last saw him but still arrogant and argumentative; Mal’s estranged wife Jenny (Sue Jones), now a state Labor minister in a failing government; and the swaggering, cocksure lawyer Cooley (Frankie J. Holden), now extremely wealthy and a Liberal voter, but also emphysemic and clutching an oxygen cylinder.

Around sound-bites of Kerry O’Brien discussing the unfolding 2010 election results, Williamson’s assemblage of characters bicker, bellow, and pontificate. Here one of the first flaws of the play becomes quickly evident: these constructs don’t speak in dialogue, they talk in exposition and rhetoric, sounding more like Williamson himself than well realised characters.

Too, they’re thinly drawn; two dimensional at best (with the sole exception of the caustic and cutting Jenny, who brings some much needed life to the party when she arrives). At worst, in the case of the snivelling man-child Richard and Roberta, his drama queen lover, they’re totally one dimensional; an impression that is not helped by both Gilshenan and Shiels badly overplaying their roles, a fault that can only be laid at the feet of director Robyn Nevin, who should have pulled them back.

Other faults in the production, such as the static blocking of the characters on stage, are definitely Nevin’s fault also, but most of the flaws in the play are clearly Williamson’s.

The men talk mainly about their dicks and their incomes, the women about clothes and their children, endlessly repeating the same clichéd character tropes until they become tiresome.

The plot is mechanical and unrealistic – there’s no reason for any of these people to stay together for the course of the play beyond the playwright’s demand that they do so – and while Williamson may be trying to satirise the Baby Boomers’ endless romanticisation of their halcyon days by having his characters criticise Generations X and Y for their lack of direction and purpose, such comments come across as a bitter tirade rather than as genuine satire.

The play loses further ground after the interval, when even the most interesting character is reduced to drunken clichés, while the plot itself goes nowhere, with the only real dramatic revelation in the entire piece strangely muted and completely overshadowed by Shiels’ unrestrained and frankly painful overacting.

There’s no depth in Williamson’s drama – and while he claims in his programme notes to be exploring “what has happened to Australia in those forty years” since writing Don’s Party, there’s no real sense that he has tried to grapple with any real historical truths save superficially.