This year’s annual showcase exhibition in Alice Springs showed that while the Indigenous art market may be slowing somewhat, the artists most certainly are not.
Emily McCulloch Childs
[This is archived content and may not display in the originally intended format.] 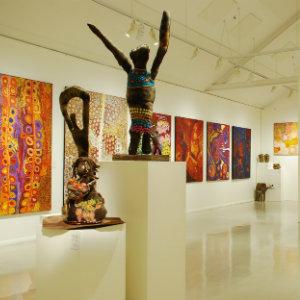 The most important event on the art calendar of Indigenous art from Central Australia and the west, this year’s annual showcase exhibition in Alice Springs showed that while the market may be slowing somewhat, the artists most certainly are not.

In an exhibition of greater overall quality than last year’s, Desert Mob this year ticked most of the boxes that it is known for: it showed strong, vibrant works by major artists, new works by emerging artists of great talent, and works for all levels and types of art lovers, from the most knowledgeable, sophisticated collector, to the local Alice Springs public and overseas tourists who may be viewing Aboriginal art for the first time.

The art centres whose work particularly stood out included, once again, the powerhouse, sophisticated painting movement from the APY lands: the communities in northern South Australia of Ernabella, Amata, Fregon, Indulkana, Mimili, and their neighbours further west: the art centres Ninuku Arts, Kayili Artists, Tjungu Palya, and Warakurna Artists. From this region, only Papulankutja Artists, from Blackstone, and Tjarlirli Arts, failed to excite, compared with previous years.

Stephen Williamson, Araluen’s curator, obviously put a great deal of thought into the hang of this show. It is not an easy job: almost 300 works fill the three gallery spaces, and as anyone who has hung an exhibition of bold, powerful Indigenous art will know: the works can ‘fight’ one another, competing with colour and line of form, so that the hang is not cohesive.

Williamson’s hang was clever, perhaps too clever for the art centres whose work he broke up: hanging a painting around a corner if it didn’t work with the other works. But the effect: the wall of sublime paintings from Tjungu Palya, bookended by works of similar quality from the West Australian art centre Martumili, hung imaginatively in a pattern on one wall, then in a neat line on the next, as one example, was simply stunning. Like last year’s wall of Tjala Arts paintings with Yarrenyty Artlere soft sculptures placed in front: these little elements of the exhibition, almost like works of installation art in themselves, delight the viewer.

And yet there were some drawbacks: Desert Mob is largely a buyer’s exhibition; collectors, dealers and fans come from all over Australia (or the world – I was next in line to a couple from Seattle who have recently fallen hard for Aboriginal art) to queue to buy great art at affordable prices, and the hang didn’t allow for ease of locating works, but rather how well the works sat together. I don’t mind this as an art viewer, but collectors and the art centres may feel differently (reports show, however, that sales were strong). There was also some interruption to sculptural concepts: Johnny Young’s Emu and Chicks sculptural set had its artist’s intentions disturbed by separating the mother emu from her chicks, for example. A brilliantly witty carved and painted road train by Billy Kenda was placed down so low as to almost get lost in the show.

Yet the overall effect was, for the most part, wonderful. It is gratifying to see such thoughtful curatorial work happening in Indigenous art.

As for the art itself: there were, as always, quite a few works of brilliance. The most exemplary were paintings by NATSIAA winner Dickie Minyintiri, Niningka Lewis and Pantjiti Lionel from Ernabella, the collector’s favourite, the late Ben Holland and a truly sublime Tommy Mitchell from Warakurna, as well as a decent work by Carol Golding, an artist who I think is one of Australia’s greatest painters. This art centre also exhibited a collaborative triptych by Ian Newberry and Daphne Larry depicting the events of the Circus Waters massacre, an important historical work.

Iwana Ken’s works on paper, from Kaltjiti Arts and Crafts, were wonderful renderings of events: family groups travelling between ancestral sites, in the unusual medium of graphite, ink and gouache.

From Mimili Maku Arts, the major painter Milatjari Pumani, with her transcendent fields, continues to delight, as does her daughter Betty Pumani.

Ninuku Arts have a star in the making with Sandy Brumby, who was holding his solo exhibition nearby at Raft Artspace. He has a unique style, an unusual, varying palette, a genius for comprehending the spacial concepts of painting, and a profound spiritual quality that creeps up on the viewer, entrancing and bewitching. Their Angampa Martin painting was also notable.

The entries from Tjala Arts were not as overwhelming as last year’s, but Wawiriya Burton, Ruby Williamson and Ray Ken’s paintings were all solid works, the Burton particularly joyous, and the Barney Wangin painting of Punu, signifying the importance of trees to Pitjantjatjara men, with its combination of imagery and text, was an experimental and fascinating work.

The shift is still continuing from the once top art centres to the new ones coming up, and again it is most apparent at Desert Mob. Papunya Tula Artists and Warlayirti Artists (Balgo), once royalty, were weaker overall than the APY lands centres. A single majestic Eubena Nampitjin, heartbreaking in its beauty, shone from up high on a wall, but its price was to match, and while this senior artist’s work was once fought over, she now has many others to compete with.

Martumili Artists’ work by Nora Wompi and Jakayu Biljabu, Bugai Whyoulter and Nora Nungabar, for example, were easily as impressive. The Nora Wompi in particular stood out as a particularly serenely beautiful, significant work.

The punu (wood carving) from Maruku Arts and Crafts, of Mutitjulu, was again exemplary and clever, as was the tjanpi (weavings) of the Tjanpi Desert Weavers. The local art centres, some based in Alice Springs town camps, Tangentyere Artists, Yarrenyty Arltere Artists, Ngurratjuta Iltja Ntjarra Art Centre, Mwerre Anthurre Artists (Bindi Inc.) and the prison artists Greenbush Art Group, all continue to grow and shine.

One of the most common criticisms of Aboriginal art one hears – and that I heard this year, from a fan of Aboriginal art who is only part way along the road of Indigenous art knowledge – is about the lack of innovation in Aboriginal art, and of what he saw as a lack of innovation in this exhibition. I have several answers to this. Firstly, a foundational element that everyone should know about Indigenous law: you get what you are given. One inherits one’s designs from parent or grandparent; they are in part like title deeds to land. Designs are related to the creation of that land, through the totemic ancestors who shaped it, and whose life force is embedded in that country and kept living through ceremony, in which the designs are used. There is the concept of inspiration in Aboriginal art, many artists do come up with their own way to depict a tjukurrpa design, but often this becomes their central trope in their art.

Consider the 40-year exploration of the Tingari line and square design by the Pintupi op artist George Tjungurrayi, who is now, as an older man, painting his designs usually seen on massive canvases on a smaller scale. For me, Tjungurrayi’s work never gets tired. His best work always excites me, even though I may have seen many like it before. And there are many like him. I see no difference between Tjungurrayi and Western artists such as Bridget Riley or Robert Hunter, artists who have devoted a lifetime to exploring a thematic concept. There is nothing wrong with this; it is no different from a scientist who devotes their life to studying one species of plant or animal whose research can actually reveal much about the larger world.

Then there are artists who suddenly and dramatically change their style, either for the better or for the worse. I may be missing something, but I fail to see a lack of innovation in Aboriginal art: every year Desert Mob has several new and exciting art innovations for me to marvel at.

Often, I find experimentation happens most in 3D form. This year the wonderful painted wooden kettle from Niningka Lewis, working here through Maruku Arts and Crafts; the painted birdhouses by Kukula McDonald and Jane Mervin from Mwerre Anthurre Artists; the magnificent wire and wool kangaroo from Edwin Ward of the prison artists of Greenbush Art Group; the move into wire weaving of emus by the important sculptor from Titjikala, Johnny Young; the new directions in Ernabella pottery, where their experimentation has taken them into brave new works in black or simple white ceramics of organic forms, and a new gentler palette leading to increasing levels of sophistication, were all examples of wonderful innovation. It is always exciting to see Desert Mob and what new and interesting works these diverse artists have come up with.