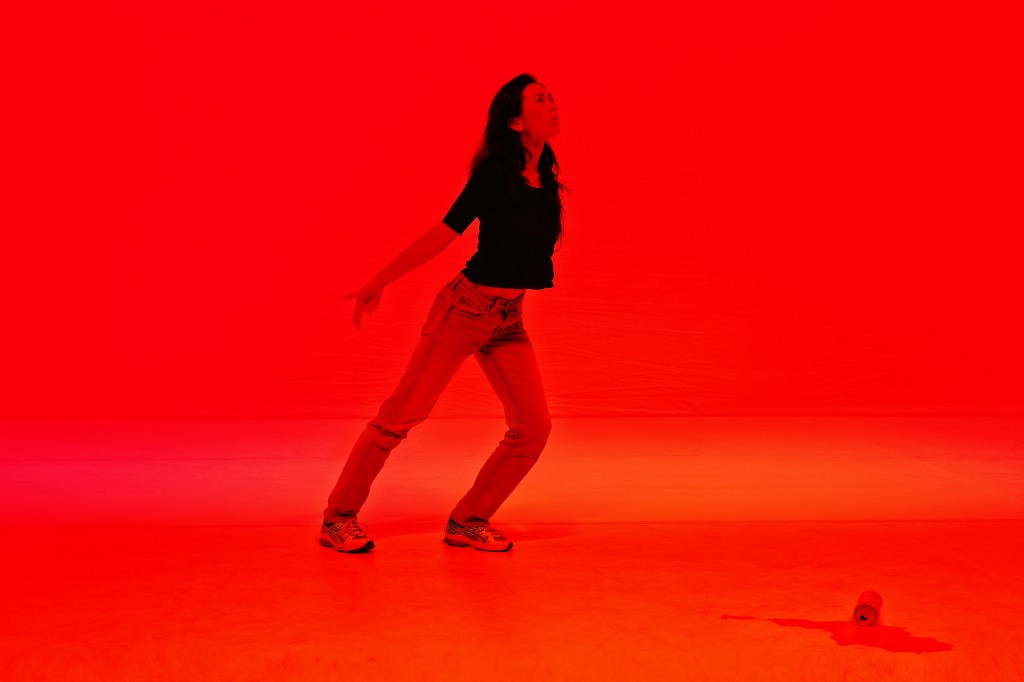 ‘A thought-provoking performance from one of Australia’s most exciting contemporary choreographers.’ Photo by Prudence Upton.

Sky Blue Mythic, created by Angela Goh (a previous winner of Keir Choreographic Award), was a blinding, disorienting performance that swayed between tension and flow, exploring the strangeness of the post-anthropocene.

At various points in the piece, Goh possessed the smoothness and jitteriness of automata, while her vital signs – breath and a deeply emotional, faraway gaze – gave away her humanity. The way she moved across the stage at various points as if in retrograde and the contortions and inversions she performed with her body were impressive. One such moment was where she inverted a plaintive singing cry so that as she contracted her spine she ‘caught’ the note back in her mouth. It was an eerie effect, enhanced by the soundtrack, a chorus of cries, composed by sound designer, Corin Ileto.

There were other moments in the performance where the effect was like a broken record or stuck nerve, as Goh pivoted around a limb, keeping the rest of her body ultra-still. Her countenance throughout the entire piece was the apogee of composure, her eyes wide, her face lineless and her glare fixed. Her arms at times moved like perfect mechanical butterflies, at other times like satellites, shadowing her face. Her movements often mapped diagonal and circular planes across the stage, emulating a sundial, which was a focal part of the scenery in the opening scene. It was remarkable the way Goh was able to ruche forwards and in reverse, like a thread was being pulled along her body, emulating the creases in her crop top.

The final movement in the piece, Goh massaged her body slowly, a trembling tension in her legs, culminating in ‘pulling’ herself forward with her fingers in her mouth, like a fish being dragged by a hook. It was unnerving and perhaps spoke to the theme, mentioned in Goh’s artistic statement, of ‘moving away from human centrism in favour of caring for the tangled relations that make up our more-than-human worlds.’

Goh cites influences for the piece: ‘The Romantic Ballet Giselle, Tarkovskyian Cinema, the Japanese anime Sword Art Online, the brilliance of Borges’ Garden of Forking Paths, the perfection of Malevich’s Red Square, Maria Takeuchi, Sadie Plant, the total whimsy of Edwin A Abbot’s FlatLand: A Romance of Many Dimensions, The OA, Spinal Catastrophism, Hard to be A God, planetary scale computation, Copernican enlightenment, Walter Benjamin’s Angel of History, Xenofeminism, the persistent problem of the arrow of time, or the song “Dreams” by The Cranberries.’ A medley that was perceptible and made some curious sense over the duration of the piece.

We were warned of ‘extreme lighting’ before we entered the auditorium, which included vibrant filter changes from red, green, blue, etc, to sudden plummets into darkness and light and strobe lighting. We were not told of the loudness of the score however, which I feel may have been an oversight as the heavy industrial sounds were edging upon painful in a few moments and detracted a little from the artistry of the dance. This may have been the desired effect, and everyone is different in their tolerance of noise but overall Sky Blue Mythic was a thought-provoking performance from one of Australia’s most exciting contemporary choreographers.

Sky Blue Mythic will be performed until 19 March 2022