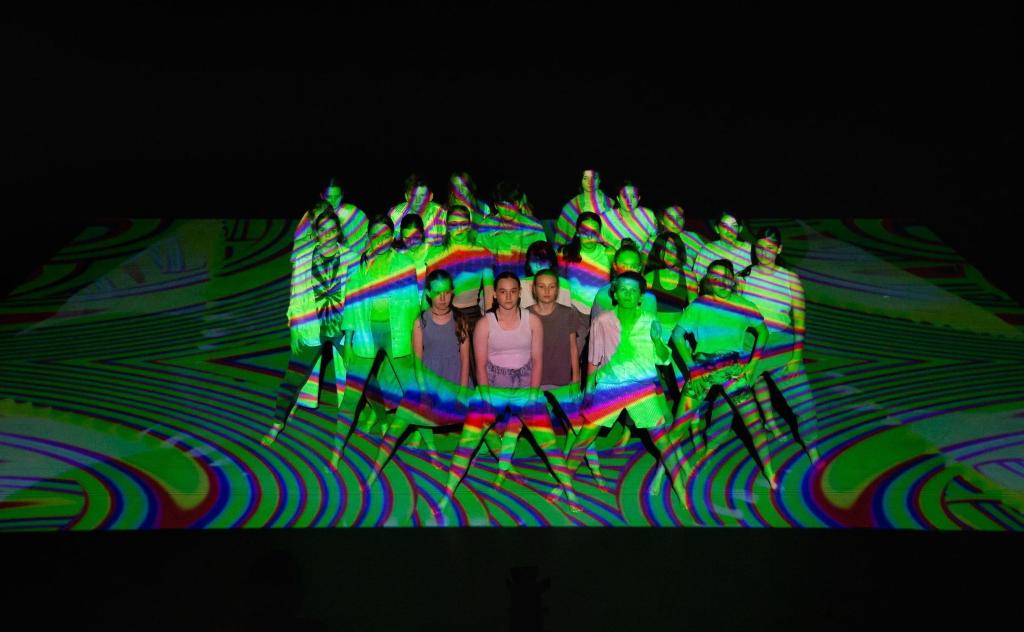 Once more Dancenorth proves the notion that collaboration will remain a key to their success. For the past few years there have been some extraordinary collaborations which have seen the company carve an enviable national and international reputation.

Focusing on one of the other arms of the company – Dancenorth’s burgeoning community experience program now being led by Alice Lee Holland, whose breadth of national experience in the youth dance sector has been showcased in the first collaborative work in Townsville for the community.

This time – and no doubt to be duplicated in the future – Dancenorth has collaborated with two equally talented Townsville identities: renowned Queensland theatre personality and TheatreiNQ education co-ordinator, Arminelle Fleming, and an amazing sound and visual team Diffractive Collective.

‘The production values and design concepts perfectly complemented the creative content for what was to be a thoroughly engaging, engaged and entertaining project.’

Backed by the Dancenorth team, this set of collaborators embarked on what was to prove to be a pioneering production – Safety Net, which played for a limited season in Townsville last week.

With all the characteristics of high end production, I certainly have not seen the likes of this quality of production in the community collaboration space before. The fact that it is called a community experience program is where the reference to community begins – and ends. There was nothing remotely down-home or ‘community’ about this. The production values and design concepts perfectly complemented the creative content for what was to be a thoroughly engaging, engaged and entertaining project.

For many of the two dozen young 11-17 year-olds performers who participated, this represented an enormous challenge to them. Some with dance background and others with theatre background, they all had different expectations – but mostly that they did not believe (or expect) to be challenged to create their own work. And within a very limited rehearsal/creative period, the two director/collaborators worked closely to tap into the young people’s the feelings, thoughts and experiences to find an inspiring 60-minute production.

What was even more impressive was the fact that it was clear that the movement and words were plainly from the performers themselves. Nowhere was there any evidence of a superimposed movement or word from any dance of drama teacher. The collaboration between Holland (responsible for concept, direction and choreography) and Fleming (script and co-direction) was a winning combination which facilitated and showcased the young talent, allowing the spotlight to fall deliberately on the performers. These 24 young folk share the creative plaudits and displayed an emotional maturity and performance standard way beyond their years.

Safety Net began with the image of a net projected and marked on the stage in the form of a grid which changed shape, form and purpose through the course of action. This was achieved through a stunning lighting and visual effects, which effectively ‘projected’ the entire production into a different realm. These effects did not detract from the movement which was clearly within the capabilities of the performers who were all given opportunities to show their mettle individually as dancers or actors while at the same time appearing as a cohesive team.

As much as Safety Net challenged the performers to create, question and experiment, the audience too shared some of this in a piece that had no explicit storyline or resolution. It is difficult to put into words what was essentially simply an experience. Performing within a clearly defined stage space and performance structure, this was no work of defined choreography or ‘sticking to the script.’ Instead, the structure allowed for a latitude of movement and freedom of expression which seemed as effortless as it was spontaneous.

Instead it was a kaleidoscope of imagery, words and movement which reflected themes and thoughts in the minds of the performers, and undoubtedly would have elicited individual responses from each person in the audience. Indeed the director invited the audience to “step outside your comfort zone” and encouraged us to “let go of the need to understand in a traditional sense – instead be one to all the different ways you can fully experience the work: what you hear, see and feel as you watch.” (The best advice to bear in mind for many contemporary dance experiences.)

‘These 24 young folk share the creative plaudits and displayed an emotional maturity and performance standard way beyond their years.’

However, it was the visual effects combined with simple but effective movement and movement patterns that allowed the production to be transformative for the audience – just as the creative process was the element of change for the performers.

Charles Wiles’ stunning and entirely complementary lighting design augmented by the visual effects and soundscape from Diffraction Collective contributed to the overall innovative and pleasurable experience.

There is no doubt that there will be a queue of young people in Townsville be lining up to participate in future projects.