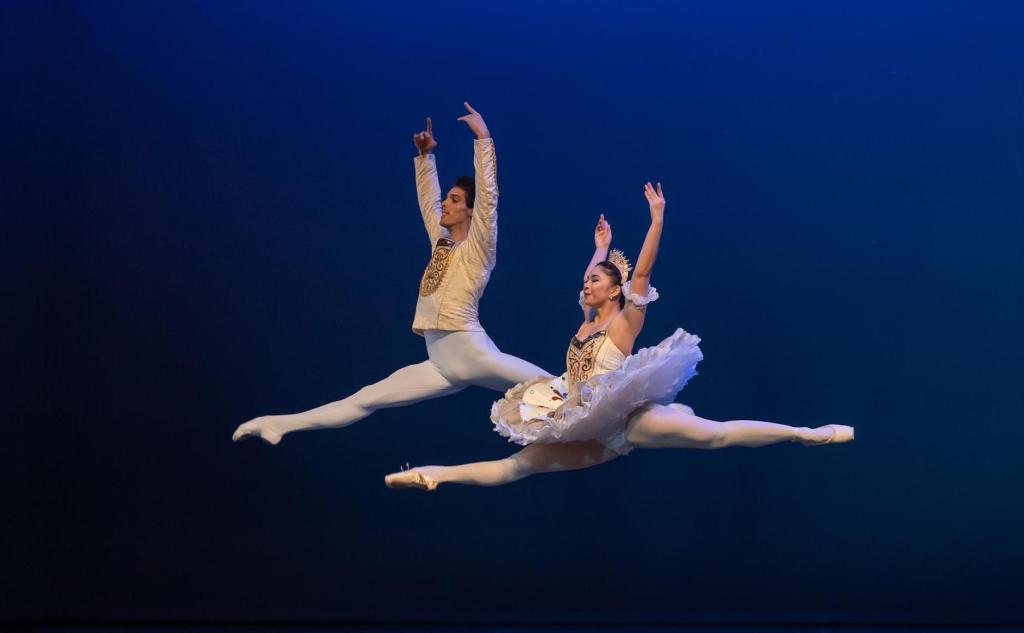 The ramifications of the COVID-19 virus almost dealt a death blow to arts venues around the world. Sometimes, however, the dice rolls in favour and on Thursday, November 19, 2020, the recipient was His Majesty’s theatre in Perth, Western Australia.

Even though restricted to a 60% audience, the theatre was able to open its doors for the West Australian Ballet’s first performance, GALA, of its 2021 season. After such long deprivation, the explosion of joy from the audience began the moment the curtains parted and the sound of Taiko drums hit the roof. As drummers were awakened by a rod wielding ballet stalwart, Matthew Lehmann, similar movements by Tai Chi exponents came to mind.

Some people relate ballet moves to those of footballers. Unfortunately for the arts, the comparison ends there, financially, as premiere sporting matches and rock concerts can bring 150,000 spectators on one day while ballet struggles to reach those figures per year.

Yet the movements on stage of one lead guitarist, in schoolboy garb, could easily compare with that of the ballet’s Matthew Edwardson, performing 100 classic positions in Ballet 101, a creation of Canadian choreographer, Eric Gauthier. For anybody believing ballet was just a series of arabesques and pirouettes, this was a clever, hilarious and enlightening performance with tongue in cheek commentary and every bit as physical as any football moves.

GALA is the brainchild of Artistic Director, Aurélien Scannella, and a showcase full of surprises designed to share highlights of his tenure with the WA Ballet, which began when he took over the role in 2012 and steered the ballet to new heights of perfection and innovation. The enthusiasm of the audience on this evening was not just about release from the confines of Covid-19, it was for the changes brought about by Scannella to encourage a balance of classical and contemporary dance.

The classical he retained with Pas de Deux from Le Corsaire, exquisitely performed by Mayume Noguromi and Juan Carlos Osma, and Don Quixote with Candice Adea and Oscar Valdés,  along with a spirited Tarantella by Kymberleigh Krzysztofiak-Cowley, Jesse Homes, Carina Roberts and Julio Blanes. But, from this point on, the tutus disappeared with the introduction of Acts 1 and 11 of The Great Gatsby. Both were performed, with elegant sensitivity by Chihiro Nomura and Matthew Lehmann in sophisticated, modern dress, a credit to Choreographer and Costume Designer, David Nixon, OBE.

By comparison, classic Romeo and Juliet became Radio and Juliet, a complex, inverted version of the original in which the talented Brooke Widdison-Jacobs, dressed in a bright black and red skin-tight top and tights, interacts with six male dancers, in staccato but sensual movements, no props needed in an almost dreamlike sequence.

It would be impossible to give all the credits that are due for this unusual program but, suffice to say, that Radio & Juliet was performed to the music and vocals of British rock band, Radiohead and all the music for each of the eleven vignettes was recorded by different orchestral companies.

The following three acts were all couched around themes touching on everyday reactions to the imposed isolation of Covid-19 and some of the desperate feelings that could arise in close relationships because of it. The first, CoVid Lab, performed by Beatrice Manser and Brent Carson and the second, Les Indomptés, by Ludovico Di Ubaldo and Adam Alzaim were heart-rending depictions of love and passion, enslaved but not free, desperate for answers.

GALA is the brainchild of Artistic Director, Aurélien Scannella, and a showcase full of surprises designed to share highlights of his tenure with the WA Ballet…

The final modern piece, Excerpts from Architecture of Hope, with music performed by the Orchestra Filharmonica ‘900 del teatro Regio of Turin, had its world premiere in Perth’s beautiful Quarry setting earlier in the year. The candle lit lanterns would possibly have been more effective under that dark sky, but the performances of the eight dancers, so markedly different in stature, small women in red, tall men in burgundy, were superb. Interacting slowly and meticulously, like embracing snakes, every challenging, demanding movement, arabesque, jeté or overhead lift, made you hold your breath.

It is clear why Dayana Hardy Acuna and Juan Carlos Osma, Carina Roberts and Jesse Homes, had been chosen for the Pas de Deux. They were magnificent and for Choreographer, Wubkje Kuindersma, it was a triumph.

The WA Ballet company, the oldest in Australia, is now in its 69th year  and includes 38 professional dancers from nine different countries! A matter of pride for Western Australia, that is a fact that can also take your breath away.