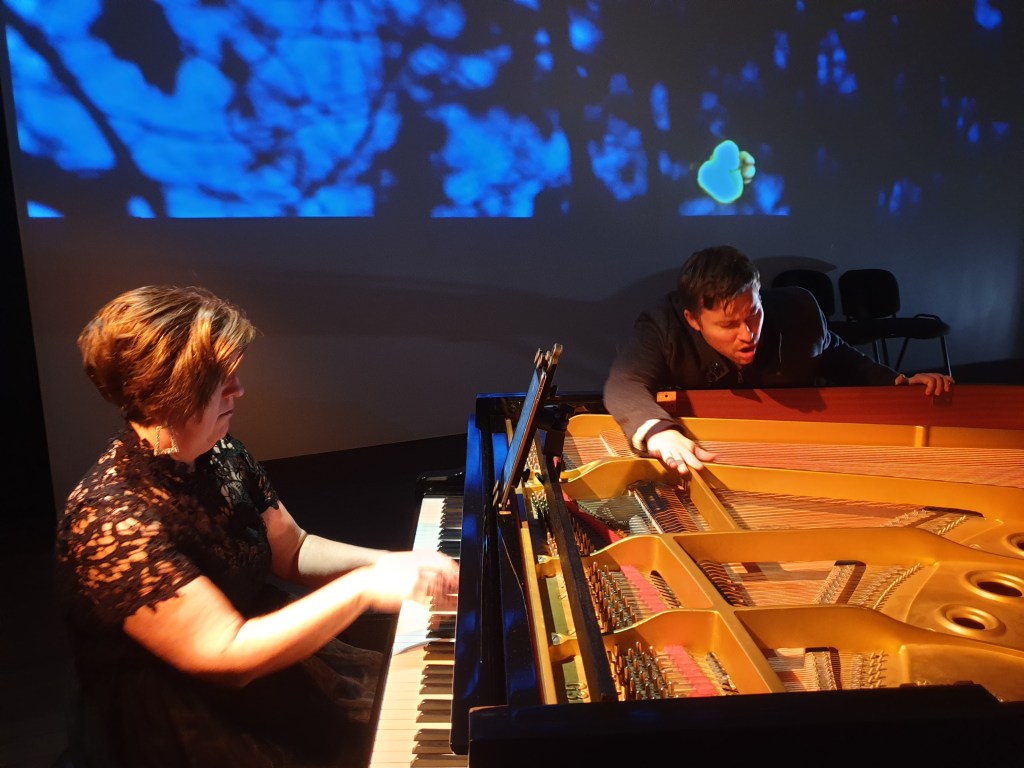 The whole production ‘brims with intelligence, nuance and intent’ including the performance from pianist Amanda Hodder and singer Nicholas Tolputt and pianist. Photo credit: Ben Winspear.

It’s said that to produce Il trovatore is easy – you just need the three best singers in the world. I’m not sure that Winterreise demands the best, but that is what it got in this presentation by Archipelago Productions, which integrated musical and theatrical elements to create an almost flawless experience.

A song cycle of 70 minutes duration, Franz Schubert scored Winterreise for piano and solo voice. Twenty-four individual songs make up the cycle, which follows a sometimes rather random narrative of a spurned lover, and his wanderings in a wintery landscape that is both real and metaphysical – the ‘winter journey’ of the title. Schubert’s desultory drifter questions his identity, his place in the universe, the meaning of life itself. It is by turns longing, ironic, bitter, humorous, despairing. Beckett loved it.

This production removes Schubert’s wanderer from the Viennese salon and unceremoniously drops him in a semi-industrial space, positioning him as our contemporary: as familiar with 21st century alienation as with early 19th century world-weariness. (It’s noteworthy that the term ‘Weltschmerz’ – literally ‘world-pain’ – was coined about the same time as the composition of Winterreise.)

This relocation is boldly done. The venue is a room in the former Hobart Mercury newspaper printery, now the Detached Cultural Organisation. Vestiges of its recent industrial usage linger in this otherwise blank white room. A grand piano stands to one side and the lone singer performs on an elevated white platform before a large white wall onto which are projected 24 short films of Hobart: one for each song. But this is not the Hobart of tourism promotions: all picture-postcard prettiness has been eradicated. This is an uncaring wilderness, grey and cold, oblivious to the yearning and indifferent to the suffering of those passing through it.

Described so baldly, it may sound like a undermining of the subtlety of Schubert’s work, but that is far from the case. The whole production brims with intelligence, nuance and intent. The elements are seamlessly and delicately brought together by director Ben Winspear.

The performers are singer Nicholas Tolputt and pianist Amanda Hodder. Initially, Tolputt tries a little too hard to project the anguish of the character, but in the second half his own raw youthfulness works to his advantage. With boyish vulnerability and simplicity, he conjures a sense of genuine anguish of the heart and soul. It was riveting, and truly moving.

Musically, the evening is superb. The counter-tenor voice can be uncomfortably piercing, and, to my ear at least, a little can go a long way. Tolputt’s voice does not have that cut-glass edge to it but rather is warm and inviting. He is resourceful in his use of colour and texture, and takes the audience with him on his despairing journey. Pianist Amanda Hodder is simply magic.

The whole is complemented by the exquisite cinematography of Martin McGrath working with Eliya Cohen (Second Camera) and finely crafted by editor Peter Brennan.