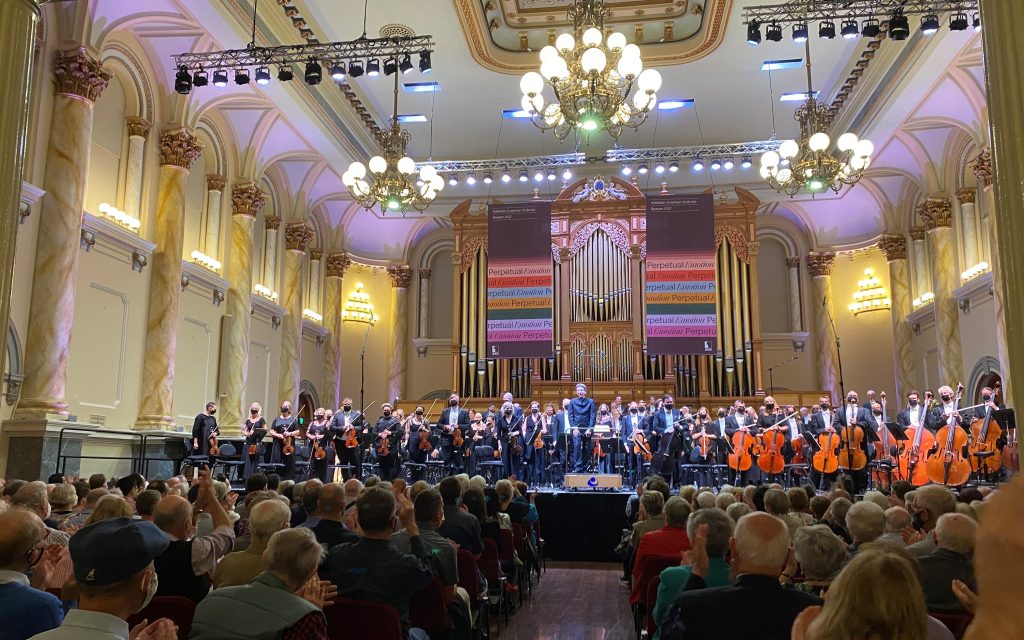 This was an ambitious and colourful program to kick off the ASO’s Symphony Series in style. Image supplied.

‘Perpetual Emotion’ is the marketing theme for the Adelaide Symphony Orchestra’s 2022 season and each of the Symphony Series concerts comes under such a banner, for instance, ‘affirmation’, ‘joy’, and ‘serenity’.

The opening concert of the series was titled ‘julibation’ and it offered much to inspire those feelings of jubilant musical emotion.

After the musical Acknowledgement of Country that’s now a standard feature of each ASO performance, it was straight into the magic of Mozart with the overture from The Marriage of Figaro. This has to be one of the most instantly recognisable pieces in the classical canon and is always a delight to hear in live performance.

Norwegian conductor Eivind Aadland, now with the Tasmanian Symphony Orchestra, imbued it with a crisp and clear energy. Aadland is a masterful conductor with an expressive physical vocabulary that is very engaging to watch.

Next came Clara Schumann’s delightful Piano Concerto in A Minor, that was indeed jubilant. Pianist Andrea Lam played with flair and verve, bringing each movement to life in a musical celebration. Lam’s quick, gentle touch and freedom of expression really highlighted the intricacies in Schumann’s  score. She really was mesmerising in the opening allegro maestoso movement. Principal cello Simon Cobcroft also deserves a special mention for his stellar contribution to this work in the marvellous solo part. It is astonishing that Schumann could write such a delightful and complex piece when she was just 14 years old.

The Adelaide audience was suitably impressed and rewarded Lam, and the ASO, with rapturous applause. A short encore of Schumann’s Romance in A Minor followed. This is a much more mature work but was again emotionally charged. As Lam explained, Schumann was feeling very sad when she wrote it, and that sadness can be felt in the achingly beautiful work. And I have no doubt many in the audience shared Lam’s feelings when she said ‘I can’t tell you what a joy it is to make music again’. Bravo to that!

Read: Dance review: Thomas Woodman, A dead-end in itself

After interval, it was onto the main business of the evening, and 70 minutes of Mahler’s towering Symphony no 5 in C sharp minor. The Fifth is undoubtedly one of the most impressive, and challenging, works in the orchestral repertoire. Its sheer size is one thing, with the players ranged over an expanded and stepped stage just to fit them all in. And the complexity is enormous, both musically and emotionally. At its peak, it’s like a giant wave of sound filling the auditorium. From funereal to celebratory to almost sacred, this is the full gamut of human experience in one orchestral composition.

Each section of the orchestra pulled its weight, with particular highlights for the brass and horns. Principal horn player Adrian Uren was impressive in the solo in the scherzo, taking his place centre stage and then returning to the ranks, and principal timpani Andrew Penrose made a powerful contribution throughout. The opening of the ‘very slow’ adagietto with the harp and strings was superb and, of course, the finale was full of Mahlerian drama. Aadland kept a tight rein on the orchestra, wisely choosing controlled emotion over sheer firepower. And the climax, when it finally came, was all the more impressive as a result.

This was an ambitious and colourful program to kick off the ASO’s Symphony Series in style.