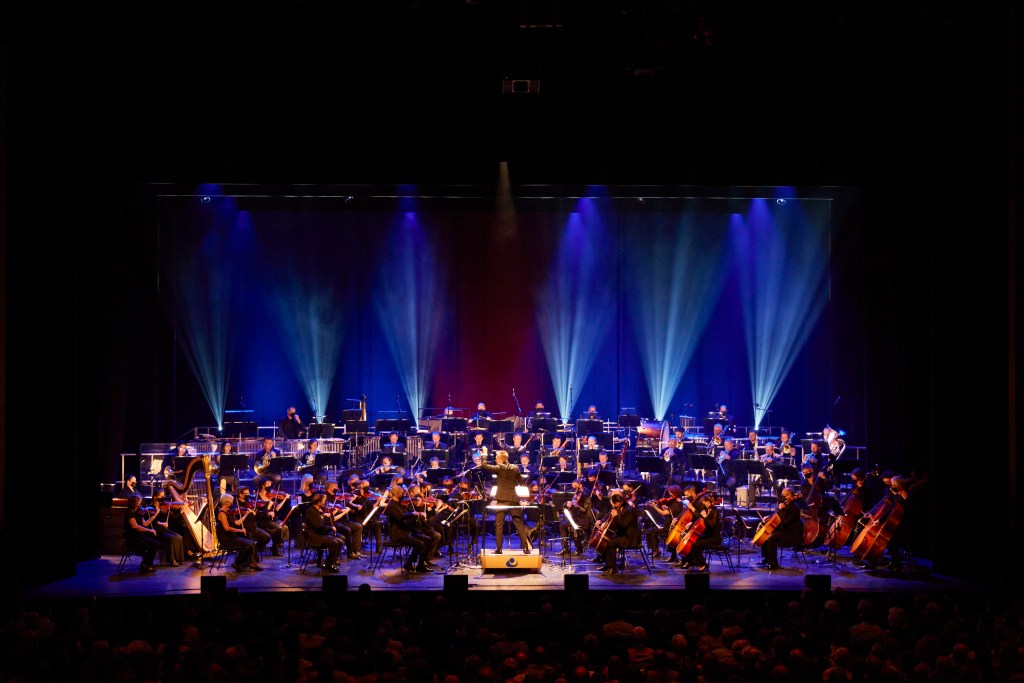 A marvellous musical journey through the greatest movie themes of the last 50 years. Photo supplied.

The Adelaide Symphony Orchestra’s program of great movie music was cause for celebration in more ways than one. It was the ASO’s first showcase concert of the year; it celebrated the 90th birthday (just a few days before the performance) of acclaimed composer, John Williams; and it marked the grand reopening of the Festival Theatre, previously closed for months for extensive refurbishment and outdoor rejuvenation.

There are now two redeveloped and spacious entrances to the Theatre and the much-loved artworks by celebrated artists including Sidney Nolan, Fred Williams, Max Lyle, and Ian North have been reinstated. The audience was clearly delighted to be back, even with the ongoing irritations of masks, COVID apps and bio-cups (can the grown-ups please have proper glassware when they buy a bottle of bubbly?). Their enthusiasm was palpable in the standing ovation, not something an Adelaide audience does without due cause.

But that’s putting the end before the beginning. The concert opened, as always now, with the moving musical Acknowledgement of Country by Jamie Goldsmith.

From there it was a marvellous musical journey through the greatest movie themes of the last 50 years with the full-stage orchestra under the baton of conductor Nicholas Buc, who made a charming host for the evening. Almost every movie you’ve ever loved, from Star Wars and Jurassic Park to Indiana Jones and ET The Extra Terrestrial was featured in the concert that extended joyously over its advertised two hours.  And, of course, there was ‘Harry’s Wondrous World’ from that Potter movie.

The program went beyond the Hollywood blockbusters to include a few lesser known movies such as ‘Remembrances’ from Schindler’s List, the theme from Angela’s Ashes, and a lovely arrangement of excerpts from Fiddler on the Roof, the score for which Williams won his first Academy Award in 1972. Since then, he’s won a swag of awards, including Oscars, BAFTAs, Emmys, and Grammys, and has received more than 50 Oscar nominations. It’s said that when Spielberg first discussed Schindler’s List with John Williams he observed that it really needed a far greater composer than him to do justice to the film, to which Spielberg replied ‘I know, John, but they’re all dead’.

That Williams is a master of orchestration goes without saying. He has scored over a hundred films and also written many classical pieces, with almost 100 concert pieces, including a dozen full-length concertos, to his credit. Williams is also a superb melodist and has an acute feeling for creating atmosphere and evoking the full emotional range which made his partnerships with directors Spielberg and George Lucas so incredibly successful. The 40-year Star Wars franchise included nine soundtracks by Williams and they were well represented here. The Empire Strikes Back may be ‘the greatest film score ever written’ said conductor Nicholas Buc.

Acting concertmaster of the ASO, Cameron Hill, showed all his skill in a beautiful solo for the Schindler’s List piece and in the intricate lines of Fiddler on the Roof. Many other players were given the opportunity to shine too, including clarinettist Dean Newcomb in the haunting ‘Viktor’s Tale’ from The Terminal and harpist Carolyn Burgess in ‘Remembrances’. And there was a fond farewell for the principal tuba, Peter Whish-Wilson, on stage for his final performance after a stellar 45 years with the orchestra. Bravo, Peter!

The full-stage orchestra was complemented with some rather nice lighting and each piece was enhanced by a few well-chosen comments from Nicholas Buc. The excellent program notes included an apposite quote from Spielberg: ‘Without John Williams, bikes don’t really fly. Nor do brooms in Quidditch matches. Nor do men in red capes. There is no Force. Dinosaurs do not walk the earth. We do not wonder. We do not weep. We do not believe.’

On this occasion, we did believe, and we all went home happy after that standing ovation for the ASO and John Williams at 90.