Variations of orchestral delight across time and place.
Barbara Booth 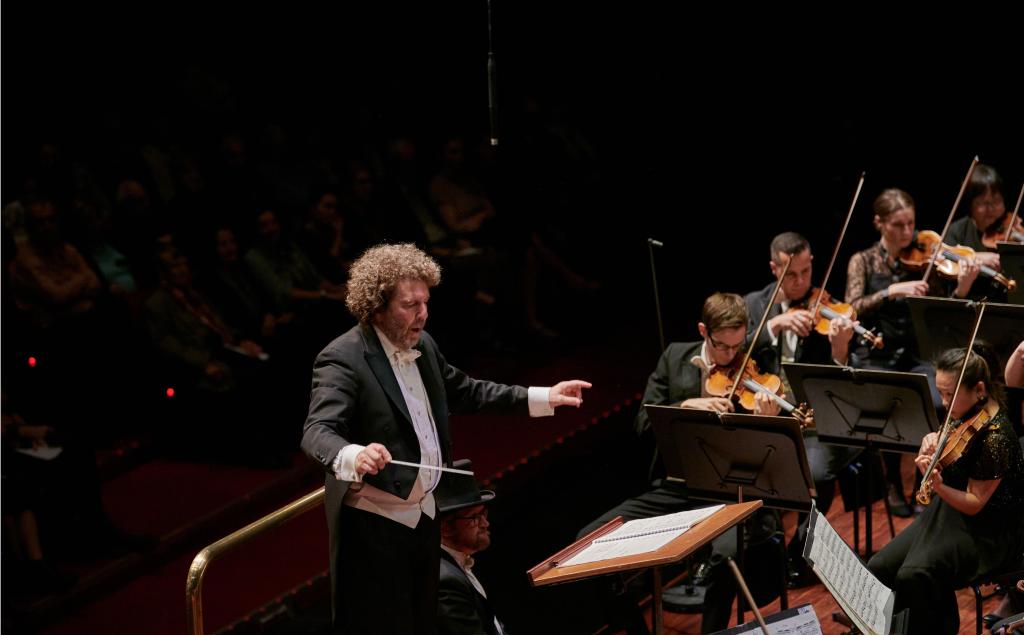 Conductor Asher Fisch spinning the threads that bind the many parts together at the WASO. Picture by Rebecca Mansell.

Western Australian Symphony Orchestra (WASO) chose an interesting time frame for its concerts on 18-19 June in Perth Concert Hall: from 1946 back through 1937 to 1808!

In 1937, Benjamin Britten, only 24 years of age, was already a brilliant musician and composer. He produced his ‘Variations on a Theme of Frank Bridge’ as a tribute to the composer who’d been a mentor to him throughout his musical development. Virtually a litany in ten parts of the techniques Britten had mastered, from adagio to waltz, from the influence of idols like Mahler and Korsakov, and from romance to goose-stepping and a funereal march, each section paid homage to a quality in Bridge’s character.

For WASO’s Principal Conductor and Adviser, Asher Fisch, a man with extensive talents and interests, the Variations even provided a glimpse of 19th-century opera, of which Fisch is widely versed. Under his sensitive direction, and precise hand and arm movements, the string section almost leapt to attention in their seats, bows aloft, at the end of each dramatic sequence. But these Variations are compact and detailed, using every section of the orchestra. They need far greater explanation than I have room for here, so my hat’s off to the WASO program organisers. To have a Pre-concert Talk is always a joy, but to have an illustrated breakdown of the meaning of these Variations described in detail in the small program guide helped explain the deeper world of musical theory.

Following the Variations with the ‘Young Person’s Guide to the Orchestra’ also gave those unfamiliar with orchestral movement an opportunity to enjoy the lesson delivered in mellifluous tones by narrator, Iain Grandage. Grandage glided through the narrow pathways in the orchestra to identify, with humour and fun, first the four major sections of woodwind, then brass, which he stated needed ‘lungs of iron and lips of steel’ and strings, ‘the heartbeat of the band’ and percussion with those big kettle drums. But it was the conductor he referred to as ‘wielding the stick that made no noise’  who ‘spun the thread that bound the many parts together.’

Britten may have had many reasons for producing the ‘Young Person’s Guide to the Orchestra’, just nine years after the Variations, but countries that had been producing great composers had been at war, which deprived people of music and opportunities to compose and perform. Reminding people of the value of every instrument in an orchestra must have inspired many at the time and still does today.

Using ‘A Theme of Purcell’ who had died 250 years ago, around the time of Beethoven’s birth, also reminded us that good music will stand the tests of time and that many wonderful instruments like the star drum, the triangle or the whip rarely get a chance to shine. With a deep bow and a wave of his top-hat to conclude, Grandage invited the orchestra to display all their talents in three magnificent minutes, finishing to thunderous applause and the words, ‘This is your WASO!’.

Ludwig van Beethoven composed his Pastoral Symphony No. 6 in F Major Op 68 in 1808 when he’d almost completely lost his hearing from lead poisoning. Most of the people in the audience would’ve known the gentle theme that grew from french horn to oboe to flutes, clarinets and seamlessly, to bassoons, but, now, the soloists, especially the clarinets’  ‘cuckoo’ sounds and the shepherds’ flutes could be recognised instantly, as fresh and distinct as when they were brought to life so long ago, by a man who could barely hear the sounds himself.

For Beethoven, visiting the countryside in Heiligenstadt, outside Vienna, was his favourite means of relaxation, surrounded by the beauty of nature. At age 32, he had enough hearing left to relish the sounds of flowing water he would then depict through flute and oboe solos, as well as the chirping of birds and buzzing of bees, people dancing and the darker days of thunder and lightning.

For such a sublime and beautiful legacy to survive one person’s suffering only adds to the gratitude people must feel when they listen to The Pastoral Symphony.

Beethoven could still see, however, and perhaps some vision of the country scenes on the background, behind the musicians, could involve the audience even more in Beethoven’s whole experience.

It should also be noted, especially before the final event, that a Personal Hearing Assistance system is available for every seat at Perth Concert Hall,