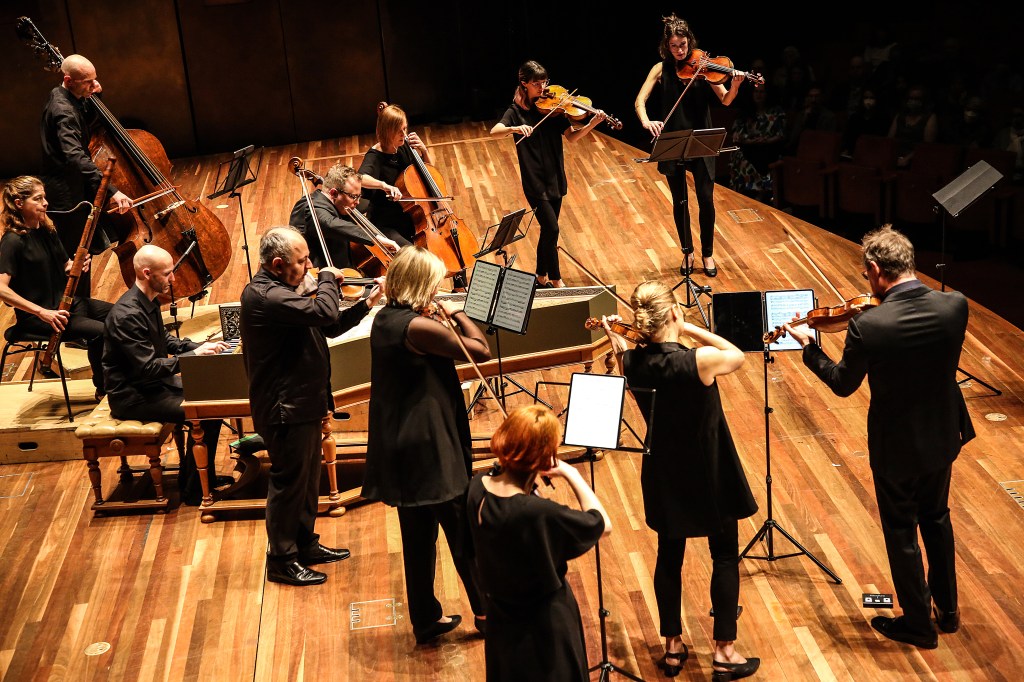 The spirit of the grand old master of music Johann Sebastian Bach has been infusing the Adelaide Town Hall this week. First, Paul Grabowsky and Andrea Lam mused upon Bach’s magnificent Goldberg Variations. And now Sydney’s acclaimed Australian Chamber Orchestra has filled the Town Hall with compositions by the many musical Bachs – not just Johann Sebastian, but also Johann Ludwig Bach, Heinrich Bach, Johann Christoph Bach, and Carl Philipp Emanuel Bach. The intriguing program was rounded out with a few pieces from other composers who had been inspired by the Bach family legacy.

Richard Tognetti, the ACO’s artistic director and violinist, is an undoubted Bach aficionado and that depth of knowledge infused this performance. From the opening notes of the overture to Johann Ludwig’s Suite in G Major to the closing bars of Carl Philipp Emanuel’s robust Cello Concerto in A Major, this was an impressive performance.

With a dozen players on stage for most of the recital, including Erin Helyard swapping between the harpsichord and the fortepiano, the ACO led us on an invigorating musical journey exploring the astonishing influence of this amazingly musical family.

The brief excerpt of Robert Schumann’s Six Fugues on the B-A-C-H theme offered a moment’s contrast, although the decision to play the two preceding pieces without a break clearly created a little confusion for the audience.

Then came the first of three vocal pieces, a cantata by Johann Christoph. This was sung with superb clarity and warmth by mezzo-soprano Anna Dowsley.

After interval, there was a dramatic change of pace as the ACO opened with a short work, Reflections on the Theme of B-A-C-H by modern Russian composer Sofia Gubaidaluna.

From there it was back to more familiar ground with the Bachs complemented by the beautiful slow movement from Mozart’s Piano Concerto no. 12 in A Major. Mozart was a great friend of Johann Christian Bach to whom this composition was a musical tribute.

The recital ended with the longest work on the program, the marvellous Cello Concerto by Carl Philipp Emanuel Bach, played with astonishing verve and agility by soloist Timo-Veikko ‘Tipi’ Valve.

As usual, the players were standing (with obvious exceptions) allowing them some personal expression as they played. And the precious period instruments, including Tognetti’s 1743 ‘Carrodus’ violin and the three (yes three!) Stradivarious violins, and Jane Gower’s Baroque bassoon, give these ACO performances a genuine historically-informed sound.

A special mention should be made of the excellent program for the Bach series that includes an extended essay by Bach scholar Sir Nicholas Kenyon and some reproductions of selected artworks that were influenced in some way by the music.

This was an interesting and perceptive program by Tognetti, offering a satisfying mix of familiar and lesser-known works, and an altogether excellent performance from the Australian Chamber Orchestra… ‘Bravi’ indeed.

Bach was performed for one night only in Adelaide on 21 June 2022.