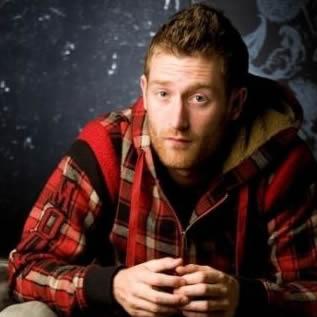 Dozens of empty seats, a crowd of 16 people – not necessarily a sign of failure for a five day season during a 26 day, 200 plus, festival. Walking out angry from comedic (?) entertainment… now, that’s a horse of different colour.

Berwick-living, Kiwi Brader is also a former white-collar advertiser burned by corporate world inanity. Subsequently, this is a man on a revenge reconnaissance bringing much cynicism and smite into the ClubFour venue just to prove himself worthy of the anti-Christ of Comedy title. Ironically, this is exactly the sort of feedback Brader would relish.

Like a mean magician who, during the illusion, would deliberately spoil the wonderment by revealing how the trick works, Brader is a ‘this is how I could make this story funny for you but I’m not gonna’ style comedian. Dedicated entirely to antagonising the audience, the stage becomes a soapbox from which he preaches the 101 reasons why he won’t succumb to formulaic comedy.

Unfortunately, any success Brader has with his caricatures is undermined by his frequently unfunny textual ramblings and dogged elitist opinions on racial comedy. Brader views such material comedy as ‘low-brow’, accusing it of disempowering the comic’s own ‘Gook/ Wog’ heritage, and believes it lends power to the very terms intended as derogatory slander.

This is the reason Brader refuses to do Kiwi comedy. If I could have got in a heckle, it would have been; ‘Just sell out and do some (funny) bloody Kiwi humour Bro!’

Yet, in some absurd justification of moral high-ground, he feels this style of comedy is cheap. Yet despite this, Brader spends most of his routine paying out Australian stereotypes; Berwick Bogans, Frankston’s Single Mothers, and yobo comedians who alienate audiences by calling them ‘C**ts’ is (somehow) not derogatory or racist comedy in Brader’s opinion. If we’re going to get comedy politics precious then I dare say these topics verge on classist and sexist, but apparently, that’s okay.

The most annoying element of Brader’s routine – surprisingly not the part where he involuntarily cast the audience as ‘co-writers’ of his humour – was the virtual verbatim recital of other comedy routines. Brader reasons that re-telling another’s routine, followed by a deconstruction of how and why it was clichéd and formulaic, translates into clever humour.

At least Brader is true to his word here and proves he doesn’t indulge in self-deprecating humour. He just prefers to deprecate others. One would think a comedian’s job is hard enough without insiders turning on their own kind.

It’s possible that Brader will be back. He’s definitely got commercially viable looks. I’m just not so sure about the comedy and frankly, neither is he.

Eugenia is a Melbourne-based freelancer with a passion for the creative and the digital - particularly their future matrimony. She has a background in music, design and communications and is always looking for another string to add to her bow.