Comedy review: I’ve got 99 problems and here is an exhaustive list of them

A night of spiders and freewheeling-absurdist humour.
Helen Hopcroft 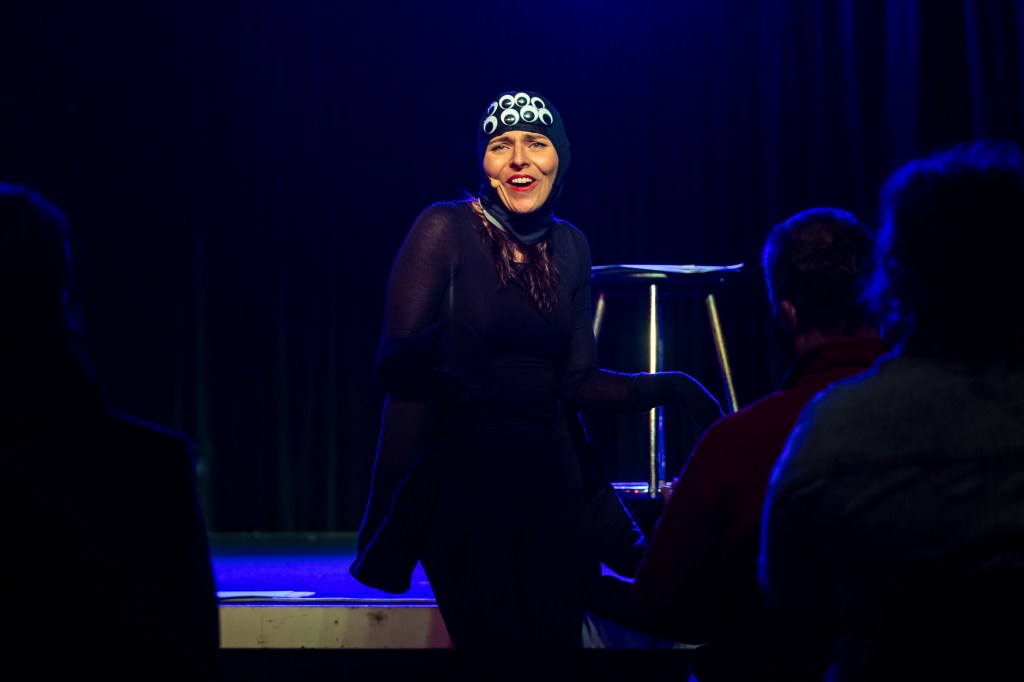 Many of the 99 problems relate to an episode Lavoipierre relates about being ‘followed by spiders’. Photo by Joseph Mayers.

A small club in Newcastle with a black ceiling and a room full of nervous, excited people. The club is new and the owners are staffing the door themselves, gently laying out the venue rules: no excessive heckling, don’t take your drinks outside. Because of COVID restrictions, the audience has waited for months to see this act.

The curtain parts and a peculiar creature shuffles into view. With her dual lives as a comedian and an ABC journalist, Ange Lavoipierre projects intelligence and comic verve like some kind of human sonar device. The costume she is wearing is hilariously handmade: a spider suit with legs made of stuffed black stockings, a black balaclava and eight googly spotlight eyes adhered to her forehead. When she removes the eyes, they come off with the sticky squelch of Velcro. It’s a visual gag that adds a nice absurdist punch to her show’s opening set.

This is the first iteration of Lavoipierre’s beautifully named new show, I’ve got 99 problems and here is an exhaustive list of them, and the first time it was performed in front of an audience. If it’s suffering from an identity crisis – a sense of being in transition, not yet fully formed – then this probably reflects the experience of most of the audience. These are strange times to be a performer or a person who enjoys live theatre. Lavoipierre works off her phone for chunks of the show, losing her way in the script and finding it again, yet somehow her bumbling intensity makes this ok.

Despite the expansive title, spiders are a recurrent theme of the show. Many of the 99 problems relate to an episode Lavoipierre relates about being ‘followed by spiders’. The spiders transition between different identities themselves: at times they function as harbingers of doom, harassers, poignant messengers, helpful avatars, wise counsellors. She interweaves a narrative about a difficult relationship with stories about her interactions with spiders during this time.

Lavoipierre’s friends and family – who appear as characters in her set – are sometimes defined in relation to their pro- or anti-spider stances. A disapproving friend farewells her after a dinner party with the devastating rejoinder that ‘every time you kill a spider, you kill a piece of your imagination’. In another part of the show, Lavoipierre hands out a short script based on the famous children’s book, Charlotte’s Web, and encourages audience members to play key characters. It’s not the only time the audience are recruited into active roles: early in her set, Lavoipierre gives an audience member a small bell (the kind you usually find on a shop counter) and encourages her to ring it every time she lists a new problem.

Lavoipierre demonstrates a knack for absurdist humour, free-wheeling comedic analysis, quick wit, theatricalised paranoia and the ability to carry an audience along the complex lines of her thought processes and storytelling. She creates magic at the intersection of a story about learning French from a language app, Duolingo, a personal narrative about a failed relationship, and amusing anecdotes about the role of spiders in her life. Yet the sheer breadth of the subject matter does sometimes create something that a panel beater would refer to as a ‘cut and shunt’, where the front of one car is welded to the back of another model. This is a brilliant show that is evolving between identities and working out its message as it goes along.

I’ve got 99 problems and here is an exhaustive list of them
Written and directed by Ange Lavoipierre
Producer: Uncapital Productions