A powerful re-mapping of the history of colonial and First Peoples interaction eclipses Reihana's career.
Suellen Symons
[This is archived content and may not display in the originally intended format.] 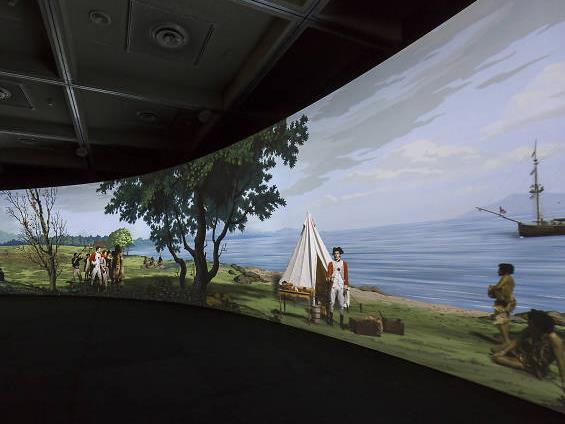 Picture this: Pods of performance float effortlessly by while we recline on a beanbag or wooden stool two and a half centuries later, looking “back in time” interpreting the display on a wide cyclorama.

We (the audience) are bearing witness to the events, strewn like microcosmic pods depicting interpretations (through actors) of the impact of colonisation on the First Peoples of Australia, New Zealand and Polynesia, in Lisa Reihana’s panoramic video work, In Pursuit of Venus [Infected], which is set against a background appropriating Les Sauvages de la Mer Pacifique (1804) by Joseph Dufour, a French Neoclassical, 20-panel scenic wallpaper.

In Pursuit of Venus [Inflected]

In Dufour’s day, there was wide spread fascination with the voyages in the Pacific undertaken by James Cook, Louis Antoine de Bougainville and Jean-Francoise de la Perouse, a kind of “exotica” captured as wall decoration.

The wallpaper, and consequently the video Reihana inserted into this idyllic setting, offer up a utopian Tahitian landscape. Reihana has included the encounters between Europeans and Polynesians that weren’t featured in the original design.  For the uninitiated, this work of Reihana’s represented New Zealand at the 57th Venice Biennale in 2017, and this is its first presentation in Australia.

It took almost ten years in the making, and years of research to learn how the costumes were made, and then a long time to make them for this artwork. She even hired the original Captain Cook uniforms in London, which she flew over here for a week then flew back again after making the video.

In her artist’s talk at the Campbelltown Arts Centre (CAC), she told Deputy Director of the Art Gallery of NSW Maud Page that she had invited quite famous and known New Zealand figures, including politicians and actors, into the video.

Reihana made each section as she could afford to, afterwards putting all the sequences into the background with the help of hired talent. She said she was like the director of a feature film with a crew of talented individuals working for her.

As a viewer, it comes across like a form of theatre with many stages shown at once, but in saying that, we just look at one at a time as they pass by horizontally on the cinema screen. It is a kind of micro macro reading – from the broad historic panorama to the intimate and individual stories of histories telling.

Reihana talks about a “tapestry” of life where as many scenes as possible of daily life are depicted.

For example, there is a scene where an adult Indigenous man gives birth to another grown man, seemingly in a game (not unlike Tracy Moffatt’s “Scarred for Life” where an Indigenous boy gives birth to a doll), and a woman seems to come over and scold or laugh with them at their ploy.

Luckily for us there is no real violence, but it is alluded to in the video – the next unfolding scene. The exception to this is the whipping of a convict in public.

Intrigued by the wallpaper scenario, I discovered that the Art Gallery of NSW and the National Gallery of Australia both have this wallpaper in their collections.

I read that, “In revolutionary year XIII (September 1804 – September 1805) the French entrepreneur Joseph Dufour produced a concept in wallpaper design that secured the new direction of decorative interiors.”

It was the largest panoramic wallpaper of its time, depicting a fantasy of coloured landscapes featuring the people, events and places encountered during the exploration of the Pacific. The introduction of this papier peint marked the burgeoning of an industry in panoramic wallpapers in France.

Dufour commissioned the publishing house of Moiroux in Franche Street, Mâcon to issue a prospectus advertising Les Sauvages de Ia Mer Pacifique: tableau pour decoration en papier peint. In this were expressed some of the ideals of the Enlightenment, such as human equality, overcoming ignorance through popular education, and scientific progress. These sentiments reflected the belief that progress could be achieved through knowledge of the natural world, which could be manipulated by technology to enhance the human sciences and ultimately produce tolerant and secular societies.

Only five complete examples are known to remain in situ, most privately owned.

Reihana went around New Zealand looking for stories, and when she found the main story it took a long time to get permission to use it from the Elders. The story she eventually got permission to tell was the death spell story, A Maori Dragon Story.

Although she had never been trained properly in animation, she teamed up with a couple of girls she met at film school in New Zealand to make it. She was also inspired by the animation work of Svankmeyer and Brothers Quay.

The watching of the screen, perhaps because of it’s idealistic nature, and the delightful pockets of enchanted scenes from a time when original cultures were unspoilt meeting with, and sharing knowledge with, the European explorers and settlers is mesmerizing.

It’s a utopian dream based on interpretations from studying the stories of Joseph Banks, Captain Cook and the Maori Elders, as well as others. It is so spell-binding that one does not wish to stop looking, and only after an hour did I drag myself away to look at the still photographs.

In Pursuit of Venus Dramatis Personae (pictured above), are photographic prints on Lambda paper (1260 x 900mm) of her subjects from the main video, which are posed rather traditional – either as a single subject or paired and looking directly at the viewer, or their eye cast to the distance.

For me, these weren’t so successful. I found the presentation slightly disappointing after the video – a little too “flighty and flimsy” in the way they were hung on the walls. I was also perplexed why there needed to be a female James Cook, as well as a male one, among these portraits. I know there was a strong feminist presence in the work – perhaps it was trying to make a statement about equality in these #metoo times – although this series was made earlier.

There was a definitely a perception and presentation of strength in the female warriors, which felt authentic. Perhaps this suite of photographs over-analysed an idea that was intrinsically fleeting, like time, and more akin to the exoticness of the original, before contact with the Europeans diminished their lores and customs.

These ideas were so well captured in Reihana’s moving screen work, but became diluted and more contrived with pulled out and framed within museology traditions of the ethnographic portrait.

Another highlight to the survey of works that surrounded the presentation of Reihana’s Venice Biennale work, was the installation Colour of Sin: Headcase Version (2005). Encountered as one of the first works in the show, it was a fun interactive idea using hairdryers and a sound work – conversations revealing secrets.

Another key work in the exhibition was PELT (2009) – set off to a side in a separate gallery. There are four portraits in this series, including two strange photographic portraits depicting pale Caucasian-looking women as Centaur-ostriches, that are paired with white ghost-like trees. They illustrated an aspect of Hinenuitepo, a very powerful female figure in Maori creation stories.

Reihana said of this work: ‘When recalling our near death experiences, people often talk about moving towards the light. I’m interested in the contrast between light and dark. To me this movement literally suggests birth of new life.’

There were another two galleries with significant works – a selection of early video work from 1988 to 2002, which highlight Reihana’s interest in the use of costumes and creation of characters, and in another darkened gallery, Tai Whetuki – House of Death Redux (2015-16) – a two channel video about the ritual of mourning.

I began to feel cluttered by too much information.

Of note this is the first Australian survey exhibition of the celebrated New Zealand artists, and presents three decades of her video and photographic works.

I highly recommend a trip to Campbelltown to see Reihana’s Cinemania’s In Pursuit of Venus [Infected], the vast single channel video that reframes history in 64-minutes. I give the video five stars, and salute its “re-examination of colonial history through the re presentation of micro-histories and counter-memories expressed formally in experimental ways, drawing inspiration from the vibrant cultural communities of the present.”

However, the rest of the survey exhibition does not come up to the same 5-star rating. I give 3 ½ stars, and although it is interesting to see and listen to, it comes across with a flotsam jetsam that sits counter to the main video.

This exhibition is presented as part of Sydney Festival

Suellen Symons is a Redfern (Sydney) based artist and photographer. Exhibiting since the 1980s, her work is held in public and private collections.