Carmen gets new life with a decent dose of colour straight from the streets of Cuba, joining the new chic of all things Havana bound.
Gina Fairley 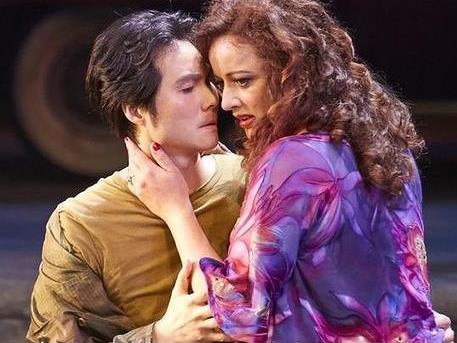 It is rather fitting that John Bell’s new production of Bizet’s Carmen is set in Cuba, in this year that embargoes have been lifted and cruise-liners are lining up at Havana’s port.

Simply, Cuba is the new Spain, and while the production’s architectural references and colour are more in sync with a retro-chic image of the city than its contemporary reality, a little poetic license in the realm of opera is forgivable – or as Bell states in his production notes: ‘we’re making an opera, not a travel documentary.’

Expectations were high for Bell’s direction following the success of his 2013 production of Tosca, and with a crowd-pleaser like Carmen opening Opera Australia’s 2016 Winter Season there was little room for disappointment.

While is was the costumes that really punched life into this opera, building the characters superbly, at moments that collision of old and new felt confused. One example of that slippage was the gang of street lads in contemporary street dress jarring with the retro tone of the cigarette factory girls and gangster choruses – hip hop meets salsa.

That tug of old and new was more successfully captured in the opening of Act I, with the arrival of Micaëla (Natalie Aroyan) on stage with “wheely-bag” in tow. Such subtleties in Bell’s direction were gems scattered across the production.

Aroyan immediately captures the strength of duty and innocence of Micaëla; her wholesome devotion to Don José was matched in tone with her gentle vocal delivery.

The firery lusty Carmen that we know and expect to be delivered was a little slow in coming from Clémentine Margaine. She got the impulsive snarly side right from the start but forgot to take her passion pills, coming across a little stiff and excessively staged.

Margaine delivered vocally but was unable to match that with sizzle. Her first act aria ‘Love is a wild bird that no one can tame’, felt more caged than wild in its delivery.

The vibrancy of Jane Ede and Margaret Trubiano as Carmen’s gypsy friends Frasquita and Mercedes magnified the point. Dramatically and vocally on point, they added a strong sense of moment, narrative and lightness to the production.

Margaine did warm up in the second act, and Kelley Abbey’s choreography helped flesh out those desires, intrigues and sensuality.

Opera Australia audiences have now seen him as Cavardossi in Tosca and Calaf in Turandot, and he continues to thrill.

Audiences witnessed Lee’s innocence and indifference to Carmen in Act I slowly build to its final eruption in the last act, where the rapport between Lee and Margaine was superbly on point.

The crowd scenes were beautifully produced by Abbey and Bell, and built the kind of ‘blockbuster’ energy we expect of Bizet’s Carmen. At moments, it was Abbey’s choreography that was that glue that held this production together.

Scott-Mitchell’s static village square surprisingly allowed for great flexibility, making for a visually textured production. He built upon an austere disheveled street setting with pop-up additions – at moments a kombi van and truck entered onstage – and then stripped them back accordingly.

The parallel worlds of smugglers, celebrity and military were fleshed out across this set through robust performances by Michael Honeyman as the bullfighter Escamillo and Adrian Tamburini as the sleazy lieutenant Zuniga.

Despite his splashy and well-staged appearance, Honeyman still had room to pull more out of Escamillo vocally, while Tamburini could be described as the reverse.

Visually Bell’s Carmen is lively and a pleaser. It hits the “must see” button that we expect of this opera classic. But there are moments, however, that leave one felling a little unstitched, not fully satiated. Sure, we get our dramatic end and the curtain closes. I’m not disappointed per se, in fact it was an impressive production overall and it has lingered with me this past week.

During the two and half hours we are served up forbidden love, deceit, betrayal, jilted lovers and impassioned death. What more could one want? And yet, something feels amiss.

Reflecting back on this production, it is not Carmen but rather Don José who is the real star. It feels inappropriately billed.

Bell’s search for new ground was a risk, and the “Cuban thing” was a bit of a fail-safe that worked. But that spirit of risk-taking and driving an operatic canon into new ground requires more than delivering an aria well. This perhaps is where that ‘meh’ moment lies – did Carmen dig deep enough?