Bringing together 22 strong, resilient and determined female voices from around the world, Truth Bomb is a homage to the women artists that have ‘guided and inspired’ the author.
Mem Capp 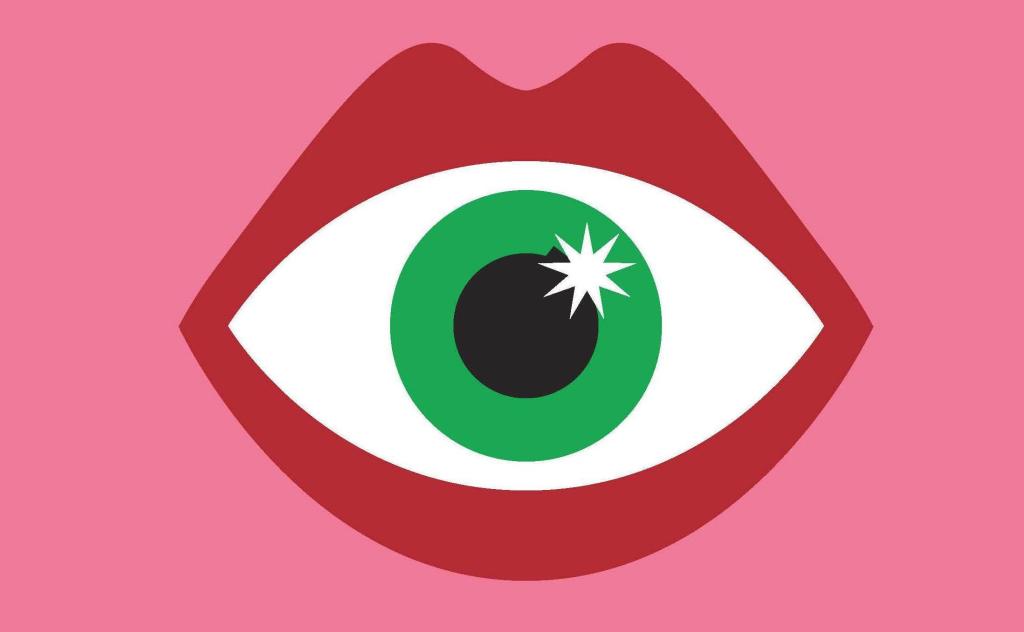 Image via Thames and Hudson.

The cover is a hot pink with a large eye at its centre. Encased in glittering red lips, it stares from the picture plane, challenging the viewer to react. They say ‘don’t judge the book by its cover’, but maybe in this case you should; the cover of Truth Bomb: Inspiration from the Mouths and Minds of Women Artists confronts, wrestles, and plays with accepted feminine paradigms in art, and captures something of the dissonant voices within. This is a book that won’t sit quietly on your coffee table.

Bringing together 22 strong, resilient and determined female voices from around the world, Truth Bomb is a homage to the female artists that have ‘guided and inspired’ the author. Loosely grouped under six subheadings, the artists explore themes such as love, power, racism and sexism through the vehicles of humour, popular culture and mental health struggles.

Crompton invites readers to learn about these artists through not only their visual work, but aspects of their personal lives as well; small details like habits, obsessions and outlooks on life are included that provide a context and depth to their art.

One example is US artist Judy Chicago’s controversial The Dinner Party, (1974 – 79) a ceremonial table for 39 historical female figures represented by beautifully abstracted vaginas at each setting. Crompton discusses the work’s controversial reception, and the 87 minute speech in the US House of Representatives over whether the work was art or pornography which saw The Dinner Party banished to storage for nearly three decades. The full installation is not included in the book, but details from the piece such as Primordial Goddess plate (The Dinner Party) 1979, a porcelain celebration of the feminine in soft pinks, purples, blue and green, give a sense of the larger work.

The Guerrilla Girls, a collective of feminist artists formed in 1985 New York, became known for wearing gorilla masks as a form of protest. Arguing that the masks gave them ‘mask-ulinity,’ their aim was to protest and highlight the lack of female representation in major galleries such as the Museum of Modern Art (MoMA) and the inequities and bias in the art world towards female artists. Launching a disruptive poster campaign that used provocative graphics and text with humour and intelligence the group continues to leave its mark, their geographic region now extending to the rest of the US and Europe.

Do Women Have to Be Naked to Get into the Met. Museum? 1989, a screen print on paper, aptly captures the Guerrilla Girls’ style with the image of a traditionally reclining nude on which a gorilla head has been transposed along with accompanying statistics of female representation in the Modern Art section of the Met.

UK artist Miriam Elia explores and highlights bias and discrimination in the contemporary art world through performance, radio, film and works on paper. In her 2015 book We Go to the Gallery, she pokes fun at some of the clichés of the modern art world through a spoof of the 1960s Penguin and 1970s Ladybird educational books for children. In this rewriting, the reader learns words such as ‘vagina’, ‘feminist’, and ‘capitalist’ as they contemplate such lofty notions as aesthetics and patriarchy.

Crompton provides a number of examples of the series in her book, such as a lithograph on paper of a young girl sitting in a gallery staring at a white wall. ‘The canvas is blank. Susan is blank’, reads the text. The new words to learn at the bottom of the page are ‘blank, canvas, blank’, referencing Russian Constructive artist Kazimir Malevich’s oil painting on canvas White on White.

The book also includes work from Australian artists, including Pitjantjatjara artist Kaylene Whiskey. Whiskey depicts powerful popular culture icons like Dolly Parton, Tina Turner and Super Woman in her cartoon-like paintings. Using synthetic polymer paint on linen, Whiskey celebrates traditional stories such as the Seven Sisters by substituting each sister for one of her icons, combining them with traditional symbols and mark-making in a joyous celebration of female strength and womanhood.

The highest selling living female artist, Yayoi Kusama from Japan, won attention in the male-dominated world of 1950s and 1960s New York to gain worldwide fame. Also a prolific writer, winning awards for her novels and poetry, Crompton explores Kusama’s artmaking and writing through the lens of her mental illness. One of her paintings included in the book, Late-Night Chat is Filled with Dreams (2009, acrylic on canvas) presents a surreal, dream-like landscape of black markings on a blue background. Repeated faces emerge and then disappear as tentacle-like shapes dance from the sides of the canvas and strange sea creature forms float in and out of the picture plane.

This book is a celebration of the power of the feminine and the need to continue the fight for more equal female representation so that the world does not continue to view art through the dominance of the male gaze.

Truth Bomb: Inspiration from the Mouths and Minds of Women Artists