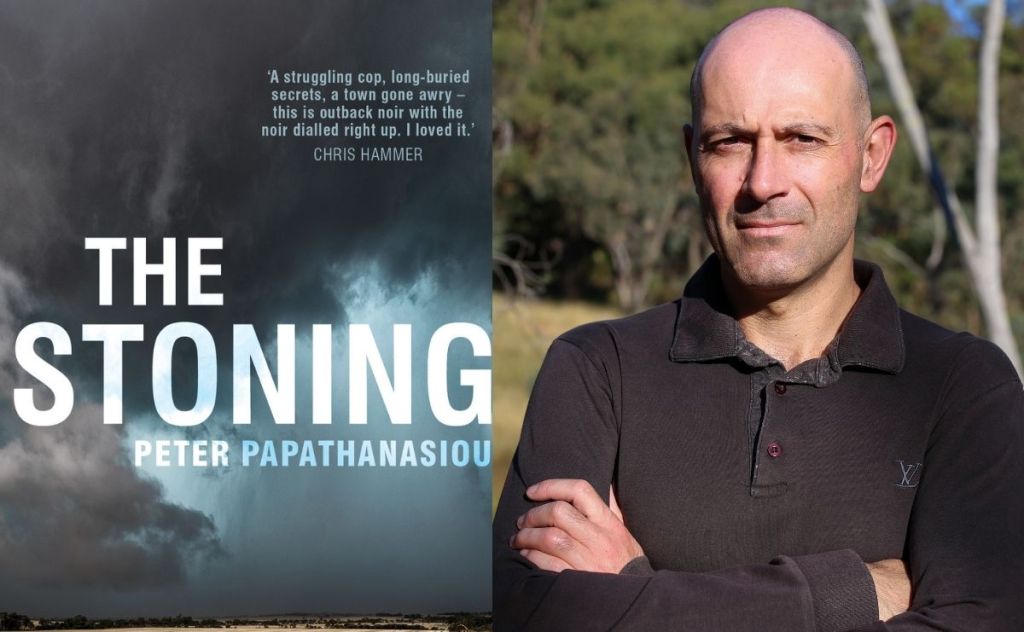 ‘Anyone looking for their next page-turner – particularly one that reflects the issues facing contemporary Australia in all their complexity – will find what they’re looking for here.’ Photo supplied.

We first meet Detective Sergeant George Manolis, the protagonist of The Stoning, when a dawn phone call despatches him to Cobb, his childhood hometown, to investigate a brutal murder. Molly Abbott – young widow, local schoolteacher, all-Australian girl – has been found taped to a tree and stoned to death. Local suspicion has fallen on the refugees at the newly established detention centre on Cobb’s outskirts, but as Manolis begins his investigation into Molly’s death – while also coming to terms with the grim decline Cobb has undergone since he left – it soon becomes clear that everyone in town is a suspect.

So goes the opening of Peter Papathanasiou’s debut novel, a recent entry in the Outback Noir genre that most people associate with The Dry, the Jane Harper novel that spawned an Eric Bana-helmed film adaptation earlier this year.

Surface comparisons between the two are justified: as a big-city detective returning to his hometown to confront the past, Manolis is not dissimilar to The Dry’s Aaron Falk (and could just as easily be played by Bana.) The most noticeable difference, however, lies in the supporting cast of police officers, refugees, detention centre workers, and townsfolk spanning races, genders, and nationalities. The diverse line-up brings Manolis’ investigation into contact with some of the darkest undercurrents in contemporary Australian society: violence against women, racial tensions between white and Aboriginal Australians, the brutality of Australia’s immigration detention system, and the wide range of crises – drugs, alcohol, poverty, ecological disaster – devastating many outback communities. It’s a lot to work with, and on the whole Papathanasiou exerts an admirable amount of control over his subject matter, drawing what he needs from the different threads to answer the central, burning question: who killed Molly Abbott?

Read: Book review: How to end a story, Helen Garner

Almost all crime novels hinge on their ability to answer questions like this one in ways that surprise while also making you wonder how you didn’t see it coming, and on that front, The Stoning delivers. That said, the novel’s secondary aspirations toward social commentary sometimes get in the way, manifesting in dialogue that drifts away from believable human speech.

‘You’ve got invasion and genocide coursing through your veins, young Sparrow, and rightly so’, Manolis pompously informs the local Indigenous constable at one point, a choice of words that, for all sorts of reasons, could probably have done with more editing. Manolis is hardly the only character with this tendency to sermonise; at one point the detention centre director embarks on a long, unrealistic monologue that somehow invokes Babylon and Ancient Egypt. (That he stares out his office window with his hands on his hips while he speechifies only completes the moment’s B-movie villainy.)

There are also occasional fumbles with the plot. Among other oversights, Papathanasiou attempts to play the ‘revelation’ that Cobb is Manolis’ hometown as a chapter-ending reveal 34 pages in, something you can’t really pull off when said information is already plastered across the blurb.

All in all, though, The Stoning is a solid whodunnit that uses the crime genre to render the social and political faultlines of an outback community in vivid, intricate detail. Anyone looking for their next page-turner – particularly one that reflects the issues facing contemporary Australia in all their complexity – will find what they’re looking for here.

Michael Hannan has written and edited for artsHub, Express Media, and TEXT. He is currently a PhD candidate in literary studies at the University of Wollongong.