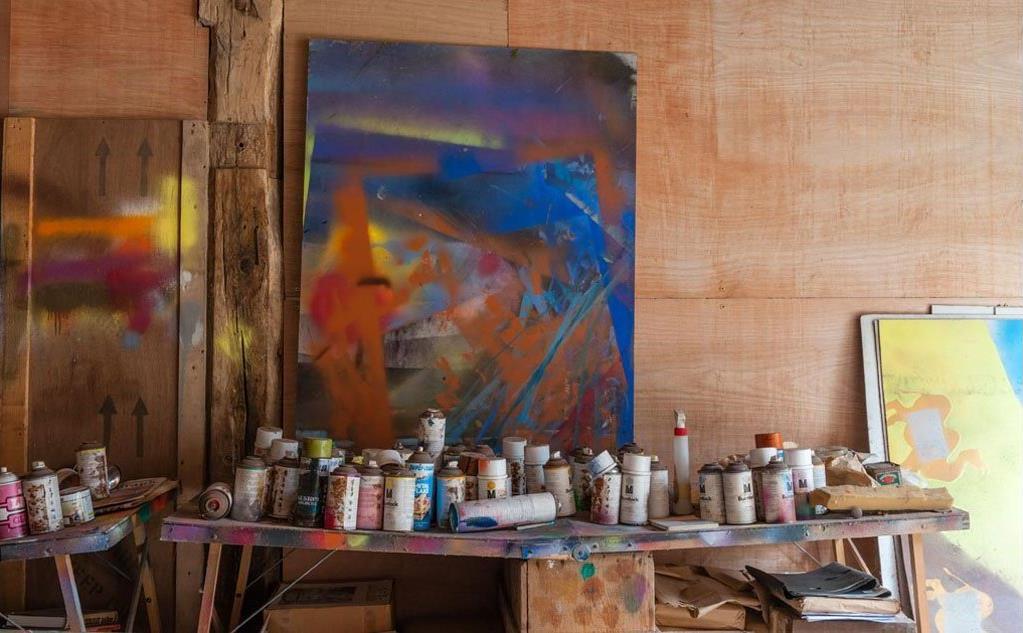 The latest book in the Getty Conservation Institute’s publications, Sidney Nolan: The Artist’s Materials by Paula Dredge, takes a forensic approach to understanding the art of this great Australian Modernist painter. To shed light on Nolan’s innovative use of commercial paints and development of commercial paint technology in Australia, Dredge utilises a range of primary sources such as letters, historical accounts and photographs along with scientific analysis of his paintings and the materials left in his two studios in Wahroonga, NSW and The Rodd, Wales. Reflections on Nolan’s use of other non-traditional materials such as cardboard and Masonite, additives and dryers, wax crayon and spray paint and how they may have influenced his art and its longevity are also included.

Apprenticed as a sign painter from the age of 14, Nolan gained his initial training and experience in the commercial paint industry. Inspired however by the travelling Herald exhibition of French and British contemporary art in 1939 and his own voracious reading and research, Nolan decided to become an artist, later gaining the patronage and support of John and Sunday Reed and The Heide Circle. Interspersed throughout the book are aspects of Nolan’s personal life, including marriages, children, lovers and betrayal giving greater depth and dimension to the man and his art.

Nolan’s relationship with Sunday Reed was an important catalyst to his early success as was his later marriage to Cynthia Reed, while wartime service and the acute shortage of materials was to determine Nolan’s choices of medium, influencing his intensely emotional and poetic style of artmaking.

Dredge’s conversational writing style is supported by a range of visuals, from examples of the artist’s works to photographs of his personal life and those relating to his art practice. Graphs supporting scientific data and colour-coded technical sections make this multi-layered book both visually interesting and easy to navigate.

The technical lens through which Nolan’s work is explored is fascinating, and the colour-coded sections make it easy to skip the depth of scientific information that may not be of interest to the general reader.

Beginning his artistic life with little regard for longevity, Nolan exploited materials such as dyes, boot polish, Masonite, tissue paper and old photographs along with commercial and household paints. Analysis of some of Nolan’s paintings confirm his preference for the oil-based Ripolin paint; however, he did utilise other commercial paint types as well as synthetic alkyd and nitrocellulose paints.

When studying Nolan’s painting, it is interesting to contemplate how the limited range of prepared manufacturers’ colours in Australia prior to 1950s may have affected his colour choices even though he had a preference for primary colours which he would apply and mix directly onto the canvas. Nolan’s preference for the imported Ripolin over Dulux, because of its greater range of intense colours, later presented its own challenges. The thin, runny quality of the paint meant that Nolan had to adjust his style of working by painting on a flat surface like a table-top or floor. The 1943 painting Portrait, in which black paint drips into the forehead of the figure is an example of Nolan grappling with these issues. Dredge points out that another interesting feature of this painting is the resistance, separation and pooling of the black paint where it was applied over the lighter paint of the face to suggest shadows – the result of faster surface drying of the enamel paints.

Analysis, using synchrotron sourced x-ray fluorescent, of Nolan’s famous Ned Kelly series which was painted after he deserted the army in 1944 to avoid going to the battlefront, illuminates some intriguing details. In one of the paintings analysed, a hidden head is revealed under one of Nolan’s stylised black squares with horizontal slit, representing Kelly’s armour. Rotated and repainted, the strange placement of the slot opening for the eyes which is more to the bottom of the mask is indicative of the earlier painting underneath and Nolan’s use of artistic licence. This source of analysing work has also identified numerous reworkings of paintings due to limited supplies of support materials such as Masonite at the time.

Further analysis of the Kelly series also provides some understanding of why the 26 paintings given to the National Gallery of Australia (NGA) in 1977 show marked deterioration in comparison to the one bought by the Art Gallery of New South Wales. Cleaned and varnished by Fred Williams (as noted in a 1963 catalogue at the Velasquez Gallery exhibition), the varnish on the NGA paintings has now darkened and yellowed; paint defects such as blistering and crazing in some of the black paint areas is also visible. This is thought, in part, to be due to heat or light damage perhaps as a result of extensive touring and display of the works between the 1940s to 1960s.

Dredge concludes, despite the dire warnings of Ralph Mayer in his Artist’s Handbook of Materials and Techniques (reissued 1970), of the inappropriateness of commercial industrial paints being utilised as artist materials, that most of Nolan’s paintings analysed to date, after 70 years, still appear to be in excellent condition.

With contributions by conservators Anne Carter and Gillian Osmond from the Queensland Art Gallery and Gallery of Modern Art (QAGOMA), Dredge, who is Head of Paintings Conservation at the Art Gallery of NSW, provides bold new insights and ways of seeing the works of this iconic Australian artist. Three separate appendices at the back of the book cover Nolan’s paintings and the materials found in his studios as well as samples of his works; a notes and reference section is also included, making this finely researched book a valuable academic reference or accessible general reading source.