With film-to-musical adaptations the flavour of the day, the Hayes Theatre Co has provided another example of how it can be done.
Glen Falkenstein
[This is archived content and may not display in the originally intended format.] 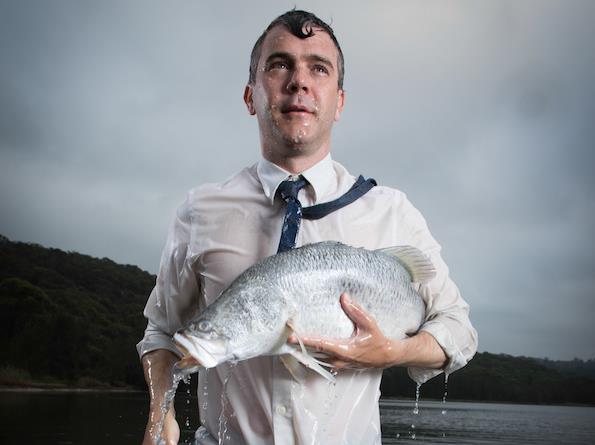 You might not have seen Big Fish, or if you did remember it all that well, or it might be, quite fairly, one of your favourite films. Tim Burton’s 2003 fantasy about Edward Bloom, a travelling salesman in his twilight reliving his most fantastical adventures while his son tries to piece together just how much of it is true, is not only a classic for Burton fans but a much-loved familial tale by many more.

Here focusing more in depth on Bloom’s family members and a select few of the phenomenally inventive escapades, Bloom, depicted in the film by Ewan McGregor and Albert Finney, is brought to life on stage by one actor alone, and it’s not hard to see why.

Phillip Lowe, jumping between Bloom’s elder and younger states and the vastly differing stages of his life, is as endearing when playing the undeniably charming younger traveller, whipping on a baseball cap, ineffably loveable grin in tow, as he is performing the older counterpart. Not the only performer to play roles over a span of years, the depth of the stage, with characters slowly moving toward the audience and in the intimate space of the theatre effectively growing as the years pass, is deployed to amazing effect. Not least of all, Karl The Giant (Seth Drury) towers over proceedings with some of the play’s best slapstick and most memorable one-liners.

Lowe, as good as he is, was notably unable to perform the singing parts for his initial outing as Bloom due to a brief throat infection, with the Director Tyran Parke, a very talented performer in his own right, filling in the musical stretches to the side of the stage. Never intruding on the action and with the effect rendered seamless after a few numbers, the separate round of applause not solicited but proffered for Parke at the end of the play, instead letting the cast appear for the standing ovation, was well deserved.

With the opening numbers of each Act among several stand-outs of a very enjoyable production, a few of the early ensemble numbers, while irrevocably rowdy given their nature and setting, were nevertheless at times too frenetic, with the choreography occasionally waning for some of the most upbeat or rambunctious moments within the small theatre. A number surrounding Bloom’s venture into the circus, replete with ringmaster and a few excellent physical performers, was comparatively elegant and supremely well staged; only one of the sequences where Jenny Hill served as a highlight of the show alongside Lowe, too playing multiple roles.

As heart-warming as the film though very different from how you remember it, Big Fish is another exceptional production from Hayes that will no doubt excite both fans of the original and the uninitiated.