MELBOURNE INTERNATIONAL COMEDY FESTIVAL: Ben Cousins the 'bad boy' (among a few I'm sure) of Australian Rules was a logical choice of the next public figure to lampoon. And lampooned he was or rather harpooned as it isn't a very flattering picture painted of the young footballer's exploits.
Matthew Bolden 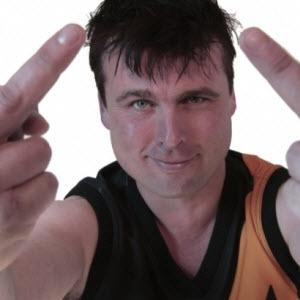 The irony was not lost on me that I happened to see Ben Cousins: A Rock Opera on the night of St Patrick ‘s day. Walking to the venue in Carlton I passed several groups of inebriated well wishers who were celebrating at length an age old tradition of getting smashed. And here was I on the way to see a play about a man famous for among other things getting off his nut.

For those rare few that are not familiar with the recent trend in musical homages to questionable characters. They fall into two major categories, Politics and Sports. Shane Warne’s has been the most popular of the sports offerings. So Ben Cousins the ‘bad boy’ (among a few I’m sure) of Australian Rules was a logical choice of the next public figure to lampoon. And lampooned he was or rather harpooned as it isn’t a very flattering picture painted of the young footballer’s exploits. Expertly done though, with a cast of four and without the resources of their predecessors.

The music of course the driving force with many well known tunes re-concocted with imaginative finesse and definitely like most of the comedy pulled no punches.

The show was born on SEN radio in 2008 the brainchild of writer/director and songster Keiren Butler. The ‘warm up’ section, an entree to the main course told the story of the general professional reaction to his show, which as you can imagine was not favourable. Keiren ridicules the stuffed shirts brilliantly. His performance throughout is excellent, with such a accessible and engaging manner and seamlessly skilled at his craft. Keiren plays several of the characters, including a hysterical portrayal of Damir Docic. Through his other two characters, Demetriou and McGuire weaves the story into a rollercoaster of conflicting unstable personalities.

The rest of the small cast is great too, with Matt Walsh doing a fine job playing a physically demanding role, demonstrating among other aspects Cousin’s drug fuelled insanity with disturbing authenticity. His reveal of his tattoo is artful with a special guest character, who brings an almost Freudian edge to the ensuing comedy.

Michelle Wilson is also fantastic as the female characters, the highlight being for me the portrayal of Caroline Wilson parodied as being vitriolic and downright bitter. Her role as the orchestra adds vivid life to the show with flawless violin playing.

Last but not least we have Sean Burke, who with a black and white face plays a barking mad of Mick Malthouse which is very funny. His facial expressions fascinated me with their perpetual variety.

The only thing I found hard were the football references especially of prominent figures; which was my fault more than anything for having what I think is a pretty healthy ignorance of the football world. This divided which members of the audience got certain jokes. This lack was minimal as Ben’s journey in and out of infamy and debauchery was well explained and represented generally speaking.

The best part of the whole rock opera was the acerbic social commentary on how we as Australians largely worship quite morally ambiguous public figures. It’s as if providing great entertainment on the field is more than enough justification to alloy major indiscretions to be overlooked in the name of Aussie macho ‘values’. The writing brutally exposed and ridiculed this odd collusion, which I thoroughly approved of.

Devised and Directed by Kieran Butler

Matthew Bolden is a reviewer for ArtsHub.