A take-no-prisoners ghost-train ride into horrors within.
David Barmby
[This is archived content and may not display in the originally intended format.] 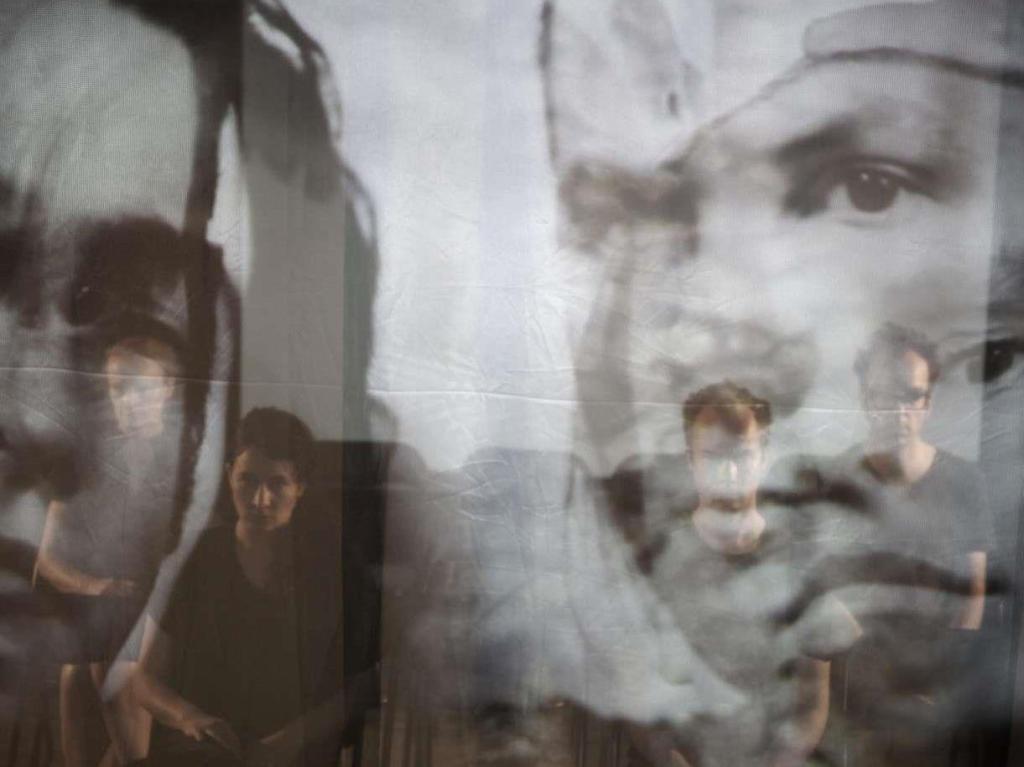 ‘A cadaver wrapped in black plastic twitches in the corner like a snake with its head cut off.  Ticking erratically, this animated corpse offers a counterpoint to the digital clocks at opposite ends of the space.  Facing each other, these clocks mark time passed and time to come.’

Stretching the boundaries of what might be considered opera (there is little singing, theatre or text) Another Other (part experimental opera, expanded cinema, sound art and installation) is a multi-media tour de force rhetorically based on the black and white film, Persona (1966) directed by Ingmar Bergman.

In Bergman’s essay The Snakeskin he describes Art as equivalent to a snakeskin full of ants ‘the snake itself is long since dead, eaten out from within, deprived of its poison: but the skin moves, filled with busy life’. On our way into the theatre we pass the cadaver wrapped in garbage bags and discarded into a corner, with the ‘pluck-plock’ sound of erratically ticking clocks engulfing us. Was this the discarded remains of Western Art we were passing?  It foreshadows what is to come in this exceptional creative achievement by Chamber Made Opera, a take-no-prisoners ghost-train ride into horrors within.

The 79-minute Another Other (though it was 90 minutes on opening night) questions the relevance of art forms, ‘authenticity’, our identities and genders. In the vast Meat Market space, the work uses fours screens and 12 microphones with centrally located performers facing each other behind computers and other technology, screened by two ceiling-to-floor gauze screens onto which images are projected. Beyond the centre, the audience sits in two banks of raked seating facing one other.  Further screens are to the side and behind each half of the audience.

The program note dscribes the work as “deeply collaborative” with “everything discussed in depth, each scene and our understanding of it”.  There is no composer, librettist nor director; rather four voices around a table interacting with one another in a controlled chaos.

So how did it go? Firstly, the lay-out of the project worked very well. To sit looking through two transparent screens of projected image to a further screen and the audience beyond, and to hear multifarious sonic contributions from the artists before us provided a wonderfully rich tapestry of abstraction to behold. Anderson’s improvisations using digitally processed garklein recorders, Veltheim violin contributions (including an excerpt of Bach’s Chaconne from Partita No 2 in startling counterpoint with screened soap opera) and Masselli’s 16mm film contributions were all highly engaging, but it was Pateras’s exquisitely refined and precise sound world of texture and sonority, using a synthesiser and reel-to-reel tape recorder manipulating his own sounds, pre-recorded sounds and those of others, which proved to be the most rewarding aspect of the work.  Overall, sitting through 90 minutes of episodic abstract soundscape and film without apparent structure or narrative was not a simple task; I felt that the work might be tightened and it was my instinctive need to have a clearer understanding of form, that I know the work was avoiding, which proved frustrating. In sum: a first-rate undertaking and a highly successful model for future collaboration.

Presented by Chamber Made Opera

Another Other was commissioned by Chamber Made Opera with support from the Australia Council for the Arts, Creative Victoria, Sue Kirkham and Charles Davidson.