All The Sex I’ve Ever Had

A collective 360 plus years of sexual experience sheds lights on the highs and lows of being human.
Kyle Walmsley
[This is archived content and may not display in the originally intended format.] 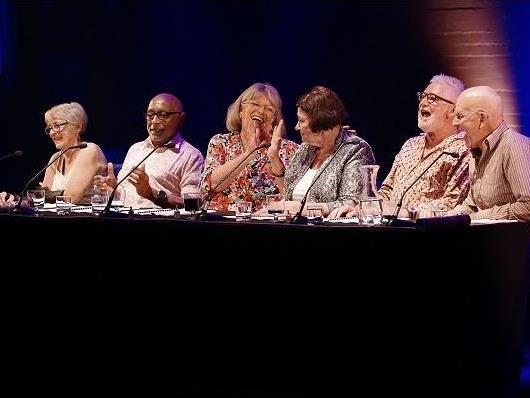 Mammalian Diving Reflex do interesting things. If you’re not already familiar with their works such as Haircuts by Children‘, These are the People in your Neighbourhood and Children’s Choice Awards you can view them at mammalian.ca. All this company’s works, including All The Sex I’ve Ever Had, are hearty, person centered projects backed up by a rigorous and intensely poetic philosophy.

This is the chicken soup of shows to see at the moment – a cure to restore your faith in humanity, and a great antidote to reading too many comments threads on the internet.

The cast is made of six 60-something members of the Sydney community, who have chosen to be a part of this process: Jennie, Judith, Liz, Paul, Peter, and Ronaldo. The cast take the stage seated behind a long desk, front and centre. The Drama Theatre stage is clutter free. Sound Designer and MC for the evening, Steve Toulmin occupies a desk just off to the side and will step us through decade by decade from birth and beyond as each person on stage shares their story. Helping relieve some of the incredibly intense moments of the night are intermittent dance breaks to the soundtrack of the era we’re up to.

We, the audience, are asked to stand and take a pledge of secrecy to not divulge any of the stories from the evening. The stories of the cast are their own and taken from moments of sexual awakening, identity-shaping, and self-definition. While sex happens to be the topic that ties the stories together, this is less of a Cosmo sealed section and more of a front page, headline worthy celebration. The stories are all simply shared, read from script, and without frills. They’re performed with frank clarity, spoken from the result of a lifetime wisdom gained. A collective three hundred and sixty plus years of wisdom.They are delivered with an unapologetic, gentle, and unblinking vulnerability which is why the effect on the audience is so profound.

Throughout the night, the creative team behind the project act as facilitators giving passage for us to join in this experience. At key moments throughout the piece, a cast member will open up their struggle to the audience and ask ‘I’m wondering is there anyone else here who…’ as an invitation to share. And because of the warm and comfortable construct of the evening, probably mixed with the nostalgia of childhood sleepovers past, the audience comfortably divulge layers of secrecy around their own pasts and presents.

Even without microphone or raising of hands, we feel very functional as part of the experience – the moments of spontaneous cheers, gasps, laughter and murmurs of self-recognition accompanying some of the most brutal and resilient points within the stories from the cast.

It’s just joyous. I don’t know what else to say without breaking my pledge. It’s also painful. But beautiful painful. Life in all it’s brutal, tragic, uplifting and wonderful glory packed into two hours.