A Rabbit for Kim Jong-Il

A screwball, morbid farce relying on a patently absurd premise largely based on an inexplicably true story.
Glen Falkenstein
[This is archived content and may not display in the originally intended format.] 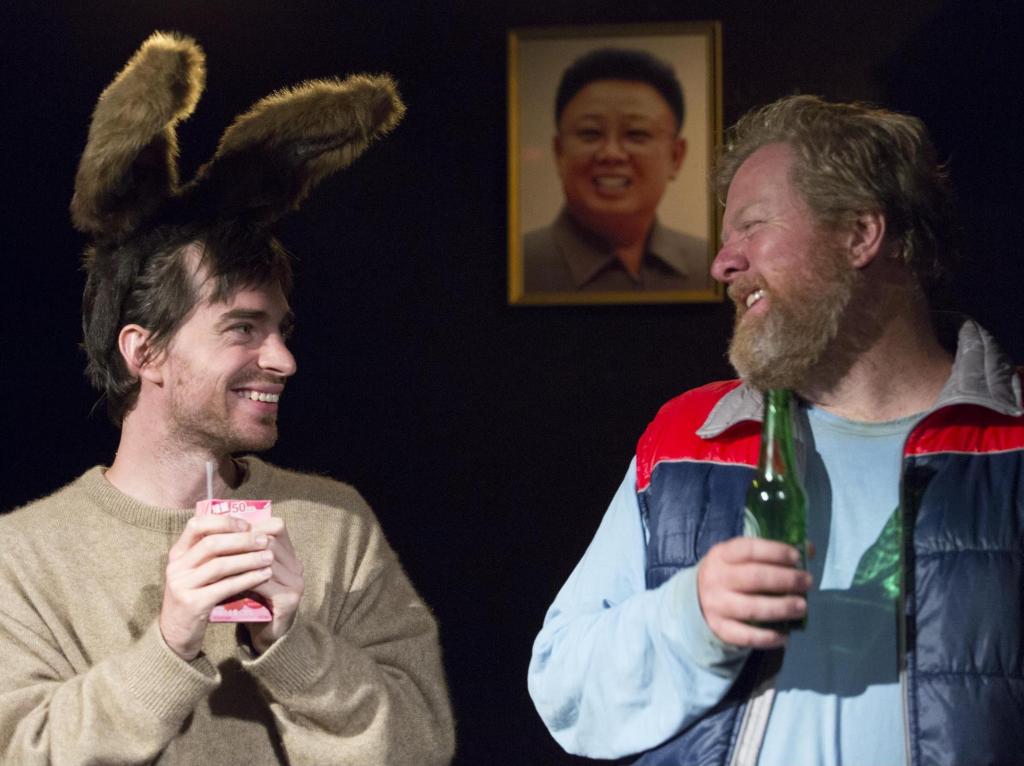 A study in dichotomy, A Rabbit for Kim Jong-Il is both a comedy and espionage thriller; a screwball, morbid farce relying on a patently absurd premise largely based on an inexplicably true story.

German rabbit farmer Johan (Steve Rodgers) is approached by the thoroughly charming representative of the Democratic People’s Republic of Korea and Dear Leader Kim Jong-Il (Kaeng Chan) to purchase his prize selection of large rabbits, among them the very talkative and life-like Felix (Kit Brookman, who also wrote the play). Meme Thorne joins in as a senior North Korean agent with Kate Box as Johan’s confidant; their motives unclear as the action gradually unfolds.

This play is in many senses comparable to Peter Seller’s 1967 version of Casino Royale, with the characters leaving Western civilization behind to travel to a wholly unfamiliar, comically disquieting, exasperating foreign world. As the action moves to North Korea the tone and style of the play dramatically changes, several times throughout, from awkward comedy to political satire to a very dark, bitter form of humour.

The earliest act in the play involving Johan and Chan’s North Korean agent, as well as almost any scene involving Chan, are highlights of the play. His performance as the sickly polite, immaculately groomed wheeler-dealer naturally lent itself to comedy and suspense, though the script did not allow for him to shine as well as he did in the opening scene, nor permit him any sustained comedic sequence which imbued the beginning of the play with such potential.

Brookman as Felix the rabbit is spot on in his portrayal and mannerisms; turning a potential one-laugh gag into a sustained source of humour throughout the play’s 100 minute run time. Much of the action takes placed on the raised platform that is the stage, though parts of the play do occur up against the far walls of the theatre, rendering some of the goings-on difficult to see for those too far away from the centre. Staged on a rough 90 degree plane facing the audience, parts of the action make it less easy for the actors to move around or engage with the audience as a whole, and as staged some parts of the crowd are cut off from elements of the play where a character is unnecessarily immobile.

With Chan and Brookman delivering solid performances, the potential for them to display more of their well-honed brand of comedy wanes as the play careens into darker territory with an ardent political edge, the change in tone emblematic of the rabbit-hole style journey that is the character’s adventure yet still confusing and discomforting as the play shifts styles very quickly and frequently.

Losing its way slightly towards the end in a significantly more morbid brand of theatre, A Rabbit for Kim Jong-Il, as enjoyable and humorous as it is in parts, could have benefited from more of the brusque and surprising humour which so greatly benefited its first act.