Why arts organisations should pay their interns, even if they can’t afford to

Within an arts organisation you are only as valuable as you are flexible and obedient.
Harriet McKay 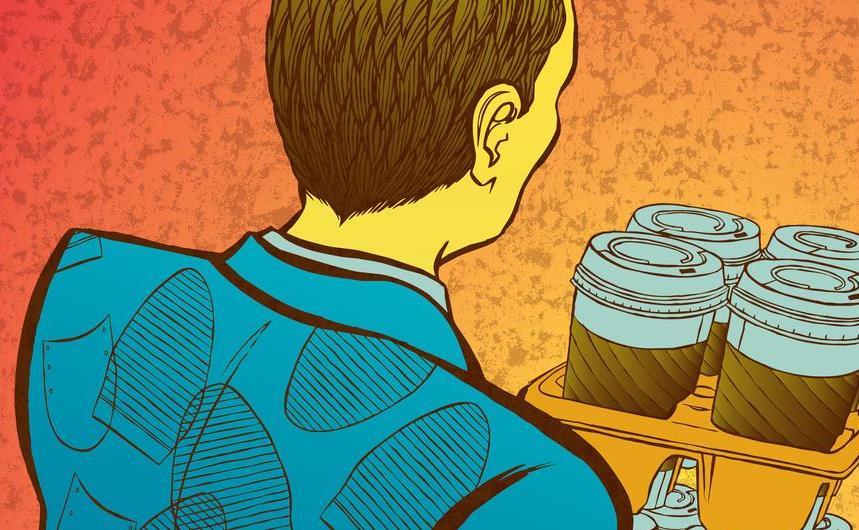 ‘Networking opportunities’ have to mean more than getting the coffee. Image Shutterstock.

I have recently been working within a community arts organisation on the eastern coast of Australia. Not unusual for non-for-profit arts organisations, this one gets by on the smell of an oily rag. With barely enough funds to pay their interns for the hours they work, as well as complying with their ethical obligation to pay artists according to NAVA guidelines, they take on unpaid interns from the local arts schools on an application basis every exhibition block. When working there over the summer, I met an intern who came in several times a week to work a full day.

As I got to know the new intern, I found out that she was completing the final year of her Master’s degree at one of Australia’s most highly regarded universities. She had been studying art history for over six years, and was currently writing her thesis. Working here for her was a ‘networking opportunity’; a chance to meet people and gain ‘relevant industry experience’. For the organisation however, it was an opportunity to get laborious jobs finished. This included: cleaning the storeroom, painting and scrubbing the plinths, data entry, social media backlogging and putting stickers on envelopes for hours at a time.

Many organisations and companies use interns for free labour on a regular basis, it has become an acceptable practice replicated in workplaces throughout the world, revealing a growing contingent work force that rely on part-time or contract work which is by its very nature unstable. The intern’s rights and obligations are obscure, and there are certain unspoken social cues which they must adhere to in order for them to be accepted within an organisation. Primarily, they must understand that they are new and know absolutely nothing. They must speak only when spoken to, remain submissive, obedient and enthusiastic at opportunities which arise, even if that opportunity is mopping the floor.

This is intensified within the arts, an industry which is notorious for its limited resources, lack of funding and little to no job prospects. A 2015 survey conducted by Interns Australia (pdf) found that internships were most common in the Arts out of any other industry, and 86% of all internships in Australia were unpaid. There is an abundance of more than willing and over-qualified university graduates who are queuing to take your position if you come to be viewed as expendable by your employee.

Within an arts organisation you are only as valuable as you are flexible and obedient – two attributes demanded by the insecurity of your position. This is a key reason why artworkers feel justified in not paying their interns, not just because they had to do it to get where they are, but also because to learn the contingency of your position is a fact which everyone in this industry has to face eventually. You should be grateful for whatever opportunity you get. But it isn’t enough just to be grateful, you also should let your employee know that you are grateful by being overly enthusiastic at the prospect of completing mundane tasks that the paid workers don’t do.

Within an arts organisation you are only as valuable as you are flexible and obedient – two attributes demanded by the insecurity of your position.

I understand that arts organisations can usually not afford to pay more staff than they have, but this argument equates to an acceptance of the belief that the work that the intern is doing is not as deserving of money as the work that the paid workers are doing – even if they do the same tasks. In her 2013 article Opportunity Costs: The True Price of Internships, Madeleine Schwartz states that the intern has become the new housewife of our era. In both cases, neither housewife nor intern consider what they are doing as work and when workers do not see themselves as workers, they cannot ask for workers’ rights. There is a highly disproportionate number of women working in unpaid arts internships across Australia who are expected to be a submissive labour force: nothing should be too much for them to take on, and if they are anything but dutiful there will be negative social consequences to face. The domestic housework which housewives have traditionally done has never been viewed as equivalent labour to paid labour, similarly the intern considers the lengthy task of clearing out the stock room as anything but work. Instead phrases such as ‘vital experience’ and ‘networking potential’ are thrown around as justification, all the while the intern devalues the dignity of their labour, and continues to perpetuate a culture of self-denigration within the organisation.

Potentially begrudged by all this, the intern with a Master’s degree who is currently scrubbing the finger prints off the plinth which she just spent an hour painting several times with white acrylic paint so watered down it could hardly be classified as paint, reasons to herself that this ‘opportunity’ will lead to paid work eventually. Unfortunately though, this is also a false presumption. The 2015 survey conducted by Interns Australia also found that 78.92% of internships did not lead to paid work within the same company/organisation.

So where does this leave us? Are unpaid interns that necessary to the survival of arts organisations that we should continue to strip them of their dignity and rights as a workforce? If your organisation decides that interns are indeed vital, then it should be your obligation to pay them for the work that they do. After all, no one would expect someone to work for six months for free – automatically we understand that this would be illegal, degrading and immoral for the worker – our thoughts should be the same for interns.

Harriet McKay is an artist and writer working in Ngunnawal/ Canberra.