Olafur Eliasson on the tipping points for artists to act 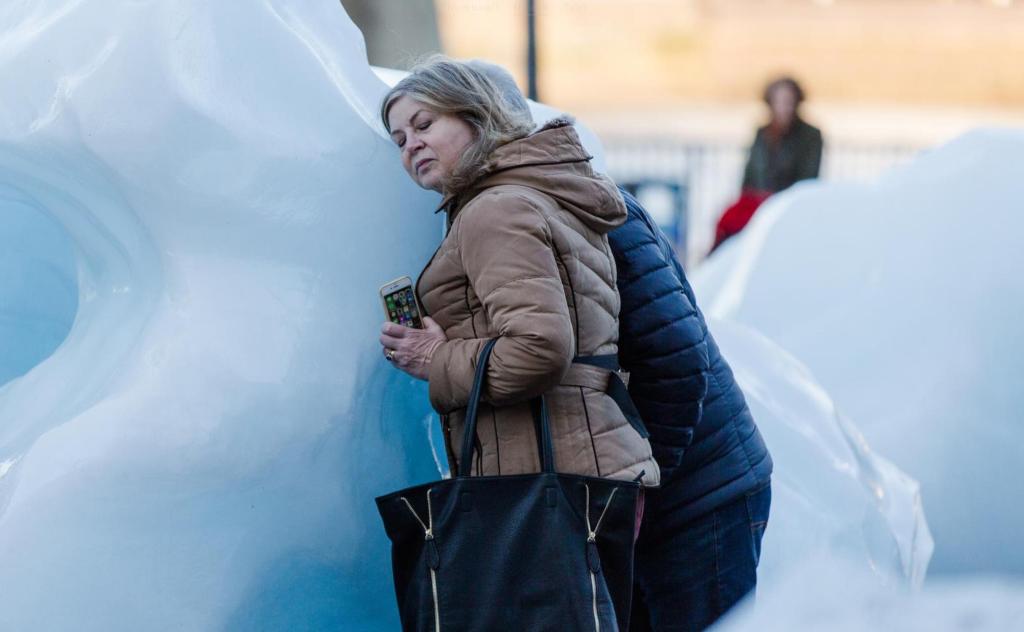 In a week where news headlines  have reported that 55 Australian towns are at risk of running out of water, our major banks and financial institutions have agreed to pull back on funding thermal coal endeavours, and bushfires continue to ravage our nation – it is not strange that we are struggling to get a grasp on our contemporary world.

Set against this backdrop, exhibitions nation-wide are both calling people to action and are offering a way for people to deal with the trauma.  Artists are helping to usher audiences through the quagmire.

One such artist is Icelandic born Olafur Eliasson, who makes no secret of his concerns for our environment. He was in Brisbane recently for the opening of his installation Riverbed (2004) – which comprises 110 tonnes of stones and running water –  forming part of the exhibition WATER, at the Gallery of Modern Art (QAGOMA).

ArtsHub caught up with Eliasson and QAGOMA Director Chris Saines on the topics of our war with nature and the contemporary role art museums play in this climate crisis.

The roles and responsibilities of artists

ArtsHub: This exhibition comes at an urgent time in Australia, and in the wake of the recent UN Climate Change Conference COP 25, global marches for climate action and Greta Thunberg fandom, and yet, politicians are notorious for not listening – working to their own agenda.

Artists play a vital role in offering a platform for these discussions within communities, but how do we get these conversations to march out of the doors of our art museums and to be invited to the political table? Largely, the arts are still viewed as either entertainment or protest?

Olafur Elliason: There is art and there are artists. Artists like myself are civic participants and have to make up their own mind what they work with, just like someone who makes milk can consider how they produce it. As artists we have no more or less responsibility than anyone else.

Then there is art itself. I can see credit in the state that art cannot be functionalised as a principal. If you functionalise art completely it is just a commodity – it is like marketing. We also have to see that the cultural structure and systems in which art normally operates is not a free space, a neutral space. We have a situation where we have the need to re-evaluate and critique the outreach of museums; how they utilitarise their responsibility to be inclusive in society.

Can artists motivate for change?

For his work Ice Watch Eliasson extracted 30 blocks of glacial ice from the waters of Greenland in public spaces in London – Tate Modern and outside Bloomberg headquarters – where they were left to melt. It was to serve as a visual reminder of the impact of climate change – to give feelings to things that are otherwise unemotional, abstract.

At the time Eliasson told design magazine Dezeen: ‘I wanted simply to change that narrative of the climate from our brain and emotionalise it into our bodies.’

Chris Saines: Your ice work, Ice Watch (2014), outside Tate in London caused people to respond in a way that they would not otherwise do to say an IPCC report (the UN’s Intergovernmental Panel on Climate Change) or a scientific paper. Do you think art has an increasingly powerful potential to really shift attitudes to some of the bigger, more pressing issues in the room, not least climate change?

Eliasson: Some of these projects – the ice in front of the museum – are really important so the city is part of the museum, and the museum also has the city inside it. Essentially, I think art is art, and had we not had climate change, the ice sculpture would still be a good work of art. It is always important art is the highest form of hope. 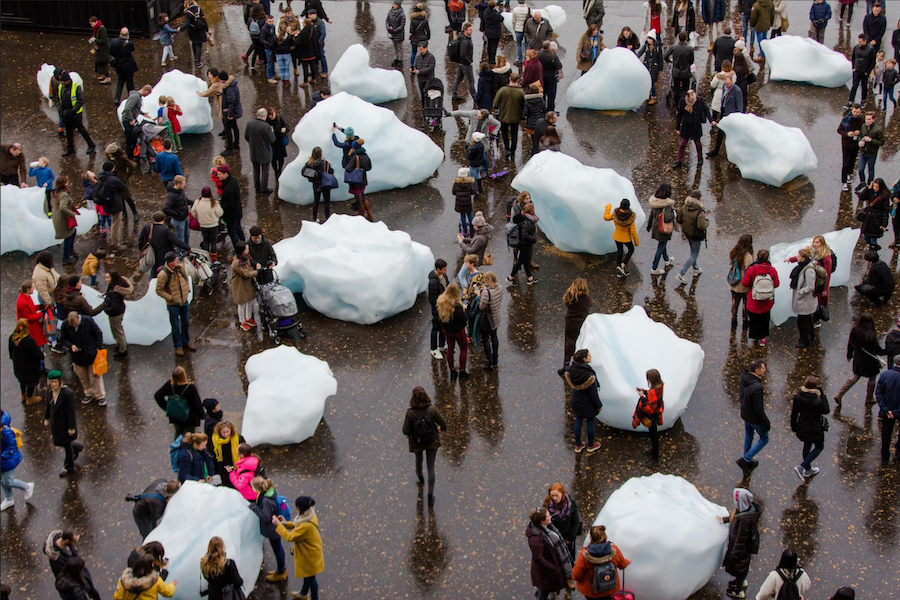 ArtsHub: What is the greatest threat to arts and culture today?

Elliason: When art and culture’s value in society changes, that poses the biggest threat, because it opens up the privatisation of something that has never been about economy or profitability. That has been the greatest problem. Why not nurture a higher trust in culture before we prevent this happening. Have we been lazy? Have we been too comfortable? Have we been taking the public support for granted? What, then, have we been doing then in the galleries, the theatres, the universities?

Art will always be art. We shouldn’t underestimate how stable it is fundamentally. It is not about the artworks; it is about the ability for a society to recalibrate its value system. When we start to take away the public relationship to culture you also start to undermine the notion of identity and belonging.

Saines: Riverbed draws you into a lived experience of nature in a setting where the natural is normally suspended, as in the art museum. I was struck by a statement of yours in a Tate publication for your work. You said: ‘We walk into a museum in order to see reality in a higher resolution.’ Is that is how Riverbed works, by amplifying the things that might otherwise go unnoticed in their normal settings?

Eliasson:  When you take a piece of landscape – a whole riverbed formation and put it in a museum – it is a reframing, and suddenly in the situation becomes “interesting”, it looks real and it has this opportunity to turn reality around. Sometimes the unreal is more real. In the museum you just get deeper to it – closer to reality.

But “realities” is a dangerous word. Having lived through the construction of perspective, we have lost the ability to see. It is a bit like you cannot undo knowing how to ride a bike; you can’t have the same experience. There is only one rule – people should be careful to make rules as they are always at the expense of someone.

Saines: So much of your early work is about self-perception and heightening a viewer’s awareness as they move through your work – a tunnel, a mist, a riverbed for example. But today it is more about building a deeper understanding of the world outside of the works.

Eliasson: There is a thread in the work that has this “numbification” – we become numb. It’s unnecessary the need for sensitising certain things that are often highly bodied – the relationship of body and mind – and that allows us to make a better judgement to conduct our lives. I think the sensation is not a wellness; it is about finding that the present is navigated by the future, and not the past.

A further element to that, is if we feel that we are in dialogue with the world, then I am more likely to vote and take social impact into consideration, and less likely to be radicalised. Radicalisation comes out of people feeling they are not being listened to. There is an interesting opportunity in this, and it is not all about embodiment. It is just using some of the basic tools, like nature.

Saines: Contemporary art museums at their best are social spaces where we can engage in public conversation that we can’t always have as easily, or readily, outside, and the power of art can be provocative and suggestive to really get those conversations occurring. How do you see the role of contemporary art, and what more could we be doing?

Eliasson: Cultural institutions are almost like a market place where people get together. But (in that environment) we should be careful to take all the pace and speed – the immediacy of the more commodity driven forum – and rather opt for the contemplative, slower qualities of the forum.

In that sense, we need to understand what is driving it. If I can’t measure, if I can’t quantify the experience, is it then something? We need to take responsibility to allow art to be abstract. The question here is more about a sense of self confidence – or lack self-confidence – in the institution by virtue of having been bashed by politicians into delivering quantifiable successes, or otherwise taking away money.  It is about being able to create a team that has a sense of direction, and this is how the museum will get out of that lack of confidence.

ArtsHub: In recent decades, museums and art school have become heavily didactic in their journey and overload our art in institutions. You speak about more bodily engagement with the art. Is there a need for more trust by our institutions to let the artworks communicate for themselves, to trust the audience more to “get it”? Are we at a critical point where we are loosing our own experience?

Eliasson: Once we have some trust in things that are abstract, and if we dare to open our narrow souls to things more long term than the immediate explanation and due diligence, then we enter a new space. We are capable of it, and a good place to start is children. We need to re-find that in ourselves. It’s very much about taking in the world with your body.

People underestimate going to a gallery. It is not like going to a shopping mall; it doesn’t have to be comfortable. People then visiting the museum also become low self-esteem because they feel they are too slow to see anything for themselves. And in a very weird way, it can be seen as a losing of trust.

You benefit a lot more if you look, listen, touch, engage. If you expect to be fed in this consumption-driven way you get disappointed. If you dare to take the defences down, you will see and hear the art, no matter how abstract. It is up to the art institution how much they lead you in that journey.

Eliasson: A nice example is that we should not be afraid re-consider the way the natural sciences have defined species in categories. It is about spheres and not pyramids. The natural sciences have become so “macho”. There is a need for de-Darwinising thinking. There is an element of focusing on the truth at the end of the formula, rather than a celebration on the process in the evolution. Art to a great extent does this. It is not science – art is art. So on a more grainy level, thesee are collaborations that are more horizontal.

Olafur Eliasson was in Australia December 2019 for the opening of the exhibition WATER at QAGOMA, which remains on show until 26 April 2020.The writer travelled to Brisbane to interview Eliasson as a guest of QAGOMA.