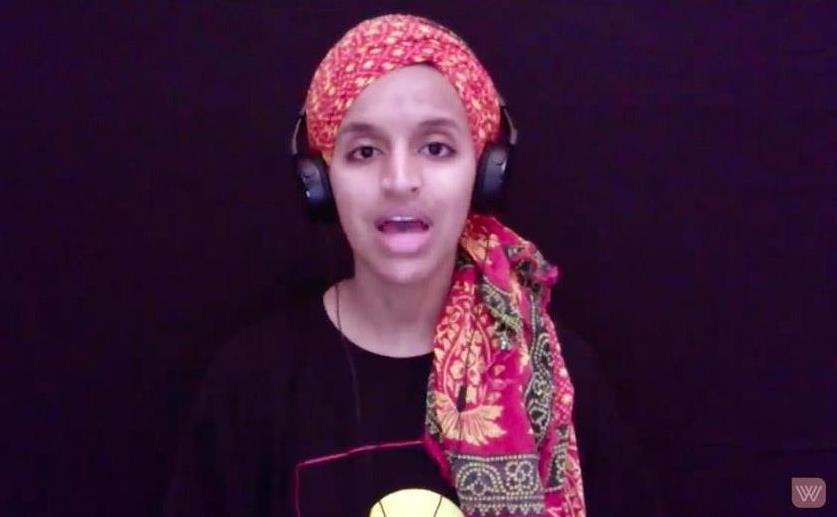 Manal Younus curator of Words Without Borders: An Evening of Poetry and Spoken Word, presented in partnership with the Refugee Council of Australia.

‘Poetry is like a bird,’ the Russian poet Yevgeny Yevtushenko famously said. ‘It ignores all frontiers.’

Streamed as part of The Wheeler Centre’s online offerings on 15 June, Words Without Borders: An Evening of Poetry and Spoken Word, was presented in partnership with the Refugee Council of Australia to mark 2020 Refugee Week (14-20 June).

Curated by Manal Younus, the celebrated Eritrean storyteller who now calls South Australia home, has bought together a group of spoken word artists and poets who performed their works over this 45-minute streamed event, including Lujayn Hourani, Hani Abdile, Flora Chol and Awale Ahmed.

‘There is no theme; they are not expected to be in any particular way or talk about trauma,’ said Younus introducing the event. She said that Refugee Week is always one of mixed feelings. ‘Refugee Week for us is ever week!’ she said.

It was a very powerful program that had a particular resonance as the world has confronted issues of racism, injustice, colonialism, blackness, and empowerment in recent weeks.

‘Currently there is great injustice happening to First Nations people, and as people who identify as refugees, having fled our homes because of injustice there, because of persecution, because of danger, it is important that we stand in respect as we are visitors on stolen lands,’ said Younus.

In the moving poem she presented was the line, ‘…there is no longer justice here, just us and power hoarders,’ her own experience offering an understanding.

The event reminded that, people whose lives have been governed by borders often find solace in the freedom of artistic expression.

Younus said the greatest lesson she has learned being among the many stories of others, is the importance of connecting with one’s ancestors. She said of the poem she presented: ‘A part of me is trying to push away things that make me different for so long. This poem is about reconnecting with my parents, my grandparents … and all the people before me.’

This is an excerpt from the poem Younus presented:

…It always ends with ‘don’t loose touch’, and in the end I am going to loose touch, not because I want to, but because I get lost for words that refuse to leave my tongue

[remembering her grandfather’s words] …who told you to look at your feet; you come from a line of generations that come preserve dignity despite occupation you pick your head up you hold your head high because we are not short of heroes

Melbourne-based Flora Chol is a South Sudanese writer and poet. She is the author of Tomorrow’s Dream, her debut poetic anthology. Chol introduced her work: ‘I believe, as a refugee, it is important that we are the ones who are leading the way and being the pioneers of telling our own stories, rather than in the audience listening to others talk about our journeys.’

She joined Younus in recognising First Nations oppression, before reading her work she made the point: ‘Occupying new spaces and new homes like Australia, we are guests living on stolen lands. We can’t talk about our plight or oppression that we have experienced without first looking at the injustice here long before we arrived.’

‘Encapsulating our current moment, and my place in this world as a black woman, and I truly hope I give it justice – sometimes you reach a point when you get tired of talking, but you just have to keep talking,’ she added.

Here are extracts from her poem ‘Home again’:

When I am here I tell myself to take everything, that is mine and never look back…

I have given so much, which I thought was mine to keep …

…Australia where is the hospitality?

Lujayn Hourani is a Palestinian writer, editor, and arts worker based in Naarm. Their practice uses little stories to ask and answer big questions. Hourani is an editor of The Lifted Brow.

They said of this week’s activities and sympathy for Australia’s First Nations people: ‘It was colonial forces that led me to be a refugee – it is the same fight here.’

Extracts from the incredible poem they read:

Maybe the word I am thinking off is suffocate, no maybe that is not it either

I just want to cut off its circulation until it says, ‘hey give me back my oxygen’, and I will say no

…Nothing ever really stops existing

Nothing ever really stops existing even if we kill it

Abdile is a writer and spoken word poet who fled the civil war in Somalia at 16, travelling to Australia by boat before being detained on Christmas Island. Ahmed was born in Somalia but grew up in the Middle East and recently migrated to Australia.

Abdile writes: ‘…sometime drowning in your own misery is better than pretending to smile,’ while Ahmed’s poem spoke of the very displacement of refugees:

… I move from one place to another … I have many homes … which one is mine?

I can’t seem to belong fully anywhere; I will be a stranger all my life…

Maybe I will find home in the people that I love…

Hosting the event, Younus shared with the others the belief that language and stories are the very fabric of our existence. Take time to listen to those stories this week.

The Refugee Council of Australia is currently running the Nobody Left Behind campaign, along with a coalition of organisation that have responded to the ineligibility of many refugees for government relief in the wake of  COVID-19.