On gender, pay and public art

Emma Coulter and Hannah Quinlivan have recently completed major metro art projects. We caught up with them on the realities of red tape, vandalism, compromise, gender and fair pair when it comes to public artworks.
Gina Fairley 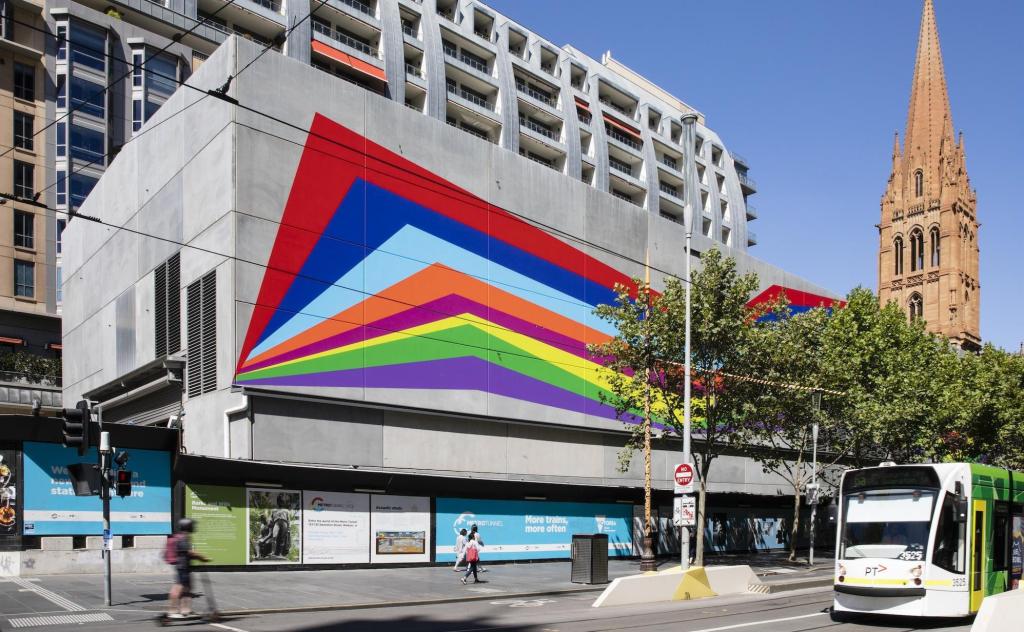 Part of the Metro Tunnel Creative Program – which has commissioned more than 80 local artists to date – Coulter’s project was conceived during Melbourne’s extensive COVID-lockdown period, and is her largest work to date.

Similarly ambitious, Canberra artist Hannah Quinlivan was charged with creating an identity for the 13 stops along Canberra’s light rail.

‘My canvas was a landscape stretching across 12 kilometres, which was a real privilege and felt like a massive responsibility to get it right, not just for me as an artist but also for the whole city,’ Quinlivan told ArtsHub.

‘I feel very aware I am working in a space that is often occupied by males,’ said Coulter. ‘But I also feel proud to be working in the space. I think it has something to do with scale and confidence and also working with construction sector.’

She said of her new work: ‘I am the lead artist and working with males to realise it. Even with my choice of hard edged abstraction – it is not usually associated with the feminine.’

Quinlivan told Artshub: ‘I’ve had mixed experiences. Some companies and clients definitely make gender equality a priority and have been really terrific to work with. Others… not so much, especially with some forms of fabrication like welding that tend to be very male dominated.

‘I’ve definitely had times where I’ve felt that being a young woman counted against me, and have had to hide the fact that I was pregnant or had a small child to be competitive in the selection process. Having said that, women can definitely succeed in this area, so don’t be put off if you are reading this!’ encouraged Quinlivan.

Coulter agreed: ‘When I started making installation work, I didn’t have children. It is very physical making large work. It is not that women haven’t done public works – I think of Margel Hinder – but generally [art] installation ends up being male dominated.’

A retrospective of Hinders work is currently showing at the Art Gallery of NSW.

Tips on negotiating the red tape

Coulter said that there were a couple of points in the commission lifespan where she felt a bit ‘uncomfortable’, that she was lacking control.

‘Everything just has to be well documented,’ she said, adding that often the sea of paperwork ends up hiding the detail.

‘As boring as they are, you have to have a really good contract, which goes into copyright and what happens on social media – as that is the platform now where everyone shares. For this project there were lots of parties involved, so who shares first and what has to be clear. The metro tunnel had all that in place, which was helpful.’

For Quinlivan, she agreed that the red tape can quickly become all-consuming, especially ‘if you are the “head contractor” on a large project, rather than working as a subcontractor to a public art company who handle all of that.’

‘My advice would be to build this into your budget and bring in the expertise you need, whether its accounting, legal or project management. Don’t try and do it all yourself,’ added Quinlivan.

With regard to getting easier with the more public artworks you make, Quinlivan said, ‘Not really!’

‘On the one hand, as I get more experienced I have a better sense of what is possible in terms of the materials, technologies and tools to use to tackle each project. But on the other hand, I tend to get more ambitious each time, so it sort of cancels out!

‘I think that if I stop finding making public art a challenge then it will be time for me to do something else,’ she concluded.

In contrast Coulters said: ‘It is definitely does get easier [with time].’ She has been making architectural interventions and public works since 2014.

‘When I first started I was working more intuitive on sight; now I have to be really resolved, even when presenting it. For this one I was not even able to be on site due to the permits. It is a strange feeling to have a team suddenly working on your work.’

The pressure to compromise

To deliver a major public artwork, one has to become part city planner, part engineers and remain part artist. Coulter and Quinlivan spoke about the positive energy of working as part of an interdisciplinary team. However, there are moments when compromise arises, and knowing how far to dig in and/or let go takes some logical reasoning.

Coulter said: ‘I am very clear what my practice is when the boundaries for negotiating things are reduced. When I presented the original concept, I had a number of ideas, and we did refine that a bit in negotiation. It wasn’t a compromise.’

Quinlivan added: ‘I’ve been lucky to learn from some real professionals who have understood my ideas and supported me to realise them. There are of course limitations that working in public spaces entails. But in some ways that just keeps me sharp and forces me to solve new creative problems. Sometimes the constraints on a work hold the seed for a whole new idea or way of working.’

Coulter said that in most cases both parties can arrive at a workable outcome. She used the example of Richmond Town Hall, who wanted to commission a major mural work but didn’t have the budget to do so. ‘I said, “no, I can’t make it at that budget” and we came back to a fabric solution to the columns – the solution didn’t compromise anything. There are ways of holding on to that integrity as artist,’ she said.

Vandalism – it is your responsibility?

The topic of vandalism and public art came into sharp focus earlier this year, when a mural commemorating NAME by ARTIST was tagged with graffiti in less than 24-hours of its making.

For Coulter’s recent work it will unlikely be a problem, given the location being too difficult to access.

She said she was not a fan of the anti-graffiti paint. ‘I have been disappointed with outcome of the anti-graffiti coating, as it leaves a glossy surface that picks up reflections – plus you have to apply it perfect or it can leave drips. So it’s just another aspect – to get an expert to do it. My feeling is it is just paint – so paint over it if you need to.’

‘Vandalism and maintenance are always an important consideration. This is where it can be really helpful to be working with a team of experts who might have some good advice about tweaking materials or fabrication methods to maximise durability without compromising your vision.’

She added: ‘They don’t teach you this stuff in art school!’

Public Art Commissions are usually a layered and protracted experience. Quinlivan said that she was long-listed for the Canberra Light Rail shelters in November 2016, well before they were unveiled to the public in April 2019.

Coulter was shortlisted to create a concept design back in July last year. Her Metro Tunnel Commission was only unveiled this month. ‘It’s a very long approval process because there are a lot of stakeholders.’ She added that COVID-19 further complicated the timeframe.

Getting the scale right

Perhaps the best ways to demonstrate scale is material. Coulter used 220 litres of paint to delivery her work – a calculation she had to do, and cost.

‘When you are making public works, you have to really think about what is around – the trees, the different views. I made a model, which was an important part of resolution of the work. I tested 30-40 different ideas and eventually this is the one that worked on the canvas of the building.’

Quinlivan added: ‘This is always a challenge, especially in cases where the space is under construction so you can’t even tour it.

‘Things like 3D renders can help, but they can also be a bit deceptive so I always try to do one-to-one scale mock-ups, even if just of a section of a work to make sure the scale is right. I find scale to be a matter of how your body feels when standing in front of an artwork, so for me large scale experiments are part of the design process,’ she told ArtsHub.

Arguing for a commensurate pay rate

Often the fee for public artworks gets soaked up like a massive sponge in the fabrication costs, leaving a very little fee for the artist, that is hardly commensurate with the level of work they do.

There has been a call for the public art sector to better financially recognise the artist, especially when ‘tradies’ are on around $80 an hour – for every clocked hour.

Quinlivan said: ‘It’s true that the artists sometimes get the lowest wage of anyone working on public art projects if you work it out by the hour.’

She continued: ‘But on the other hand, public art projects are much better even than working for public galleries that offer an artist’s fee that barely covers the costs of materials or parking, let alone the months of free labour that goes into a show!’

Coulter added: ‘I have found it helpful when budgeting a project to literally break it down – not just a lump sum – but to explain each line item in details. It helps, but the downside is you have nothing to fall back on if the hours go way off.’

‘The budgets look healthy from the beginning and artists will always say yes for the exposure; and if you don’t someone will take it and that doesn’t help the situation. No one is negotiating with crane driver!’ she added.

Quinlivan made that point that, ‘Unlike an exhibition in a commercial gallery, with a public art project your income is generally locked in from the start, so there’s no uncertainty around whether works will sell and so on. Compared to government grants which seem to shrink each year, public art commissions tend to go ahead regardless of austerity budgets or political decisions.  And public art projects were one of the only things that carried on during the pandemic, when every other exhibition was cancelled.’

There are obviously huge problems in the arts generally around artists getting paid, but in my experience public art projects often pay artists better than the rest.

Quinlivan concluded: ‘I’ve really thoroughly enjoyed working on public art projects. It provides a real opportunity to push my practice creatively across materials and scale that I couldn’t otherwise achieve.

‘Most of all I love that people who might not otherwise go to an art gallery get to see my work every day, just as part of their regular commute. If my public artworks can brighten or enrich people’s lives only a little every day, then I’d feel very happy!’