Life Through a Noongar Lens: photographs that re-tell history

Ahead of Reconciliation Week we look at an exhibition of rare photographs taken by one of Australia’s earliest First Nations photographers giving an insight into everyday life, pre-citizenship, from a Noongar perspective.
Dr Lucy Van 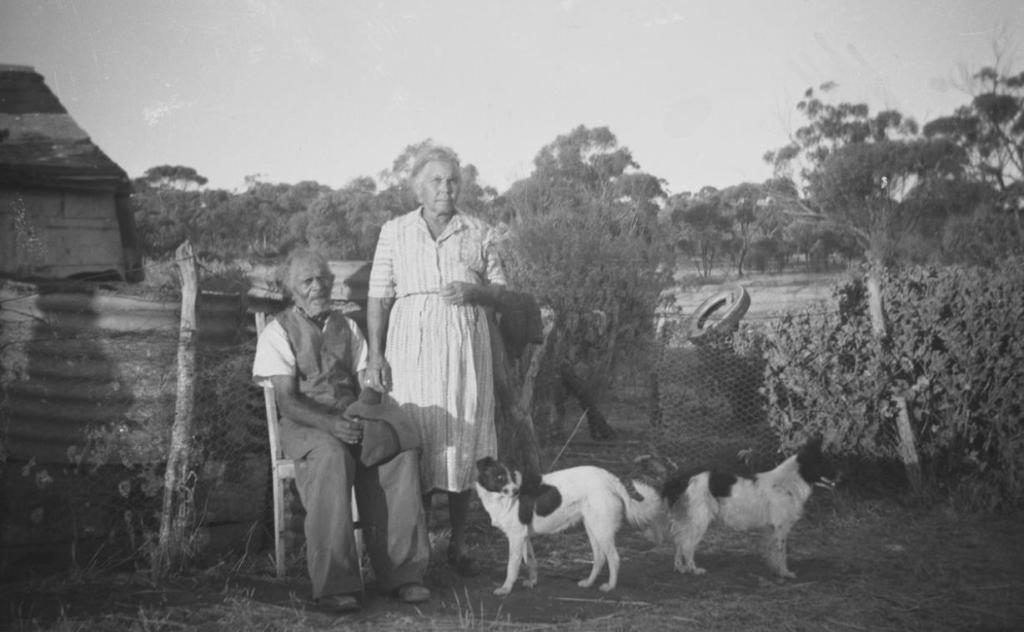 Co-curator Michelle White explains that the photos had been taken by Dallas’ late mother Mavis Phillips (nee Walley) between the 1930s and 70s, capturing daily life in the Wheatbelt, from a Noongar perspective.

Dallas carted the photographs all over Western Australia for a couple of decades. Little did she realise she was carrying a rare collection of photographs, taken by one of Australia’s earliest Aboriginal photographers.

Today that incredible archive is the foundation of an exhibition, The Mavis Phillips, nee Walley, Collection, currently on show at the Perth Centre for Photography (15 May – 31 July), with a satellite exhibition concurrently on display in The Nook at the State Library of WA (21 May – 25 July).

Dr Lucy Van recently sat down with Dallas Phillips, who has co-curated the exhibitions, to discuss their alternate narrative – one through a Noongar lens. This is an extract of their conversation.

‘We were not natives in the way they thought we were’, says Dallas Phillips, who is talking to me about her mother, Mavis Phillips née Walley’s collection of photographs. ‘Of course, we were native to the land,’ she continues. But we were modern, is the implication.

She tells me about how splendidly her mother dressed, of how she got ‘dolled up’ whenever they went into town. Dallas directs my attention to the meticulous way she and her siblings are dressed in the photograph amidst the dandelion. 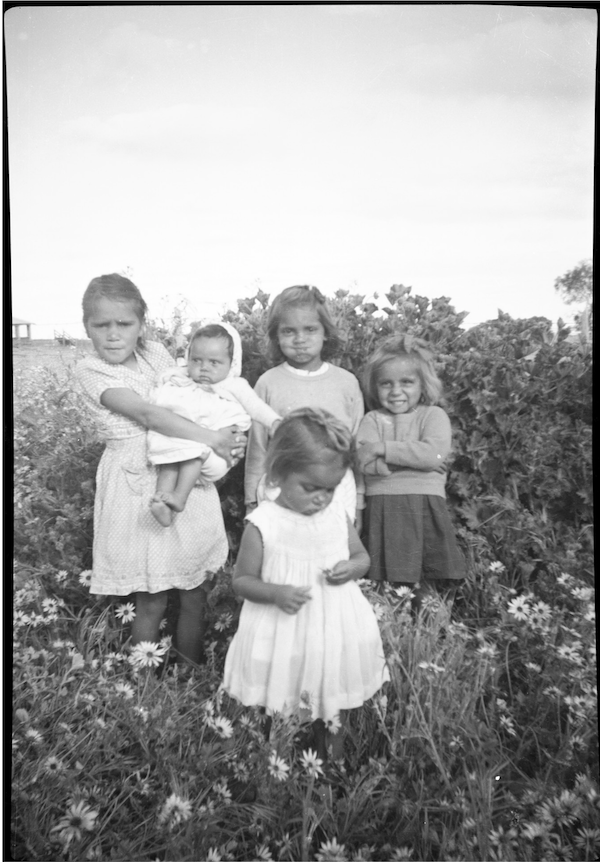 To gaze at this picture is to open one’s eyes to a world rich in spontaneity and innocence. The beauty of the children, the thriving dandelion, the confident framing of the moment, are all indubitable. What else does Dallas see in this photo?

‘It shows how well Mum cared for and provided for us; how well we were sheltered and loved … It’s a tribute to our dad, too,’ Dallas continues, highlighting that her parents were a strong team.

They had to be, to survive the indignities and hardships they faced as mother and father to a young Ballardong Noongar family whose lives were legally governed by Protectionist and Assimilationist policies in Western Australia during the twentieth century.

‘Mum and Dad had to get permission to get married from Neville-the-Devil [A.O. Neville, the notorious so-called Chief Protector of Aborigines]’, Dallas tells me.

However, of the many outrages to cultural dignity and autonomy brought about by the government, according to Dallas the worst for the family began shortly after the era of Neville with the implementation of the Native Welfare Act (1954), which led to the family’s forced removal from the Smith’s farm at Goomalling to the Goomalling Reserve.

‘That is when we went down,’ says Dallas, explaining how the family went from leading self-sufficient, sustainable lives on the farm where ‘everyone worked as a team’ and ‘nothing was wasted’, to living in crowded and deprived conditions with other Indigenous families on the reserve.

‘It was basically apartheid.’

Here, the family was made dependent on rations and subject to curfew, unable to leave and enter the main part of town without written permission.

With the nocturnal visiting of wadjela men to the reserve came grog, violence and sexual exploitation. And eventually came the greatest trauma: the removal of children to New Norcia, ostensibly to get an education, but in actuality, to perform unpaid domestic labour and most tragically, to be exposed to the high risk of child sexual abuse.

In 2017, Dallas would bravely give evidence at the Royal Commission into Institutional Responses to Child Sexual Abuse, an important step in her journey toward healing. In its final report the commission found one in five Benedictine priests from 1950-2010 allegedly abused children (triple the average for Catholic institutions in Australia).

The story goes well beyond ordinary hardship into the territory of forced displacement, social exclusion, systemic abuse, fragmentation of family and culture, and intergenerational trauma.

Yet with the photographs taken by Mavis Phillips this story also enters the territory of hope, beauty, and strength, reminding us that Noongar people like the Phillips family not only survived, but found ways to thrive even under the gravest existential threats.

The endurance of the tin holding Mavis’s negatives – carried by her daughter for over 40 years until she brought them to CAN’s attention in 2015 – attests to this.

That over 300 of the original negatives (that number over 1000) could be restored as we see them today [in this exhibition] seems a thing of utter joy. As Dallas puts it, ‘What she captured is just gold.’ 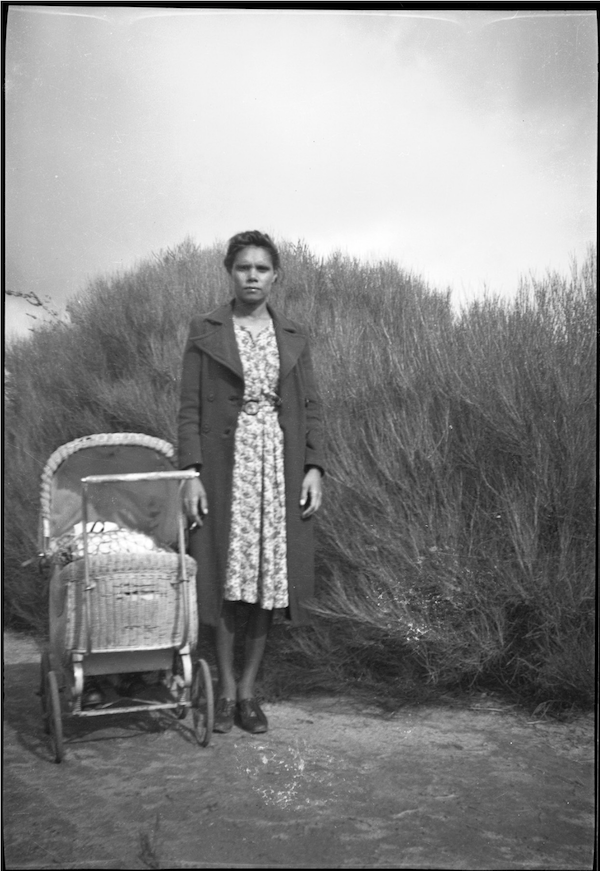 With the earliest photos dating from the late 1930s and the latest from the 1970s, this collection of images shows something that is rarely seen in the historical record: Noongar life as it was lived and valued from a Noongar point of view.

Since the discovery of photography and the founding of the Swan River Colony – they happen to be nearly contemporaneous – photography of Indigenous people has been used by government workers, missionaries, ethnographers, and anthropologists as a dehumanising instrument of knowledge and control.

‘I’ve seen a lot of Noongar photos that are nothing like my mum’s’, says Dallas, pointing out how unstaged and alive her mother’s photos appear in the contrast.

While missionary photographers compelled their subjects to sit still and smile, only to take the frilly dresses away once the camera was packed down, ‘[Mavis] captured us as we were.’

The Mavis Phillips née Walley Collection enters the historical record bearing radical evidence of joyful and connected lives. At the same time, the collection evidences the specific joy that Mavis found in photography.

This impressive woman, a resourceful mother raising eleven children in the Wheatbelt, happens to be one of the earliest known Indigenous photographers in Australia.

Remembered for constantly ‘clicking away’, she seems to have found in photography a joy for visual composition and experiment, a modern pleasure in gazing, and a love for looking at beloved subjects – family, nature, and home – as they were to her: just gold.

Placing this important archive of images in the public domain, means that they will never again be buried.

The Mavis Phillips (nee Walley) Collection in on display at Perth Centre for Photography (King Street Art Centre) until 31 July, and The Nook, State Library of Western Australia 21 May-25 July.

This article is an edited extract of a catalogue essay.

Dr Lucy Van is an Honorary Fellow at the School of Culture and Communication, University of Melbourne.