How indie theatre-makers are fighting back after COVID-19

Independent theatre companies in Adelaide are preparing to welcome back audiences, but how will a post-COVID world shape their programming?
Richard Watts 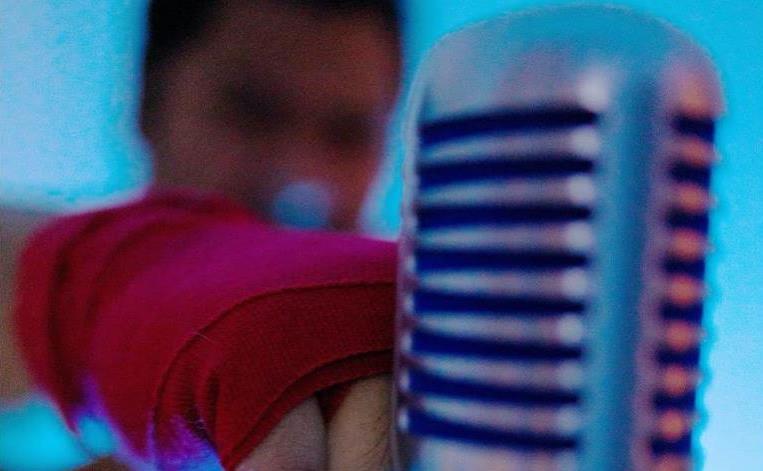 Publicity image for the upcoming production Blood, Sweat & Karaoke, to be staged at RUMPUS in December 2020.Photo credit: Ezra Juanta.

While major theatre companies and commercial productions won’t be able to open for some time, given that it’s simply not cost-effective for them to play to the curtailed audiences required under social distancing guidelines, some independent theatre companies are already preparing to welcome back audiences.

In Adelaide, RUMPUS (an artist-run collective who present an annual curated season at their factory-turned arts space in inner-city Bowden) and Theatre Republic (established in 2018 with the aim of supporting local artists and revitalising Adelaide’s indie scene) have each launched their 2020 seasons. And while COVID-19 may have impacted some of their plans, neither company has been daunted by the challenges they face.

‘We decided to launch our season basically as we had planned it prior to COVID,’ said RUMPUS co-founder Rebecca Mayo, an independent performer and theatre-maker.

‘Because of our relationship with artists – which is more collaborative rather than us just being a producing house in which we decide whether the show goes ahead – we wanted to leave the decision [as to whether to proceed or not] with the artists as much as possible. So we put the program out in the world in April in a hopeful way, to see what would happen and how the chips would fall.’

While there have been some change to the season since its April launch, the first RUMPUS productions for 2020 – Chameleon, the debut solo show of actress and clown Brit Plummer, and an in-development showing of Hits of the 70s, 80s & 90s – both open next month.

‘We’re super proud that we can be potentially one of the organisations that opens our doors earliest and gets people back out seeing theatre and gets artists reaching their audiences again,’ said Mayo.

The small and flexible nature of the RUMPUS theatre, which seats approximately 50 people, is one of several factors that has allowed the artists programmed by the company to return to live performance relatively quickly.

‘We’ve been lucky enough to get some funding from OzCo again for this year’s season, so we have that money to give to artists too. They do depend on the box office a bit because it’s a box office split with RUMPUS, but it’s not as huge a consideration as to whether to put on a show or not,’ Mayo explained.

‘Unfortunately, most of the time an independent artist has to consider that they’ll probably lose money if they put on a show, so it’s just a different ballgame. There’s definite challenges in being a small operator, but we just have that much more flexibility,’ she added.

‘We’re super proud that we can be potentially one of the organisations that opens our doors earliest and gets artists reaching their audiences again.’

Theatre Republic’s 2020 season has also been impacted by COVID-19, with their production of Angus Cerini’s The Bleeding Tree rescheduled from August to December. At one point the company was considering cancelling the production altogether, explained Artistic Director/CEO Corey McMahon, though thankfully such drastic action wasn’t considered necessary.

‘I’m really glad that we took the decision to delay it. It’s such a fantastic play and I don’t think it would have come to Adelaide were it not for us chasing it as we did. We spent 18-months chasing the rights to this play. So for it not to see the light of day would have been a real tragedy. We ended up delaying it until December and happily all of the creative team that we had engaged with the project are able to stay on,’ McMahon said.

While he was initially concerned that a December season might be too late in the year to attract Adelaide audiences, McMahon now believes that the end-of-year dates might work to the production’s advantage.

‘As a friend of mine rightly pointed out, had we gone earlier, say October, people might still be a little bit reluctant to go into a theatre, so the December production date might actually work in our favour, I think. People might be more comfortable going into a theatre at that point in the year,’ he told ArtsHub.

As with others states and territories, the South Australian government has recognised COVID-19’s impact on the arts sector and provided emergency funding to help artists and arts organisations survive through the current crisis.

In South Australia, that funding included a series of rapid response grants, which both RUMPUS and Theatre Republic successfully applied for.

‘We were very lucky to be a recipient of one of the COVID-19 quick response grants,’ said McMahon, ‘which meant that we could rapidly respond to the challenge of not being able to put a show on in a theatre and in actual fact find a way to take that theatre out to people in another form.’

That response has seen the creation of PodPLAY, a four-part audio drama series of new local plays. The first in the series, Helen by Elena Carapetis, will be released next week, with new works by Duncan Graham, Emily Steel and Phillip Kavanagh to follow.

Later in the year the company are also presenting a series of new plays, written and rehearsed in just a few short days, in order to respond to and capture the urgency of the climate emergency.

‘Climate change hasn’t gone away during the pandemic. It’s still a very potent issue. It’s a fact that the environment has, in a sense, had a bit of a break from humans pounding it every day. Pollution has cleared and wildlife is returning to spaces and things like that. I mean, if that’s not clear evidence that we’re having a detrimental effect on the environment and we should be acting on it, I don’t really know what is,’ said McMahon.

RUMPUS are using their rapid response grant to reach audiences outside the physical space of their theatre.

‘We were able to get some funding from DPC [Department of the Premier and Cabinet] through their quick response COVID grants to get some equipment to livestream and digitise our work,’ said May. ‘So, especially with the some of the developments that are happening earlier in the year, we’ll be streaming and digitising those. So while the virus is still around and people are a bit more cautious, or when we’re not able to open our doors in an effective way to audiences, then we’ll be presenting work digitally, and we’re excited to be able to do that,’ she said.

Given that some people will be nervous about returning to live performance, RUMPUS are taking appropriate measures to keep audiences safe.

‘We’re organising hand sanitiser and regular sanitisation of surfaces in the venue. When we do open up for audiences, it’ll be a question of looking at what the recommendations in terms of social distancing are, because again, as we’re a little black box, we sort of have flexibility in terms of how we arrange our audience. So we can, if necessary, have those distances between audience members if we need to,’ Mayo said.

Social distancing is also likely to affect Theatre Republic’s production of The Bleeding Tree, a possibility McMahon is prepared for.

‘The theatre we’re performing the show in is at Tandanya, the National Aboriginal Cultural Institute, and the capacity is greater than what we need, quite frankly. So we think that actually, the spare capacity we have up our sleeve will work to our advantage, so that we’ll be able to reduce the number of tickets we sell per show and then utilise that space to ensure that people have the kind of physical distancing that’s required, should those measures still be in place in December,’ he said.

Shifting the production from August to December has been a challenge, McMahon admits, but it’s one that Theatre Republic are taking in their stride.

‘We’ve taken a hit moving the show, there’s no doubt about that. We’re already adjusting our expectations in terms of the numbers we’ll get in and how we are going to have to manage that as well. But that’s just the reality we’re all going to be living in for the next little while, I think.’

THE FUTURE OF THEATRE

The challenge of balancing audience numbers and social distancing requirements with budgetary demands aside, there’s another factor that will impact life performance in the coming months: how will companies safely stage work that requires close physical proximity such as dance routines, a fight scene or a sex scene? And will hygiene guidelines result in us seeing more minimalist work that doesn’t require multiple people to move – and to touch – props, sets and costumes?

Mayo is excited by the challenges. ‘I think absolutely that future productions will be taking into account physical proximity between performers and also with the audience – as well as set hygiene in a way that hasn’t really been an issue before. I hope that we see productions responding creatively to that challenge,’ she said.

‘Maybe we’ll see some less orthodox stage configurations so that the audience can be kept socially distanced? Who knows! I actually think it’s so exciting when you can see theatre responding to real world requirements in inventive ways, so I sort of can’t wait to see what practitioners dream up.’

McMahon is also curious about the immediate future of theatre. ‘As we always do as artists, we will adapt, and we will find a way to make to make the art form live despite the challenges we’re all going to face,’ he said.

There’s a lot to think about, he continued. ‘Is it feasible, is it morally right to ask actors to perform scenes that may require a high level of intimacy when we clearly need to be aware of COVID-19? I definitely think it’s going to impact the work that we program.’

Such measure may result in fewer shows being programmed, and will almost certainly result in companies of all sizes programming different works to what we saw before the pandemic began. But whatever happens, McMahon is convinced the show will and must go on.

‘I think it’s going to mean some big challenges and big changes for us, but we always adapt. I’m preaching to the converted here, I know, but we are a resilient mob and we’ll come back. We will. We have to tell stories; we have to create theatre. We just don’t have any choice, really. It’s in our DNA,’ he laughed.

Learn more about Theatre Republic’s 2020 season and visit RUMPUS for information about their upcoming productions.