'Reports of our death have been greatly exaggerated,' the company said in a media statement on Wednesday night.
Richard Watts 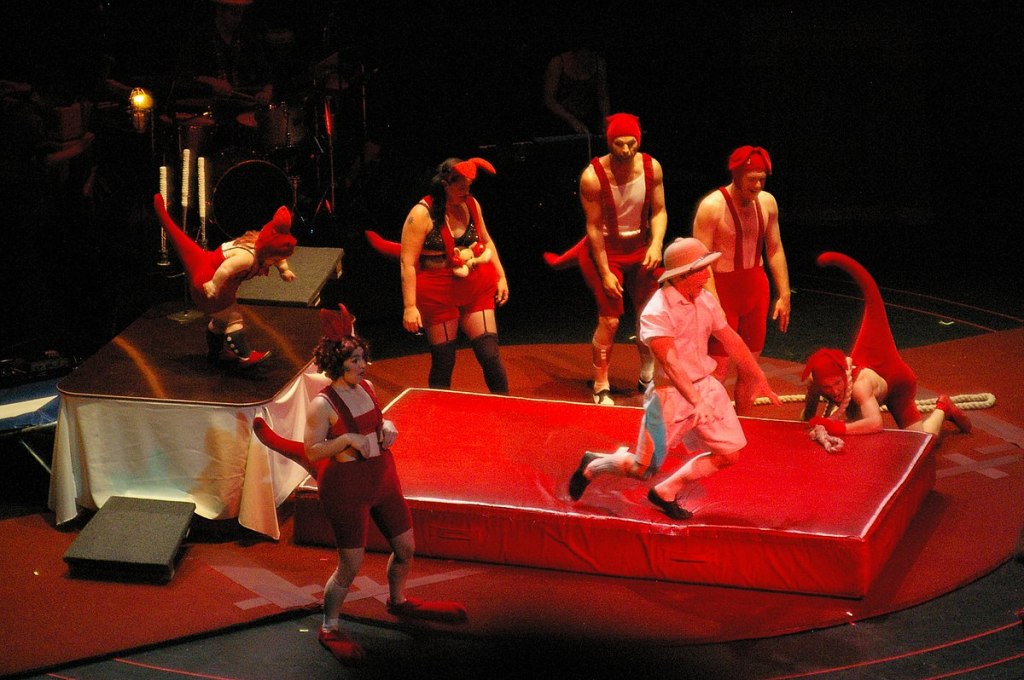 A 2009 Circus Oz performance. The company this week has stepped back from the brink. Image: Wikipedia.

Following an Extraordinary General Meeting held on Wednesday 16 February, an entirely new Board – which has the full support of Company Members – has been appointed at Circus Oz.

The four new directors – Regina Hill, Bryce Menzies, John Paxinos and Chad Albinger – will work together with the Company Members to steer Circus Oz into the future.

The previous Board had announced in December that they would wind up the company, a move that was seen as precipitate by many of the Company Members and which caused widespread sector concern.

Read: Circus Oz: A crisis in a crisis

No members of the previous Board will continue with the company; ArtsHub understands that all senior staff have also left Circus Oz.

Who is on the new Circus Oz board?

She has experience working across the government, not for profit and philanthropic sectors, including work within community and professional arts, disability, mental health, ageing, parenting and early childhood development, family services, education, training and employment, youth and adult justice, out of home care, Indigenous and community development and environment.

Hill is a Director of for profit and for purpose organisations, Caraniche and Collaboration for Impact, and the Archie Roach Foundation. She has previously been the Chair of the Women’s Circus. Hill has an MBA, Master of International Laws, LLB Hons and a BA (History and Economics).

Subsequent to the publication of this article, Hill spoke at length with ArtsHub regarding the new Board’s immediate challenges and priorities.

Bryce Menzies has worked in entertainment law since 1984. He is currently a partner at marshalls + dent + wilmoth lawyers where he is head of the Entertainment Department. Menzies has been a recipient of the John Howie Award for Outstanding Leadership, Achievement and Service to the Victorian Screen Industry for his many of years of service as entertainment lawyer and producer.

John Paxinos is the Managing Director of John Paxinos & Associates Pty Ltd, specialists in developing financially sustainable arts organisations. He established this firm in 1988 to provide management, consulting and financial services in the arts and cultural sector. In 1992 he cofounded Auspicious Arts Projects Inc, a not-or-profit organisation that provides a management partnership for Independent Artists. Paxinos has an MBA and was a co-founder of the Chartered Accounting firm, Paxinos & Habash Arts Tax in 2016.

Paxinos began his career in Arts Management in 1980 when he was appointed General Manager of the Murray River Performing Group and Flying Fruit Fly Circus in Albury-Wodonga, a role he held for six years. In his current role clients include arts conferences, arts services organisations, community arts organisations, festivals, film and TV production companies, venues and literature, performing arts and visual arts organisations.

Chad Albinger has a BA (Visual Arts). He has specialised in theatrical rigging primarily for contemporary circus. Albinger works as a production and performance rigger, props designer, furniture, designer and fabricator. He has long and varied experience in all aspects of performance rigging from design and development stages, to rehearsal and performance. His performance touring history since 1999 includes a wide range of venues from concert halls in opera houses to a multitude of regional theatres, exhibition and convention centres to basketball courts and public parks.

Albinger has worked extensively throughout Australia, as well as internationally in many countries including the USA, the UK, Italy, Mexico, New Zealand, Hong Kong, and Singapore. In addition to his rigging roles, Albinger has been integral to the rigging and erection of the Circus Oz Big Top (1,300 seats). From 2007 to 2014 he performed on stage for Circus Oz in both group and solo acts and has previously acted as a member-elected Board Member.

With a depth of both governance and cultural sector experience, the new Board‘s immediate challenges include exploring the potential of reopening the company’s Collingwood headquarters (which are owned by the Victorian Government and managed by Creative Victoria) and securing the company’s financial stability.

The potential loss of Australia Council funding was one of the reasons behind the former Board’s decision to attempt to drastically remake Circus Oz, a decision which was rejected by the majority of Company Members and led to the recent crisis.

The viability of the company’s funding and the state of its cash reserves are currently unknown.

In a statement, the company said Circus Oz has a proud history of leadership in the circus arts in Australia and around the world, and maintains a strong commitment to the agency of its people, the creation of original work that connects with the broadest possible audience, equity and social justice in the Australian and international community and to the wider circus sector.

‘Circus Oz will be guided by these values,’ the statement read.