MELBOURNE CABARET FESTIVAL: When you share an audience with The Fabulous Singlettes you can expect a wonderful feast of nostalgia through song, where innuendo abounds.
Eugenia Twomey
[This is archived content and may not display in the originally intended format.] 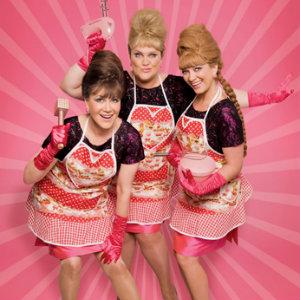 Cruise ships have given cabaret a bad name. It’s not until the emergence of more contemporary performers in the genre (Taylor Mac, Tim Minchin etc.) that audiences have returned their bums to cabaret seats. So to those unfamiliar with the genre, unless it had a sexy burlesque leaning, one’s mind probably conjured a failing piano bar, where elevator music, bad comedy and uninspired vocals went to die.

Then, in storm The Fabulous Singlettes. Leave behind any such fears about outdated and tired cabaret, because these Queens of the Beehive are nothing of the kind. Dressed for the part, in self-professed ‘Tropical Sunset’ a-line, fuchsia and orange silk frocks, these ladies are all-singing, all-dancing, solid gold vocal entertainers.

With no former knowledge of the trio, I was somewhat curious as to what was in store. I was sat among a full Chapel off Chapel audience brimming with Baby Boomers, politely lubricated with pre-theatre beverages, ready to be impressed. We were certainly not to be disappointed.

Naomi Eyers, Melissa Langton and Diane Dixon opened gloriously with ‘The Shoop-Shoop’ song, which launched the evening’s repertoire of back-to-back 60’s classics and plenty of kitsch and kinky chat for which the group is renowned: ‘My Guy’; ‘Be My Baby’; ‘Needle in a Haystack’; ‘When You Walk In The Room’; and Lesley Gore’s ‘It’s My Party’ were among the crowd-pleasing numbers on the play list.

Throughout the solid 90 minute performance one’s ears were being pleasantly assaulted with some serious vocal talent and perfectly complementary band backing (whose musical highlight was the fabulously meaty instrumental interlude of the 70’s anthem, ‘Shaft’). Eyers has a masterful vocal range with an enduring power to her voice, and a ballsy stage act to match. Langton breathes originality into her buxom character, and endearingly communicates emotional nuance in song and action. Dixon plays her role as naïve nymphette to a tee, although is no shrinking violet when it comes to her flawless vocal delivery.

It would be remiss of me to ignore the 20 year history of The Fabulous Singlettes. Put simply, they are accomplished veterans of not only the Australian music circuit, but they have also enjoyed resounding UK and European fame built on performances with the likes of Tom Jones and others. When you share an audience with The Fabulous Singlettes you can expect a wonderful feast of nostalgia through song, where innuendo abounds and there’s plenty of “joie de vulva” for all to enjoy.

Eugenia is a Melbourne-based freelancer with a passion for the creative and the digital - particularly their future matrimony. She has a background in music, design and communications and is always looking for another string to add to her bow.