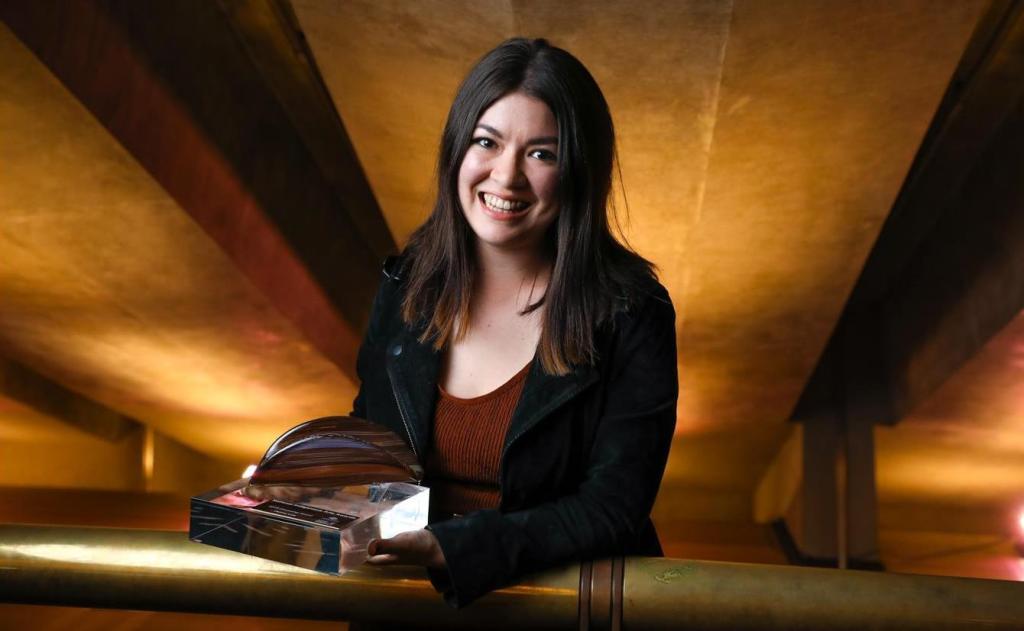 As an emerging First Nations artist, she said the Dreaming Award has opened doors and – crucially – validated her work.

Lee encourages emerging artists to apply. Nominations are now open until 4 November for the Dreaming Award, for young emerging artists, as well as the life time achievement Red Ochre Award.

She received the award in May this year. ‘I had just turned 27, so it was my last chance to receive it,’ she told ArtsHub.

‘Winning was overwhelming and humbling. Aunty Lola [Greeno] won the Red Ochre Award for lifetime achievement, and she is one of my absolute inspirations. It was amazing to receive the award on the same night as she received hers.

‘It reminds me that I have so much to learn, and I must take this opportunity and use it as well as possible because it’s an opportunity that people like Aunty Lola didn’t get.’

Lee said that winning the award was hugely validating. ‘It was more a kind of expression of interest, in that I had to submit an idea and the award was based on that and, I guess, on my portfolio as a practicing artist. It opened a lot of doors.’

Having the ballast of the Dreaming Award made it much easier for Lee to approach museums in Europe and ask to access their collections.

She is a Larrakia, Wardaman and Karajarri woman who identifies as a queer, mixed race, Asian, Aboriginal woman, and her art practice is strongly influenced by these overlapping identities.

Her proposed project, A Cure for Distance, is an ambitious curatorial investigation with four to five Aboriginal and Torres Strait Islander artists. The aim was to investigate anthropological collections in museums, libraries and archives in Britain and Europe, to explore, research and create in response to the Larrakia, Wardaman and Karajarri objects held within them.

The Dreaming Award comes with a grant of $20,000, which has allowed her to move between London, where she is based, and Australia in order to meet her collaborators face-to-face, something she said is completely necessary.

‘It’s been really important to meet physically, and have face to face conversations,’ she said. ‘Especially with something like this, where artists might be dealing with potentially confronting material.’

She said that it’s been a slow process gaining access to institutions, but she has already generated a strong relationship with the Pitt Rivers Museum in Oxford. ‘They have been incredibly wonderful,’ said Lee. ‘They will be the central point for accessing British collections.’

‘It will culminate in an exhibition at the Museum of Brisbane,’ said Lee. ‘It will be my first step into the curatorial process, curating other artists is a bit scary. But the award has given me confidence about its validity.

‘I have been working as a commercial artist for the past six years. I have to keep reminding myself that literal experts have decided that I could do it. Some pretty amazing selectors chose this project.’

The Red Ochre Award for significant lifetime achievement, comes with a grant of $50,000. It was established in 1993 by the Australia Council and, like the Dreaming Award, is given annually.

‘The Red Ochre Awards are among the largest First Nations arts awards in the country,’ said Patricia Adjei, Arts Practice Director First Nations Arts and Culture at the Australia Council. ‘And they make a significant contribution to the artists.’

She said that the Red Ochre Award recognises senior artists at a later stage of their career, helping them to create a new body of work by offering real support.

The Australia Council is seeking nominations for the Dreaming Award and the Red Ochre Award, which recognise the achievement of First Nations artists. Applications close 4 November.