Celebrating the spirit of cabaret

Slapdash song night offers punters a free sneak peak into some of the best musical acts of the Sydney Fringe Festival.
Melanie Sano 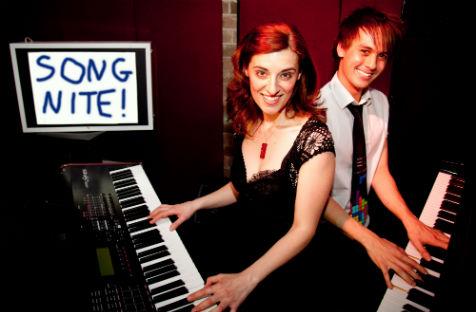 Slapdash song night offers punters a free sneak peak into some of the best musical acts of the Sydney Fringe Festival.

With so many shows on offer at this year’s Fringe Festival it can be near impossible deciding which ones to attend. Slapdash Song Night takes some of the guesswork out of things by showcasing musical segments from many Fringe acts as part of a monthly Sunday night cabaret show.

With a motto of ‘singy-sing, talky-talk, drinky-drink’ it’s clear the spirit of cabaret will be present in its most rambunctious form each night.

Keira Daley, who was awarded the 2011 Sydney Fringe Award for Excellence for her solo cabaret show LadyNerd, will be the host of Slapdash song night. She will be accompanied by Mark Chamberlain, repetiteur and musical director of musical theatre and cabaret for productions such as Fat swan, The last five years, and The annual cabaret showcase, in a bid to get the city of Sydney ‘singy, talky and drinky’.

According to Daley, the audience can expect an energetic program of live music with a talk show element in an old-time saloon environment. ‘The atmosphere will be great, the drinks will be flowing, and the show will be a bit rowdy and very entertaining. And it’ll be a place for artists and punters to meet and mix.’

The line up includes Benny Davis (Axis of Awesome) as The Human Jukebox, the cast of Joanna Weinberg’s new musical Lifeforce, comedians Alice Fraser and Susie Youssef, Dance With deVil’s Brendan Hay, He Said, She Said: At It Again’s Julian Kuo and Holly Summers-Clarke, Melbourne singer/songwriter Andrew Finegan, and many more.

A key factor of Slapdash song night is the social aspect, with audience members getting the chance to meet key festival artists.

‘Variety nights are an important part of building a Fringe community – they nurture camaraderie among artists and create a bridge between artists and audience.  And they’re a place for people to go after they’ve seen other festival shows that evening and want to kick back in a less formal, equally entertaining, setting,’ said Daley.

The weekly revelries will culminate in an epic closing night.

‘We’ll have the biggest, brassiest musical acts on that night so that everyone is up and dancing by the end and the Fringe goes out with a bang,’ said Daley. ‘We want ALL the Fringe artists and audiences to come down, kick up their heels, and celebrate a festival well done!’

To join in the action come to Eliza’s Juke Joint at 5 Eliza St Newtown each Sunday of the Fringe from 7pm.

A comprehensive guide to programmed events is also available on the website. Events can be searched for through genre, location, venue or date.

Melanie Sano is an ArtsHub writer.