The Contemporary Sculptors Association, with their Yarra Sculpture Gallery, celebrate two decades of activity in a group show featuring work by past and present committee members.
Richard Watts
[This is archived content and may not display in the originally intended format.] 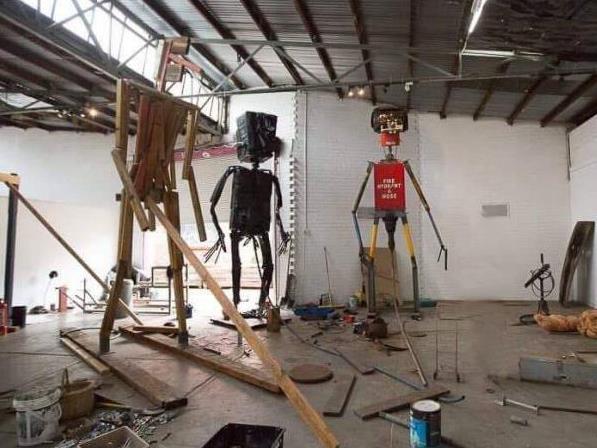 Over its 20 years to date, Yarra Sculpture Gallery – located in a former factory in Abbotsford, in inner city Melbourne – has supported contemporary sculpture in all its forms since 1997.

‘I think this space gives freedom to a lot of different sculptors. It’s a huge old factory with a  massive roller-door enabling easy access, so artists can easily bring in large scale works and materials,’ said Helen Braun, Chair of the Contemporary Sculptors Association, which has managed the Gallery since its inception in 1997.

‘We had a person in here recently who built great big figures from found objects, right up to the ceiling. They had to dissemble them to get them out again,’ she laughed, ‘but they could do it in this space.’

‘[Artists] can come in and make work here, explore the space, relate to and interact with the space and, often, they take away ideas that can be developed in other places,’ Braun said.

Yarra Sculpture Gallery was established in 1997 by Kate McCaughey, Gibson Carlyle, Emily Clark and Julie Collins and other enthusiastic sculptors who were concerned that the changing times had resulted in an entire generation of artists locked out of the commercial gallery system and unable to find affordable exhibition space.

The result was a space that is open and intimate, friendly and welcoming, where artists of all stripes can make and show great work.

Across its two decades of operation, the Gallery has not just outlasted other artist run spaces, it’s also endured as other sculptural initiatives have come and gone.

Artists exhibiting at Yarra Sculpture Gallery, including those selected for the anniversary show Twenty, running from 14 September – 1 October as part of the Melbourne Fringe Festival, have never had to worry about vandalism and the vagaries of Melbourne’s weather. Instead, the Gallery’s support, which includes artists’ residencies, mentorships and student showcases, frees them up to focus exclusively on developing their sculptural practice.

‘We’ve had lot of people go through here; some of them have gone on to be important public artists, other people have just kept to a small practice. It’s encouraged a great many artists to expand and explore,’ Braun said.

Along with its current members, many of the Gallery’s oldest members return for the annual group show, which runs from 26 October – 12 November.

Yarra Sculpture Gallery offers support to artists at every stage of their career, whether emerging, established or mid-career, as Braun herself can attest. A few years after graduating she was developing a body of work and looking for somewhere to show it. Braun soon found herself staging an exhibition in Gallery One. She also found a community.

‘What I needed, and what I think a lot of other artists need, is to connect with one another. For me, it’s been a wonderful way to meet, be with your peers and bounce off one another to see where you stand. It gives you great confidence too,’ she said.

‘This was our first year to have a graduate show with sculptors from three or four different tertiary institutions,’ Braun continued. ‘We hope this will be an on-going annual show, draw in new energy, draw in new connections and keep that tradition of strong sculptural practice going.

‘We also offer artists’ residencies– usually in the winter – and that’s a good chance for people who need a space to work in, to move around in, a room to stretch out and make a bit of a mess,’ she added.

Sculptural trends come and go, but Yarra Sculpture Gallery, with their ongoing management, and support from the City of Yarra, endures.

‘You have your ups and downs, what’s really popular, what’s not. I think it’s coming around again to something more solid with sculpture as well as installation and ephemeral works – we can pull it all together in this gallery and I think that’s what makes it really unique,’ Braun concluded.