The city’s performing arts centre is rethinking what it is to open up new artforms and spaces.
Anthony Morris 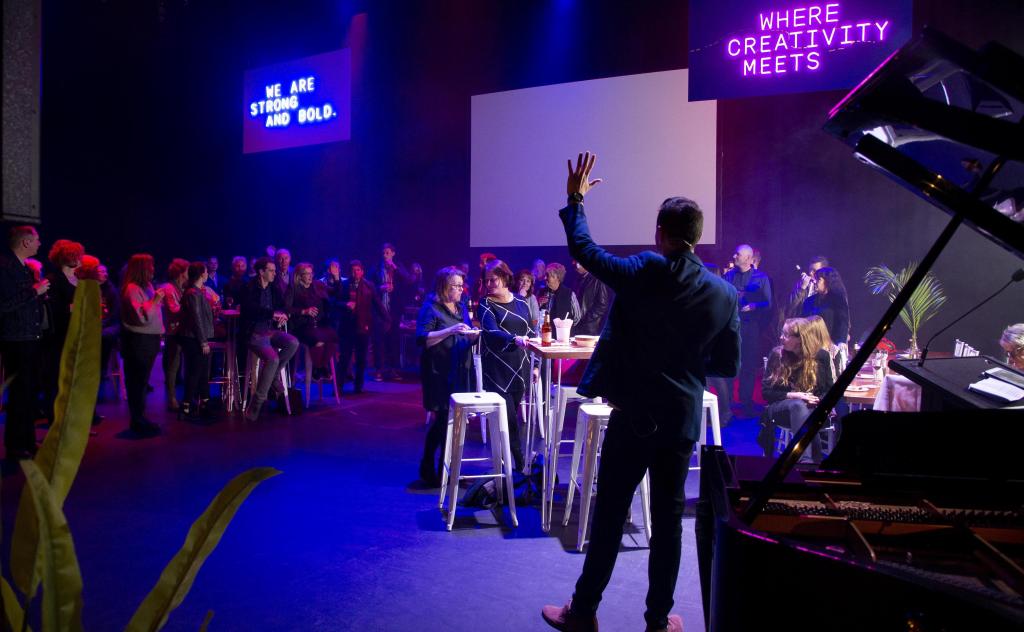 After 38 years, Geelong’s home of the performing arts has a new name and a new approach to the arts.

It will become the Geelong Arts Centre, to coincide with the opening in November of the Ryrie Street Redevelopment. This is the first in a series of major expansions taking place at the former Geelong Performing Arts Centre over the next few years.

CEO Joel McGuiness told ArtsHub, ‘We just saw the rebranding as a really exciting opportunity to let the arts community know that we are expanding what we do and that we’re into a creative practice that’s broader than just the performing arts.’

The new brand capitalises on Geelong’s designation as an UNESCO International City of Design in 2017 and the City of Greater Geelong’s recent release of the Our Future strategy built around a vision of a clever and creative city.

For McGuiness it’s about reflecting the changing face of the city itself. ‘We’re a vision partner with that [strategy], and we really feel there’s a brand within the region that our expansion can help develop’, says McGuiness. ‘There’s some incredibly talented people in and around Geelong and the region, and there’s absolutely an opportunity with the changing demographic that we’re seeing here.’

Much of that changing demographic is coming from the rapid growth throughout the region. ‘I think there was something like seven thousand people who moved to Geelong from Melbourne in the last financial year, and then there was around 600 people a month moving here from elsewhere,’ says McGuiness. ‘I feel it’s a critical mass that’s happening now, and that gives us an opportunity to diversify our program.’

McGuiness is inspired by the new spaces. ‘We’ll have everything from a 30-person studio right up to an 800-seater proscenium arch theatre, we’ll have a new church cabaret space, there’s going to be a really broad variety of different performance spaces here.’

There’s also a new emphasis on spaces for artists to develop their work and work together. ‘We’ve got a whole floor going into our new building to support the creative industries,’ McGuiness said. ‘It’s a co-working space and collaboration space.’

As well as being an incubator for new talent in co-working spaces, the Geelong Arts Centre will build on GPAC’s strong reputation for touring programs and expand into previously under-served areas.

‘There’s an opportunity for more fringe-style programming,’ says McGuiness. ‘Cabaret, circus – just different kinds of artforms that we haven’t had the opportunity to program in the same way. And the reason we’ll be able to do that is because we’ll have smaller spaces.

‘So for example, Studio 4, which is about to open, will have a capacity of around 120 people, it’s a really beautiful space to test new work, to develop new audiences and for both emerging and professional companies to try a new work out.’

McGuiness says that developing up-and-coming artists will also be a major aspect of GAC’s new direction.

‘We haven’t been set up before in a way where we can provide facilities and professional development opportunities and help co-commission work. We’re already offering two grants of ten thousand dollars called Curious Mechanics, and that’s to support Geelong and regionally based artists. They’re going to come into this space, they’re going to rehearse the work, and then we’re going to have a public showing of the work, all from our new spaces.’

Changing direction towards a new vision

The new look and branding for Geelong Arts Centre was driven by internationally recognised brand and design agency The Contenders. It was the result of extensive research and consultation, held in conjunction with the centre’s trust, staff and customers over a three-year period.

‘Really, what the rebrand is about, is “How do we let the rest of the world know that we are set up in a new way, and we’re expanding what we’re doing”,’ McGuiness said. ‘These changes are really just in response to what we see that our arts community needs and wants from an arts centre.’

With the region’s rapid growth, that response is increasingly focused on reflecting a growing diversity.

While the rebranding signals a new era for the arts in Geelong, the changes at GAC are far from finished.

‘Stage 3 of our redevelopment is fully funded, and we’re about to go into the design phase,’ says McGuiness. ‘So that’s part of why we’re talking about change when it comes to the rebranding, there’s so much change going on. This stage is about making spaces, then the next stage is about a really broad variety of performance spaces.

‘We’re going on a big journey of change.’