ENSEMBLE THEATRE: David Williamson's latest play examines the political and religious divides of contemporary Australia.
Lynne Lancaster
[This is archived content and may not display in the originally intended format.] 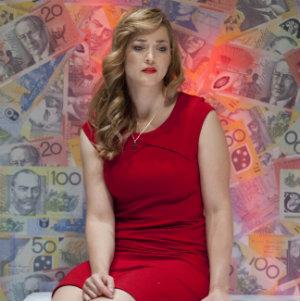 With the author himself in attendance on opening night, Sydney’s Ensemble Theatre brings us yet another scintillating work by David Williamson. Very well structured and flowing cinematically, biting and witty in short, sharp scenes, it features many caustic one liners and has the audience in fits of laughter at times.

When Dad Married Fury examines the political and religious divides of contemporary Australia. Director Sandra Bates has a fabulous cast to work with.

Hard-nosed older businessman Alan (Nick Tate) is rich. Extremely rich. How he made his oodles of money and survived the GFC, seemingly without caring about the suffering of those who were wiped out financially, is questionable , but as the main beneficiaries of his will, Ben (Jamie Oxenbould) and Ian (Warren Jones ) aren’t really going to examine their father’s ethics too closely.

Ben’s wife Laura (Di Adams) is a ‘lefty’ with major scruples. Her mother, Judy (Lorraine Bayly) lost her husband and all her money as a result of the GFC and Alan’s shady financial dealings. So Alan’s posh 70th birthday celebrations were always going to be rather fraught.

At his birthday party, Alan introduces his new wife, Fury (Cheree Cassidy) to his family and the fur flies – metaphorically speaking. Deep family fissures are revealed and secrets uncovered. More bombshells are dropped at the catastrophic party which is the climax of the first half.

As unscrupulous business mandarin Alan, Nick Tate is excellent. We can in some ways sympathise as he blames the Wall Street sharks for the financial fallout that followed. But why did he marry Fury and agree to no pre-nup? Does she really love him? Does he love her?

Fury (a stunning Cheree Cassidy) , an ex-beauty queen, is a wealthy business woman in her own right, running a very successful card design business. At first she tries to be pleasant to Alan’s family, and has a charming facade, but we gradually learn that she is a right wing Bible bashing fundamentalist, and vehemently anti-gay. However she does have a good, very moralistic side too, revealed when she discovers Alan’s financial shenanigans.

Exquisitely dressed Sue, Ian’s wife, is magnificently played by Lenore Smith. Hard and determined, she just wants what is right, which is for Ian to get his share of the mega-inheritance when appropriate. At first she is bitchy and totally anti-Fury but gradually she grows to know, understand, and even like her.

Catty lefty Laura (magnificently played by Di Adams) is almost diametrically opposed to Fury’s views, and has no qualms about ruining Alan’s birthday celebrations despite the other family members’ pleas. Williamson uses Laura as his voice to express his concern about various social justice issues. Both Laura and Sue have some devastating one liners about Fury before we meet her.

As Alan’s sons Ben and Ian, who want and expect a slice of the pie, Jamie Oxenbould and Warren Jones are excellent .We see the interfamily scheming, wheeling and dealing, the hidden jealousies.

I was most impressed by Marissa Dale-Johnson’s simple, rather minimalist set design, which features just a few multi-purpose chairs and tables and an all over, collage-like wallpaper design of Australian currency to almost Pointillist effect. Peter Neufeld’s understated but very effective lighting compliments it well.

A scintillating play, full of wicked barbs, that raises some thought-provoking issues about the current state of Australian society.