This triple bill of abstract works stretches the audience members’ minds and the dancers’ bodies.
Deborah Stone
[This is archived content and may not display in the originally intended format.] 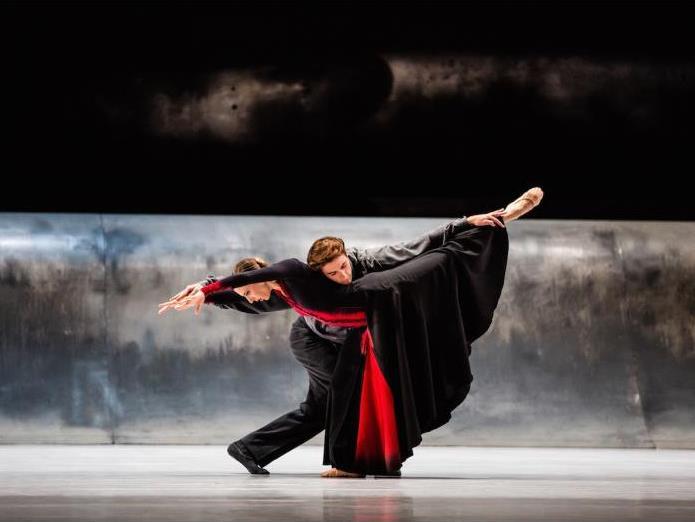 The three works that make up Vitesse can be characterised together by what they are not: narrative, traditional or pretty.

But while each is an abstract, contemporary work that is conceptual in construction, their similarities are superficial. Both the mo​od and the modes of expression are fundamentally different in each of the three pieces.

The program begins with the graceful and aesthetically accessible work of much-loved choreographer Jiří Kylián, Forgotten Land: an achingly beautiful work of deep emotion in which movement, music and light work together to reward the senses.

This is a work that can be taken at face value, enjoyed for its depth of feeling and athletic grace, the flowing movements set against sounds of breath, wind and the evocative score of Benjamin Britten’s Sinfonia de Requium.

But it is highly recommended that audiences avail themselves of the program, read Valerie Lawson’s explanatory article and in particular look at the striking Munch painting which inspired Kylián. The Dance of Life focuses on three images of the same women, a young woman in white, a red-clad woman dancing with a man and an old woman in black. Behind her, three other couples dance, apparently oblivious.

In Kylián’s interpretation, there are six couples – three primary and three secondary – expressing different stages of life and love in a work that is never sentimental but is powerfully romantic.

The dancers of the Australian Ballet bring fabulous chemistry to these intimate encounters, enhanced by rich flowing costumes by John Macfarlane, who also produced the simple set, a stage for Kylián’s stunning original lighting concept.

From Kylián, we move to the more difficult work of William Forsythe, In the Middle, Somewhat Elevated. The title appears to refer to the two golden cherries that hang in the centre of the empty stage which are said to represent the mirrors of the Paris Opera – though it is an opaque reference that seems more surreal challenge than homage.

Below this odd decoration, the dancers work through a series of extended exercises that challenge and extend the language of ballet. It is an intellectual exercise, often powerfully impressive in its physical demands and exacting execution. But it is cold, especially against the pounding unrelenting Thom Willems score.

Vitesse, French for ‘speed’, takes its name for the final work: DGV: Danse à Grande Vitesse, an expressive and satisfying ballet that premiers with the Australian Ballet in this Melbourne season.

The ballet, created 10 years ago, is set to MGV: Musique à Grande Vitesse, a stirring composition by Michael Nyman created to celebrate the inauguration of the French TGV (Train a Grand à Vitesse) in 1993.

Choreographer Christopher Wheelan has created a truly contemporary work which captures the speed and power of technology, the sense and power of space without ever devolving into clichés of the industrial aesthetic.

DGV has both dynamic range and emotional power – proving that with enough skill one can make engaging art about just about anything. Against sculpted sheets of steel designed by Jean-Marc Puissant a large corps de ballets moves through an impressive range of movement and expression while four pas de deux express different aspects of travel: romance, speed, danger and technology.

The work is nicely balanced between the conceptual and the literal, providing occasional narrative elements but giving a fluid overall experience of the concept of the journey.

The soloist couples each create an impressive and distinctive energy, executing some astonishing fast moves and high lifts with virtuosity but without losing the emotional heart of the work.

Vitesse is a program which will appeal to the more sophisticated and experienced end of the ballet audience, those who care more for movement than for tutus and whose intellectual engagement will be rewarded with a rich program that engages mind constantly and heart often.

Rating: four stars out of five