VICTORIAN OPERA: Julius Caesar tells of the Roman leader's arrival in Egypt, fresh from victory over his rival, Pompeo. Cleopatra seduces Caesar into joining her against Tolomeo, her brother and co-ruler of Egypt.
Patricia Maunder 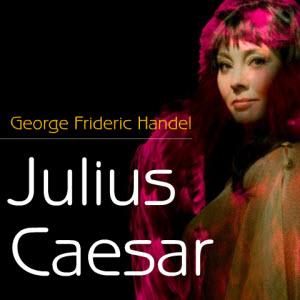 Comparisons with the Victorian Opera’s first fully-fledged outing at the Melbourne Recital Centre a year ago are inevitable. Xerxes was a brave and ultimately triumphant venture, the intimate space and sublime acoustics perfectly suited to the baroque style.

This second outing – another Handel opera, Julius Caesar – shows that lessons have been learned from that bold experiment, particularly the improvement in dulling the sound of footfalls in a space where you can literally hear a pin drop. The limitations of lighting and other theatrical infrastructure in a hall designed for concerts have also been overcome to a greater degree, mostly through a ‘less-is-more’ approach that makes a virtue of dramatic simplicity.

The opposite attitude seemed to prevail with the choice of orchestra, as Orchestra Victoria is crammed in front of the stage. While performing with verve and precision under conductor Richard Gill (who also played harpsichord continuo), they were no better than specialist baroque chamber ensemble Accademia Arcadia, who arguably produced a finer, richer sound for Xerxes in 2009.

Julius Caesar tells of the Roman leader’s arrival in Egypt, fresh from victory over his rival, Pompeo. Cleopatra seduces Caesar into joining her against Tolomeo, her brother and co-ruler of Egypt. Meanwhile, Pompeo’s wife Cornelia is the reluctant romantic object of both Tolomeo (who has had her husband killed) and his general, Achilla. This raises the ire of her young son, Sesto, and the sympathy of Cleopatra.

In the title role young counter-tenor David Hansen makes a welcome return to Melbourne, where he was last seen in the Victorian Opera’s 2008 production of The Coronation of Poppea. He did not begin well, however: his first aria, Verro alla reggia, was quite mechanical, albeit technically solid. By the second act, however, Hansen hit his stride. In the divine aria Guidami tosto, he delivered coloratura flair while confidently mingling with the orchestra and charming the audience.

The rest of the small cast were also generally good: the warm mezzo of Tania Ferris (Cornelia) was particularly impressive, as was Jessica Aszodi in the pants role of Sesto. While her interpretation of an angry young man wasn’t convincing, her pure, agile soprano was delightful (other than a propensity to shout for passionate effect early on).

Someone behind the scenes deserves as much credit as anyone on stage for this Julius Caesar‘s success. Making an extraordinary directorial debut, in an unfamiliar artform no less, is former Australian Ballet principal dancer Steven Heathcote. His performers move with purpose and grace, adding simple, elegant dance moves occasionally to excellent effect.

This works well against Stephen Curtis’s restrained set: little more than a white obelisk and obscured sweep of stairs contrasting with a floor-to-ceiling red silk curtain that is dramatically swept through and around the set. In Act 2 Cleopatra’s striking train of turquoise silk is quite hypnotic in the hands of three dancers who play servants or soldiers throughout the performance (Caesar literally swoons in that seductive silk’s embrace!), while Act 3’s length of black silk shrouds the scene and, ultimately, the villain Tolomeo.

The assured, gracious restraint of this production allows Handel’s music to shine – interpreted as it is by some fine performers, more often than not it positively shimmers.

Julius Caesar is sung in Italian with English translation at the Elisabeth Murdoch Hall, Melbourne Recital Centre, until 30 July. For bookings, phone the Recital Centre on (03) 9699 3333 or visit them online.