An exemplary exhibition, a distinctive local story in a dramatic local heritage site with outstanding collaborative artworks on themes of national and international significance.
Dr Peter Emmett
[This is archived content and may not display in the originally intended format.] 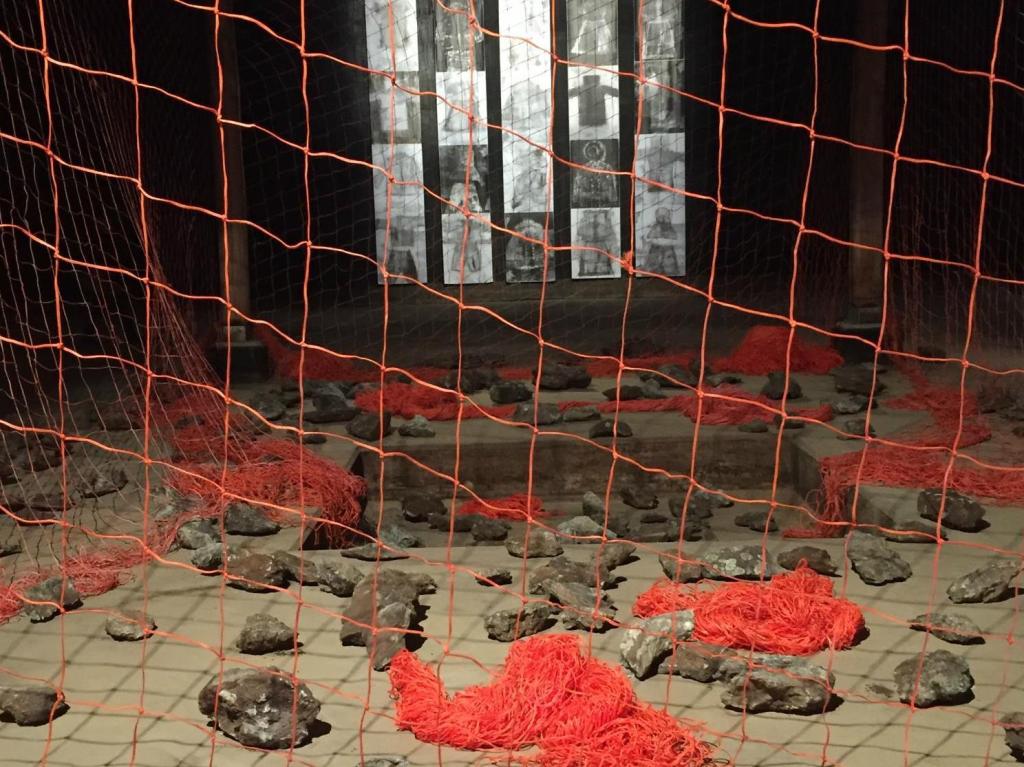 It’s a strange feeling walking through the bush of Georges Heights overlooking the site where three Japanese subs entered Sydney Harbour exactly 75 years before to the day! Also strange is this giant idiosyncratic building, part silo, part shed; deliberately ambiguous to camouflage its purpose as a wartime naval fuel tank. Now inside, first impressions are of vast blackness and roundness, scattered rocks, a giant net floats, images of submarines, gunfire and graves, watery reflections, ghostly fabrics and fleeting sounds. Are we under the harbour waters with those midget subs, in an eerie stage set for re-enactment, or immersed in a watery dreamscape?  This is an art installation of remarkable resonances – of place, space, story and senses.

Despite the sensational subtitle ‘the Battle of Sydney Harbour’, the individual artworks and their holistic installation seduces one into an intimate rapprochement between Australians and Japanese today.

Ken Done’s Attack provides the overarching narrative for the exhibition. His series of 15 large-scale paintings follow the trajectory of the Japanese submariners from their homeland to Sydney Harbour in May 1942, the ensuing misadventures, battle, death, recovery and their military funeral service. Done’s characteristically exuberant paintings are like a giant Japanese graphic novel, juxtaposing plots and subplots from above, below and around the harbour in that fateful week.

Sue Pedley’s Orange-Net-Work also plays a pivotal role as a powerful central focus and symbol for the exhibition. The giant orange net floats above an installation of rocks, an obvious reference to the anti-submarine harbour net which existed immediately below the fuel tank. But Pedley’s net has a more nuanced Japanese connection. It’s a nori net made in collaboration with a fishing community on the island of Teshima.

Nearby a series of giant paper scrolls hang from the tank walls, made up of a grid of frottages, rubbings of clothes from the abandoned house on Teshima and naval uniforms from a historic collection in Sydney, including a Japanese submariner’s jacket, on sounding maps of Sydney Harbour and the Seto Inland Sea. These beautiful paper works evoke the sense of movement across time and space, the overlays and erasures of meetings and memory. Collaboration is the essence of Pedley’s art practice, manifest in her collaboration here with artist Gary Warner.

Miku Sato uses the art of gestures to draw other connections between Australia and Japan in her video work Not the Yellow Submarine. Two young men the same age as the youngest submariner, share a parallel universe. One in Sydney draws subs in the sand which are constantly erased by the waters edge. The other enters and emerges from the water of Yokohama Harbour, Sato’s hometown where the submariners’ ashes were returned. Sato’s haunting seascapes are given greater abstraction through textured striations of the tank wall.

Periodically the space is punctured by dramatic music of clanging steel and rhythmic drums as Jennie Feyen’s video work returns. Sakura and Steel references the description of the submarines as ‘steel coffins’ and to the cherry blossom (sakura) scattered by Lt Matsuo’s mother on the water where his body was recovered. Story and mood is evoked through dance and film in what Feyen calls her ‘visual poem’. Dancer Kei Ikeda displays powerful emotions of entrapment and renewal, with dramatic close focus on her facial expressions magnified in the vast space. This collaboration of filmmaker, dancer, cinematographer and composer is a profound act of reconciliation.

Opposite is an eerie installation of 75 white fabric forms hanging in the blackened space. Michelle Bonjiorno’s A Thousand Stitches of Hope is a remarkable collaborative art project that evolved from her intimate connection to Taylors Bay near her art studio and home. It was here that a Senninbari belt, a good luck amulet given to loved ones departing for war, was found on Lt Matsuo when he died in his submarine. It was sent to his mother who responded with a series of poems acknowledging sacrifice and loss on both sides of the conflict. This extraordinary act of reconciliation is the master stitch for Belgiorno’s collaborative work of 75 fabric belts made by Japanese and Australian women in a series of sewing workshops where the communal act of stitching and talking interwove stories, lives and friendships.

There are so many resonances like this in Tokkotai – sounds of clanging steel, images of floating cherry blossom, flickers of light, ripples of water, stitches, rubbings, imprints and erasures – so many soundings resounding like a giant echo-chamber where all senses, thoughts and feelings resonate and reverberate. Often such a layered themed group exhibition can become overwhelming with so many signs, symbols and mixed metaphors that meaning becomes dispersed and dissipated. This is certainly not the experience with this exhibition. On the contrary, the many images and impressions seem to reverberate in physical and mental space, folding back on each other to create a remarkably full experience.

This quality of fullness no doubt comes from the powerful space, black and circular, a sense of containment and return. But it mostly comes from the resonances between the artworks. It is a superb curation of one richly-layered installation based on great rapport between curator Katrina Cashman and the artists. This is an exemplary exhibition, a distinctive local story in a dramatic local heritage site with outstanding collaborative artworks on themes of national and international significance. It’s a wonderful thing when art can engage with a story of war, death and distrust to create feelings of healing, friendship and collaboration.

Dr Peter Emmett is a curator, historian, writer and interpreter of the meaning of sites, spaces and collections. His extensive experience over 30 years has developed a multi-skilled, multi-disciplinary approach to revealing the unique and enchanted quality of places and collections and the presentation of these in innovative and popular museum installations, temporary exhibitions, heritage places, urban renewal and public art projects. These include The Museum of Economic Botany, Adelaide, 2009, The Separate Prison, Port Arthur Historic Site 2008, Museum of Sydney on the site of first Government House 1995, Hyde Park Barracks Museum 1991.