MELBOURNE CABARET FESTIVAL: Based on his all too brief season at the Melbourne Cabaret Festival, 23 year old Toby Francis has a remarkable career ahead of him.
Richard Watts 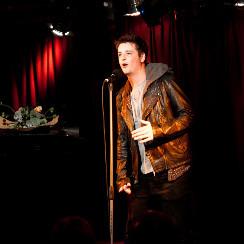 Judging from his short season at the Melbourne Cabaret Festival, 23 year old Toby Francis – the winner of Sydney’s 8th Annual Cabaret Showcase in December 2010 – has a remarkable career ahead of him.

Possessed of a powerful tenor voice – displayed to good advantage in a selection of songs ranging from rock numbers to showtunes – as well as excellent comic timing and a gently self-deprecating wit, there were times on Wednesday night when Francis definitely felt too large for the small Butterfly Club stage, despite being very new to the cabaret world.

His debut solo show, Blokelahoma! – directed by David Campbell and previously performed at the Adelaide Cabaret Festival in June – is an engaging exploration of what it means to be a man in a post-modern world, in which Francis discourses about everything from painful hair removal incidents to coming out as an atheist to his deeply religious family.

Impressing with both his emotional and vocal range, in a show that embraced bawdy comedy as well as heartfelt emotion, Francis was at his best when belting out such familiar numbers as ‘Oh What a Beautiful Morning’ from the 1943 Rogers and Hammerstein musical Oklahoma! and Jim Steinman’s rock epic, ‘Bat Out of Hell’.

A medley of Australian rock classics by such artists as The Angels, Divinyls, and Skyhooks also impressed, as did his poignant cover of Joe Jackson’s ‘Real Men’.

One or two minor stumbles served to remind audiences that Francis is still very new to the world of cabaret, but he quickly rose above them. Nor did he seem unsettled by the presence of his mother and grandmother in the audience, which might have inhibited less assured performers, especially in light of some of his more colourful material.

Accompanying Francis on piano and occasional backing vocals was the dextrous and versatile Andrew Worboys, whose deft performance added greatly to this already engaging production.

Keep an eye out for Toby Francis – this young man is going to be a star.

Rating: Three and a half stars