Shards of light and dark through the haze of climate change.
Elena Perse 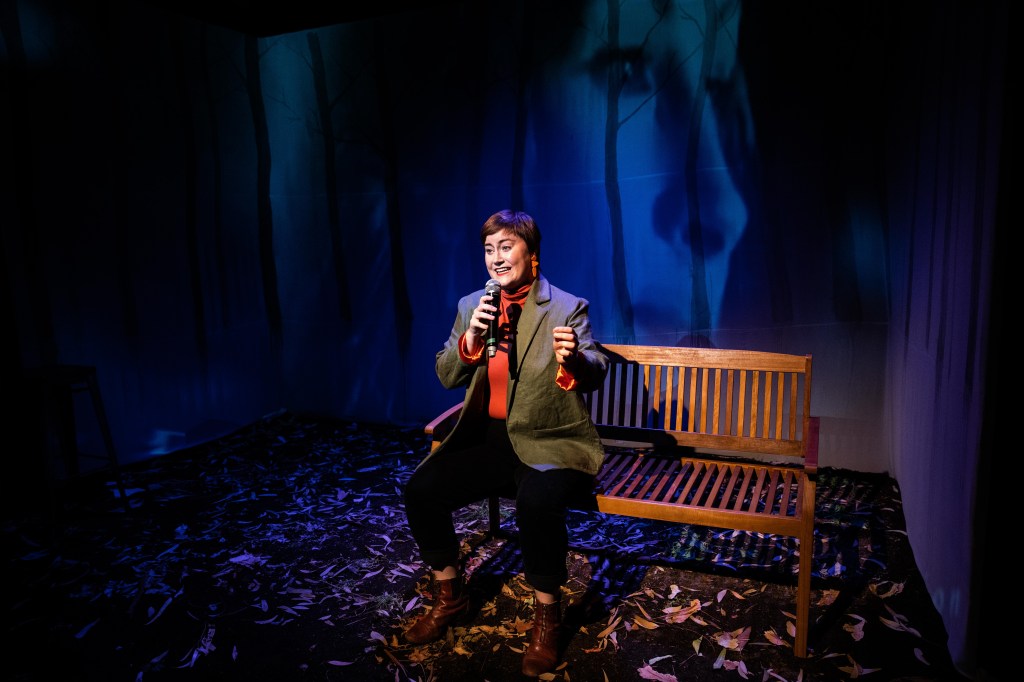 Part monologue, part stand-up comedy, and part emergency warning, Katie McAllister’s Watch and Act is hilarious and devastating in equal measures. Deftly jumping from subject to subject, in a 55-minute performance, McAllister manages to cover topics ranging from Notting Hill to gluten intolerance, her Year 10 performance as Lady Macbeth, her feelings on Tim Winton (which are complicated, to say the least) and more. Perfor

med at Perth’s intimate Blue Room Theatre, Watch and Act takes us on a meandering journey through McAllister’s thoughts, fears and fantasies. The audience follows her musings about a dream road trip through the Great Southern region of Western Australia. She imagines driving to Albany in an electric car, picking up Jacinda Ardern, Nigella Lawson, Julia Roberts and author of the Paris Agreement, Christiana Figueres. As McAllister daydreams about what she would discuss with these women and imagines the exact shade of their lipstick, a slow, romantic montage of their faces is projected behind her.

The mood changes dramatically, though, as the performance is interspersed with actual emergency broadcasts that McAllister delivered during the Wooroloo bushfires that ravaged her childhood home, Denmark, earlier this year. The performance’s title is taken from McAllister’s warnings to those faced with the destructive reality of the fires. Watch and Act deals with the impending reality of climate change’s catastrophic impact. Throughout the performance, it is impossible to ignore the urgent need to take action.

The theme of climate change is woven through the entirety of Watch and Act, serving as a reminder that every day, in the back of our minds, we should remember that climate change is an alarming and rapidly approaching danger. McAllister ties this very real and present fear in with a discussion of her OCD symptoms. She parallels her attempts to cope with demands on her mental health with an urgent plea to the audience to take the climate crisis personally and do whatever we can to alleviate our individual role in climate change.

Watch and Act is beautifully delivered, with passion and heart. Despite what may seem like quite heavy subject matter, McAllister successfully maintains an optimistic and upbeat atmosphere. The performance also uses sound, lighting and set design to great effect. McAllister’s imaginary discussions with Nigella, Julia, Jacinda and Christiana are voiced with soundbites from the women themselves. Watch and Act is predominantly performed against a projection of Denmark Karri trees on a stage scattered with sticks and leaves brought all the way from Albany. Smoke hangs hazy in the air, a stark reminder that bushfire season is almost upon us again.

Throughout Watch and Act, Katie McAllister adeptly balances light and dark in a heartfelt and genuine performance. She ultimately leaves her audience with the tools they need to tackle the climate crisis: hope, and a recipe for Nigella Lawson’s (meat-free) sweet potato mac and cheese.