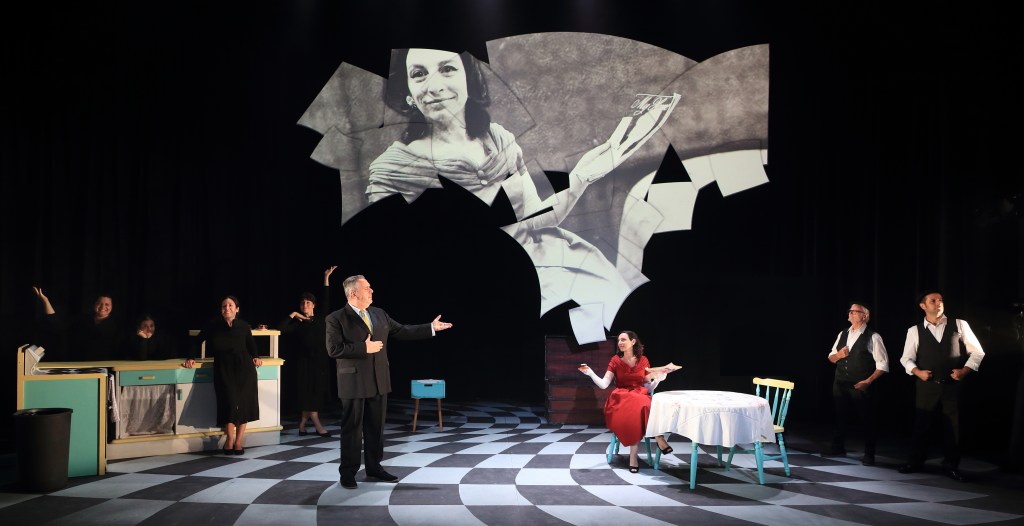 La Bella Figura was written collaboratively by Kathryn Ash, Frank Dangelico and Roz Pappalardo, with two of the writers also featuring in the lead roles. A lover’s tiff over a song starts off this raucous musical dramedy before we are introduced to Simona (Pappalardo), an independent third-generation Italian-Australian who is sitting in the kitchen of her Nonna’s farmhouse.

Maria (Dangelico) – the matriarch of the family – makes her appearance soon after, instantly endearing herself to the audience. The relationship between these two characters (three counting Nonno, also played by Dangelico) forms the bedrock for the unfolding story, as we are welcomed not only into this quaint kitchen but into the inner circle of a family that has loved and lost.

The featured struggles of family lore are freely shared with the audience, contextualising why Simona is hesitant to reveal to her grandparents a truth that she fears may ruin the reputation of the family. Pappalardo gives a tour-de-force performances, including vocally, while Dangelico brings a freshness to the JUTE stage, rocking both the frock and suit with conviction.

Augmenting the story further is a seven-member mixed chorus of singing and dancing performers, who were utilised to good effect by Director Suellen Maunder. Sprinkled throughout, Rubina Kimiia’s original musical interludes change the tempo and stretch time.

The set design by  JUTE’s resident designers Simone Tesorieri and Simona Cosentini is an inspired treat, using a silhouetted pile of photos as a giant projection surface suspended over the rear of the stage. This magnified focal point is Nathan Sibthorpe’s stage, where he expertly crafts together wallpaper patterns and photographs from across three generations, helping the audience to better understand the complexities of an immigrant family at once trapped yet empowered by a competitive culture.

Douglas Robins is an Arts worker in far north Queensland, is fanatical about theatre and believes theatre should always be inclusive to all. He completed a B.A. in Theatre and English at James Cook University, Cairns in 2011. An author of short plays and theatre reviews, an actor, director and president of community theatre company Tropical Arts Inc.