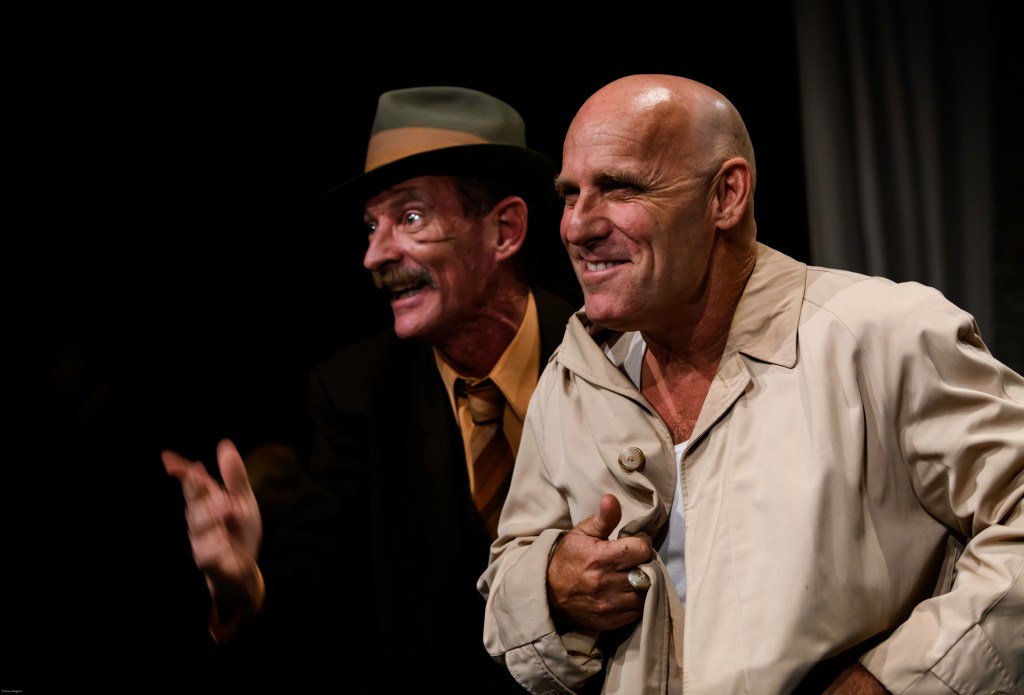 From the first moments, when this play opened to a piano vamp reminiscent of Kander-Ebb’s Cabaret, to the Hitler-esque speech in German to a backdrop of swastikas, this Australian adaption of Bertolt Brecht’s satirical parable was – in a word – spellbinding.

This production is the latest offering that adds yet another diamond to the lustre that is beginning to surround this truly remarkable, regionally-based company. It is powerful, evocative, and disturbing in its all too current parallels. But what is more important, is that for the first time I have seen Brecht’s ‘epic theatre’ make sense.

Epic theatre is of course not intended to be Lawrence of Arabia on stage – it instead uses a number of techniques (including the breaking of the fourth wall) to emphasise the audience’s perspectives and reactions to engage them into action. In this case, it was to donate after the show to Ukrainian refugees.

We are left in no doubt about this device from the start of the play, when Terri Brabon (evoking her best Marlene Dietrich), marches on to the stage to introduce the play and cast, à la Weimar cabaret. We hear for the first time original music – think Kurt Weill and Friedrich Hollander – which not only perfectly complements the action, but also reminds us of where we are and what we are seeing.

What unfolds is a version of this 1941 parable play, just as powerful and disturbing as the one where Brecht wrote expressly to destroy the dangerous respect commonly felt for great killers.

Of course, a contemporary audience is not necessarily familiar with the references to then recent history about the rise of Hitler and the Nazi party in 1920s/30s Germany, but now – some 89 years later – the disturbing parallels are blindingly obvious.

Indeed, we are all acutely aware of the parallels between Hitler’s invasion of Poland in 1939 and Putin’s invasion of Ukraine, but it is not too difficult to see elements of that every dictator and/or autocrat that has existed since Stalin, Amin, Mugabe and Ceaușescu… are names that spring to mind. Equally disturbing, and much more close to home, is the polarisation and the ‘if you’re not with you’re against me’ notion, that seems to be intruding into contemporary politics.

This threat to modern democracy is part of the stinging message. Brabon combats this assumed lack of knowledge of history with stark between-scene reminders via projections of contemporary 1930s news headlines and news photographs that constantly link the play to the rise of Hitler. To add an additional dimension to the production, Brabon has firmly set the play in 1930s Australian gangsterland.

Without stating it overtly – I understand the Brecht Foundation would not allow her to – there is very little reference to Australia, but the accent, idiom and language is quintessentially 21st century Aussie. However, the combination of the Australian setting, the German Weimar cabaret, exaggerated cartoon-style acting, and the constant reminders of the Hitler connection, only serve to reinforce the message that perhaps the themes are much closer to home.

In the past 11 years of its existence, the hallmark of all TheatreiNQ’s productions is its acting ensemble, customarily united, sharp and disciplined. The production was of course tight and pacey, expertly costumed and the exaggerated cartoon-like style of the piece allowed the cast to give full rein to creating a number of memorable caricatures.

Of particular note were the moustachioed Michael Sams as Old Dogsborough (based on Paul von Hindenburg) and the bescarred Robert Street as Roma (based on Hitler’s lieutenant and potential rival Ernest Röhm). Also notable among the ensemble were vignettes from Paris Walsh, Keely Pronk and Ashleigh Dodson.

However, the centrepiece of the entire production was the pivotal role of Arturo Ui (aka Hitler) which clearly demanded extremes from the actor. The role has been played by some extraordinary actors, many of whom admitted that they never managed to come to grips with it. Not so in Brendan O’Connor’s portrayal.

The role demanded that he pivot on a coin to plumb every aspect of his experience and training to convey this complex role – a man we have come to know as the vilest of 20th century villains. Of course, we despise the character – after all we hate him before we have started – but we nevertheless see this man whine, wheedle, manipulate, threaten, berate, punish and finally orate.

O’Connor extracts and creates humour, but in an instant will convert it into something sharply sinister. Just as Hitler rose to power, we see Ui lie, cheat, kill, blackmail, burn, and manipulate man and system. We see him transform from a small-time hood into a chilling, charismatic orator.

This is a tour-de-force performance. The last scene of the production leaves the audience stunned and it is doubtless that O’Connor’s performance will remain in memory long after you have left the theatre, as will the M.C’s final line: ‘We must not allow history to repeat because the bitch that bore him is back on heat.’