A questioning survey on the contract and compromises of a marriage.
Leila Lois 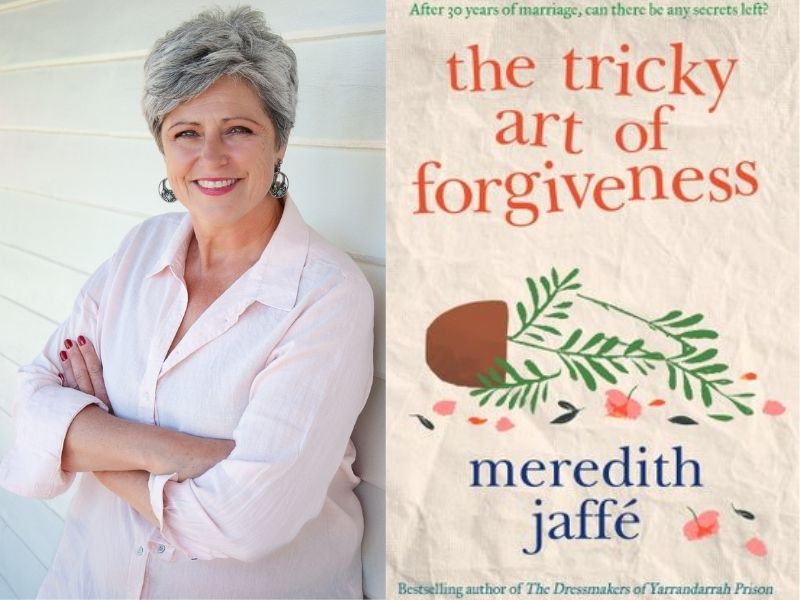 ‘This book is balanced in terms of hope and disappointment.’ Photo supplied.

If we really want to love, we must learn to forgive.

The Tricky Art of Forgiveness is a light novel with a heavy heart. With the narrative humming with passion and colour, Meredith Jaffé builds the story of two young lovers’ progress through the conventional stages of partnership, and settling down to make a family. When they become empty nesters, the change is a hard adjustment, especially for Diana who is left feeling insecure and empty at times.

Must we sacrifice to love, and learn to forgive? Will love always bring us pain, at some stage? Jaffé’s novel joins a profusion of novels recently that see female protagonists grappling with dated concepts of domesticity and expectation, keeping close company with writers such as Elizabeth Gilbert, Rachel Yoder and Kimberley Allsopp.

The Tricky Art of Forgiveness resonates with ‘is this it?’ kind of moments, where Diana is forced to look at her life, everything she has invested her love and years in, and consider that maybe things aren’t as perfect and she isn’t as content as would outwardly appear.

We’ve all had those moments, some of us a few times in a lifetime, and the skill of Jaffé’s writing lies in her way of depicting slow, crumbling, internal crises in the characters, and eliciting pathos.

Though essentially a ‘light read’, the themes of the novel strike a deeper chord and gesture to a place we all may have been before and offer comfort if we find ourselves there again. Where do we turn when ‘things fall apart’, as we stand on the precipice of a new phase of life, potentially alone?

The central drama starts as Diana is unpacking in a new apartment by the coast that she and Will have downsized to. It is just before their 30th wedding anniversary event and upon unpacking, she finds a note in her husband’s cashmere jumper. In cursive handwriting are the words: ‘I forgive you’. From there, Diana is left to put together the pieces of his deception and decide what to do about it.

Over the ensuing pages, flashbacks to happier and more desperate times unfold, as we are given an intimate window into the marriage, the bliss at the beginning, the betrayals in parts and the struggle against all odds to stay together, to see it through.

The character of Diana presents as naively optimistic at times, yet full of self-doubt at others. Her inner dialogue of fear of change is an undertone that many readers could relate to, like the famous Fleetwood Mac song, the discovery of the note seems to provoke a ‘landslide’ that causes much soul searching, seeing one’s reflection in the mirror and considering what one should do.

The path of least resistance would be to stay in denial, to keep quiet, lying to oneself as well as to one’s partner about issues in the relationship. Yet we are invited to believe that the consequences of this could be more damaging than airing the dirty laundry. ‘Everybody has a secret’ is the title of the first chapter and this sentiment rings true in Jaffé’s fiction.

Will’s notable absence for most of the novel (and large parts of their married life, due to his jet-setting career), is palpable. How can Diana not help but feel resentful about the domestic life she was backed into as the principal homemaker and caregiver? Her rock ‘n roll lifestyle as a young musician before they married and had children is depicted in the beginning of the book. Will’s jealousy showed some of the signs of what we might now call ‘coercive control’ to make her leave that life behind to become solely a housewife.

We start to wonder how much of this life path that Will and Diana chose together was desired, and how much was a result of societal expectation and economic necessity. That is not to say that the love and attachment between them isn’t skilfully portrayed, just that Jaffé depicts denial so well.

Throughout the marriage there were times where self-sacrifice and forgiveness occurred but the overall theme is perhaps one of self-forgiveness, the ‘trickiest art of all’, as the characters have to truly reckon with who they are and what they value, perhaps 30 years too late.

This book is balanced in terms of hope and disappointment and while not deeply profound, it could be a source of solace as well as just amusement for anyone (which is everyone) who has ever suffered heart ache and wondered about the life they have built and asked ‘is this it?’