Parallelisms explored between plagues past and present, and the shift between the Dark Ages and the Enlightenment.
Vanessa Francesca 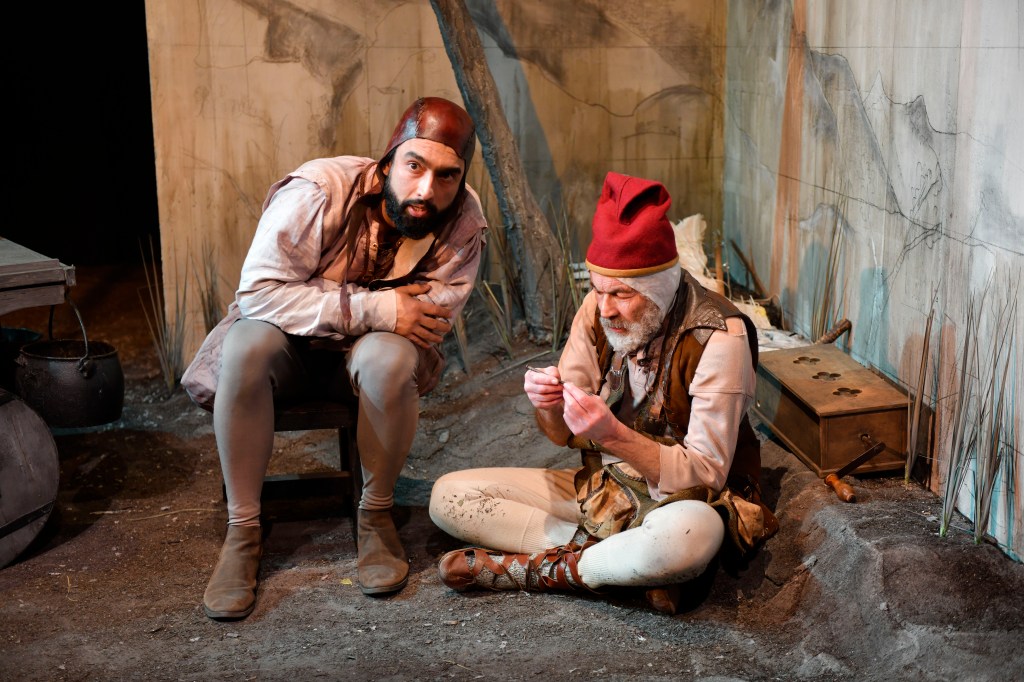 The Amateurs has both contemporary meta-fiction and historical parable in its sights. Photo: Jodie Hutchinson.

One virtue of Melbourne stages being so far away from the centres of world theatre is that once a production makes its way over here, it’s been on a long journey and had more than one chance to become the best version of a production that it can. This is especially true of Jordan Harrison’s The Amateurs, which under the keen directorial eye of Susie Dee, has made its way from New York off-Broadway at the beginning of the pandemic to Red Stitch Actors’ Theatre. And through its journey of creation, it tells the story of the birth of individual consciousness.

Harrison’s play is an apposite production for a contemporary post-pandemic audience. The setting is 14th-century Italy during the Black Plague, when a group of players are trying to outrun their own pandemic by travelling from city state to city state, praying for endorsement from the Duke. The players are like the rustics of A Midsummer Nights’ Dream, though they stage morality plays rather than Greek drama. Their attempt to follow their lines faithfully and not imbue their Biblical archetypes with their human struggles is the subject of much tension, comedy, and pathos.

But it is precisely the human struggle that writer Harrison, and on his behalf, director Dee are interested in. One character loses a brother to the pandemic, never to realise his true sexual identity, even after his lover also dies. Another becomes unexpectedly pregnant, and prays for a boy. A third places his hopes in creating the best play possible in order to find shelter at the Duke’s palace and pass the pandemic in safety. It is when these hopes unravel and death visits the players that we are able to move beyond the conventional roles and responsibilities signified by the morality play and towards a contemporary mode of drama.

The actor who plays the production’s mentally impaired set designer doubles as a hip Brooklyn playwright and he emerges from the fourth wall and adds a new dimension to the play.

The source of the drama in The Amateurs is the conflict between Hollis, recently bereaved of her brother, and the director, Larking. Larking wants to stage a perfect play to ensure the players shelter from the plague. Hollis wants to ask questions about the motivations of her character: Why does she do the things she does? How does she feel about her life and her choices? When she plays Noah’s wife in the morality play, why does she refuse to get on the ark? This results in some great comedy between Larking and Hollis but it also paves the way for the play’s philosophical sophistication.

When Hollis asks questions of her character, the director argues in a witty monologue that we are seeing the end of a society based on roles and the common good, and the beginning of a society based on individual consciousness. We are seeing the end of the Medieval and the birth of the Renaissance. We are also seeing, by the way, a foreshadowing of the method acting technique. A 14th-century morality play suddenly becomes modern before our very eyes.

This philosophically sophisticated insight achieved, the scene returns to the Dark Ages and the morality play is resolved in a satisfying way. It is helped along by fantastic acting from all cast members including Emily Goddard, whose performance in the beginning anticipates the themes of the play, and Dion Mills, whose ending gives the play its pathos. With a beautiful set along the minimalist lines of Yentl and costumes with the bold touch applied to Ghetto Cabaret, Dann Barber’s design supports a very stylish production.

Although we get a beautifully curated range of productions in Melbourne, the opportunity to engage with plays beyond the contemporary often passes us by. The Amateurs is a work that has both contemporary meta-fiction and historical parable in its sights and shows us the possibility of connecting to a history of pandemics and post-pandemics in the most meaningful possible way.

The Amateurs will be performed until 24 July 2022