Cabaret production does not have its sea legs.
Thuy On 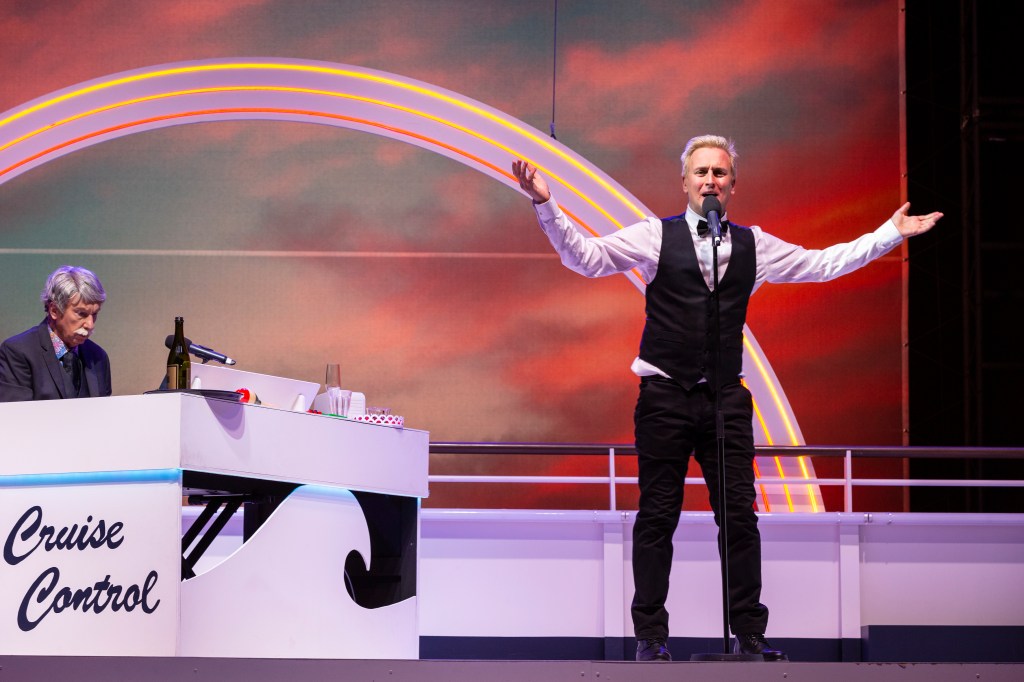 Will Conyers and Ash Flanders aboard the SS Metaphor. Photo by Pia Johnson.

You’d have to be pretty optimistic to plan a production en plein air considering Melbourne’s capricious weather, even in Summer. But SS Metaphor was written specifically  for the Malthouse’s Outdoor Stage and on opening night, the gods were merciful; it was cold but not wet. Under pretty strings of lights overhead, sets of tables sitting six each were assembled around the stage. We could possibly have imagined we were on deck as guests, exposed to the elements and waiting for the cruise ship’s program of distractions. Still, it was hard to reconcile ditties saying that it was ‘HOT HOT HOT’ when one was doing up the top button of a heavyset coat.

The alliterative publicity material promised a ‘medley of maritime mayhem’ upon the SS Metaphor, the luxury cruise liner aboard which writer-performer Ash Flanders and his motley crew are stranded.

The farce seems to be strung together by an assortment of untidy, ill-fitting  elements, none of which cohered to a pleasing whole. Theatre as anarchy is fair enough a proposal should the production have charm. Unfortunately there was not a scintilla of evidence of such here either. Note to the creators and creatives: throwing together disparate ideas around tired old show tunes, hammy acting, silly costumes and wigs, double entendres, puns and fart and vomit jokes do not for entertainment make. It’s more cringe-worthy than funny.

For some reason that is never really explained, (at a stretch you can draw parallels to Melbourne’s extended COVID lockdowns) the SS Metaphor has been in the same spot for over a year. It’s not going anywhere and sadly, neither are we. Instead we are subjected to the sozzled, glammed up hostess Susie (Natalie Gamsu) and her piano accompanist Harold (Will Conyers) as they go through rounds of banter interspersed with snippets of cabaret song. Elsewhere in the show, Shakespeare and Disney shows are mangled. There is an earnest environmentalist, Jan (Zenya Carmelotti) who is studying microplastics in the ocean and keeps warning everyone about a Giant Pacific Garbage Patch the ship is in danger of colliding into. Also on board are some vigilantes who are apparently campaigning for better pay and conditions. Gunshots are fired; songs are murdered.

Without a string of coherence to keep the muddled narrative afloat and lacking directorial nous, this SS Metaphor (cue groanworthy gags about mixed and loose varieties) is completely lost.

There is no innovation, just lazy and corny uni revue style end-of-year antics that do a disservice to all involved. It’s a pity given the collective talent of cast and crew.

SS Metaphor will be performed until 19 December 2021