An unlikely hero, Shrek is a solitary ogre abandoned by his parents when he was seven but, underneath the gruff exterior, there beats a heart of gold.
Suzannah Conway 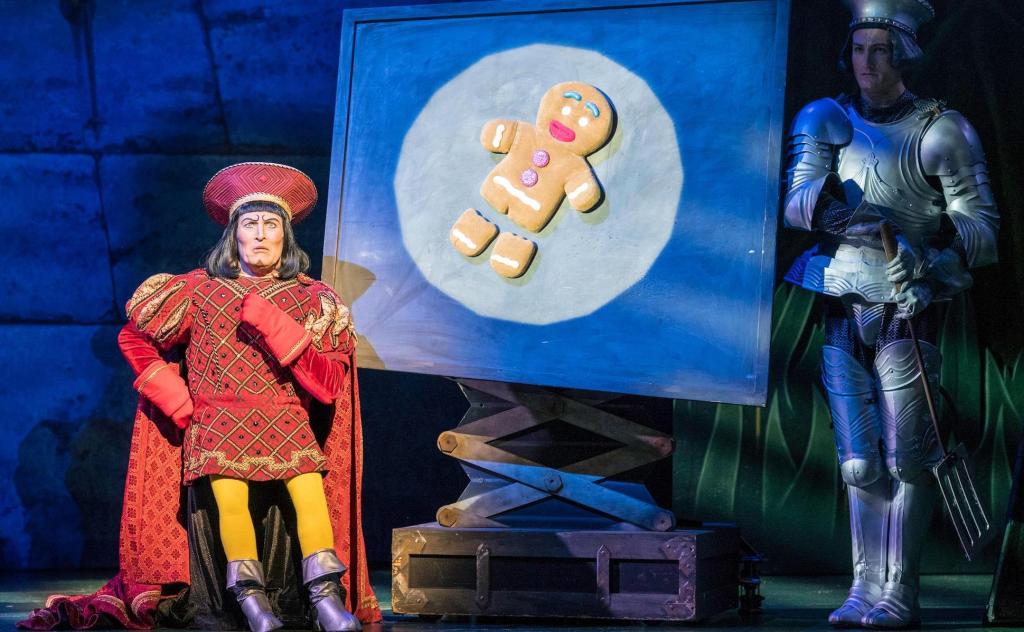 Todd McKenney as Lord Farquaad in The 2020 season of Shrek The Musical. Photo by Brian Geach.

Shrek the Musical enjoyed seasons in both Sydney and Melbourne in early 2020 but then Covid hit. Theatres were closed and its May season in Brisbane was postponed. Due to open for a short season this January, a further delay was experienced with the 3-day lockdown in Brisbane last weekend.

Finally, and after much anticipation, Shrek the Musical has opened with a 50% capacity house, rather than the 100% anticipated. Nevertheless, it is a welcome addition to QPAC’s program for the start of 2021 and is exactly the sort of heart-warming fairy tale story with the ‘happily ever after ending’ that is needed at this time.

Cleverly, as in the Shrek movie, the story weaves a number of beloved fairy tales and characters into the mix, with the ensemble playing a cast of characters including Pinocchio, Peter Pan, Red Riding Hood, Wicked Witch, Fairy Godmother, Ugly Duckling Pied Piper, the Three Bears and the Three Little pigs, among others.  There is even an opinionated Gingerbread biscuit, and various puppets, including the Dragon, Puss in Boots and the Cow jumping over the moon.

An unlikely hero, Shrek is a solitary ogre abandoned by his parents when he was seven but, underneath the gruff exterior, there beats a heart of gold. Despite being initially treated scornfully by Shrek, side-kick, Donkey provides support as well as comic relief. Heroine, Princess Fiona, incarcerated in a tower guarded by a fierce Dragon since she was seven, waits patiently to be rescued by a handsome prince, while Lord Farquaad, a narcissistic and vertically challenged villain, needs to marry a princess in order to become King. The mix produces a well-crafted traditional storyline as Shrek and Donkey undertake their quest to rescue the Princess and put the world to rights.

The book and the lyrics work well with some witty and interesting lines to please both adults and children.

The 2020 season of Shrek The Musical. Photo by Brian Geach.

The storyline has some strange non-sequiturs though and both Shrek’s escape from the Dragon and Farquaad’s demise, for example, were ill-explained visually. Musically the score is a pleasing pop-rock mix, however, due to the sound levels being overly loud, it was often difficult to distinguish lyrics.

There were some memorable songs nevertheless. Shrek’s Big Bright Beautiful World which opens and closes the show is terrific as is his heartfelt Who I’d Be. I Know It’s Today, showcasing the three different ages of the princess, was clever and beautifully delivered, including from the young Fiona, Freya Callaghan, who was charming. Fiona’s Morning Person proved to be a great vehicle for a first-rate tap-dancing sequence from the ensemble. And Fiona and Shrek’s ballad, This Is How A Dream Comes True, contrasted neatly with the musical highlight, I Think I Got You Beat.  Farquaad had excellent opportunities to display his scheming nature, including Welcome to Duloc and particularly The Ballad of Farquaad.

What makes this musical work is a great cast and excellent production values with splendid stage pictures, special effects and lighting, that were all technically first-rate, alongside an extraordinary assortment of dazzling costumes.

The opening book sequence, as the pages turned and heads appeared to set the scene for a ‘once upon a time’ story, was perfect. Shrek’s swamp, muddy and brown, had iridescent colourful paper flowers, while the dark green forest with its moving trees, also managed to show off the bridge crossing to the Dragon’s lair with its river of molten lava to great effect. Using primary colours for Farquaad’s castle, with its silver-clad guards and red and blue costumed inhabitants, was also spot on.

All the ensemble fairy tale characters were well portrayed and easy to identify, with Pinocchio having a nose that grew and the gingerbread biscuit a mouth that spoke. The huge Dragon puppet was an excellent addition, her song being sung with gusto and great aplomb by the inimitable Marcia Hines.

The ensemble was fantastic, playing a myriad of characters with great attention to detail and exemplary standards of singing and dancing.

Ben Mingay’s Shrek was a totally believable complex character; his ability to be tough and strong balanced by, his vulnerable emotional life. He gave an assured performance and it was a pleasure to listen to his beautiful and powerful voice. Nat Jobe looked the part of Donkey with his glorious costume, ears and hooves, but attempts at a southern American accent, imitating Eddie Murphy in the film, were garbled and indecipherable. Many of his comic lines were missed, which was a great pity.

As Princess Fiona, Lucy Durack was perfectly cast, the sweetness of her voice belying the toughness of the character. She sang wonderfully in both the ballads and the more comic and dramatic songs, while also impressing with her excellent tap-dancing skills.

Todd McKenney’s Lord Farquaad was a complete scene-stealer.  His was a perfectly realised, if over the top, character who used every ounce of his dialogue and songs to great effect. Rounding out the character into a delicious mix of pomposity, arrogance and cowardice, he impressively executed his shortness of stature with his fake legs.

This was not the greatest of musicals and but overall, it was a fun, enjoyable and immensely engaging production with marvellous production values and special effects. A great show for all the family to enjoy.

Shrek the Musical
Presented by QPAC in assoc. with The Gordon Frost Organisation
Based on the DreamWorks Animation Motion Picture
Lyric Theatre QPAC, Brisbane
22 January – 7 February 2021