A two-hander about navigating memory, trust and love.
Elroy Rosenberg 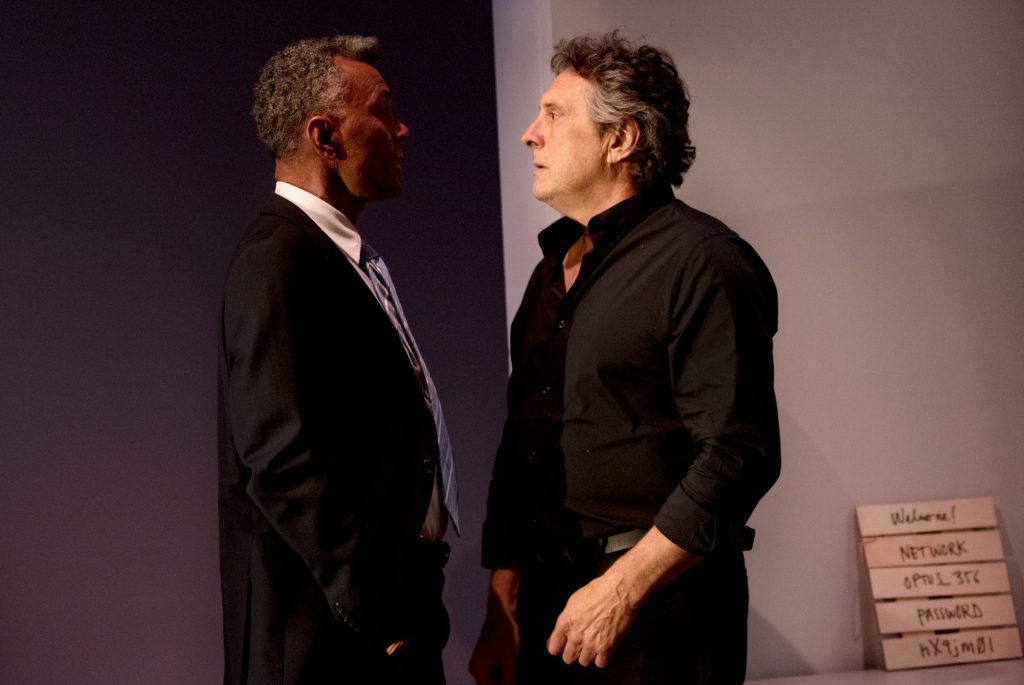 ‘Gardiner is skilled in laying out the premises of both characters, imbuing their interactions with a genuine longing and a dramatic frisson.’ Photo by Jodie Hutchinson.

Peterson (Patrick Williams) is a middle-aged man who, by all apparent measures, has achieved an undeniable degree of success: a wallet so thick it can’t bend, a wife and two children, a high-paying job, an art collection. Sucking on a vape-pen, he billows clouds of smoke out into the room, asserting his territorial control. He’s a self-actualiser, a winner.

Cantona (Joe Petruzzi), on the other hand, is a loser. Lonely, greying, desperate. He works in a restaurant, a menial service job from which he arrives home to eat cold, pre-prepared sandwiches for supper. Cantona has actualised only his lamentable servility, and it has bound him to an intractable spiritual sorrow.

That these two men share a repressed love for each other – love which flourished during their youth and which, for reasons unexplained, was left unratified – is the central dramatic axis of Prayer Machine, Eric Gardiner’s new play, developed and staged by Red Stitch. Gardiner centres us upon the meeting of these two men in the mire of their middle age, and from very early on the audience knows the game. Is the old flame still alive? Can people re-enact their own histories? Who wants who?

These are, to differing degrees, questions of power, of authority. As in, forgetting the past is a strength; clinging on to it is a burden, a weakness. Wanting itself is a weakness – the goal is to be wanted. The play’s opening scene serves to establish this dynamic. Where Cantona has been unable to fully exorcise his feelings toward Peterson and thus lives in a kind of nostalgic limbo, Peterson wishes to assert a dominance over his memories, to belittle them and Cantona, into non-existence. ‘You rent,’ he says mockingly to Cantona. ‘I own.’

In some senses, the play is a gradual whittling away of Peterson’s façade, a kind of lowering down from his pedestal, and the audience is with it all the way, mainly off the back of the performances from the two actors. Williams and Petruzzi are compelling; austere then tender, gruff then graceful. A wistful tragedy underscores their every moment together, given that idealism has, in different ways, broken them both. The trouble is, neither of them know it until the play’s final scene.

Gardiner is skilled in laying out the premises of both characters, imbuing their interactions with a genuine longing and a dramatic frisson. Adding to this psychological depth is the restrained and rather anodyne set which, when wedded to subtle, moment-to-moment gradations of lighting, activate a variform set of moods depending on the scene. It’s interesting and effective. But then, Red Stitch never disappoint in this facet; what they do with their boxy little performance space is always noteworthy.

Yet Gardiner, for all the compelling honesty that buttresses the drama of the play, becomes at times too insistent, so that there are certain moments within the play which you never really buy. For instance, some scenes feature a slight overlap in changeovers, so that when the lights go up, stage hands are still fixing the scene anew – even interacting with the actors on certain occasions. But it’s alienating, too academic, too clever, and ultimately adds nothing to the performance. A storyline about leaving for Japan, which seems an inauthentic desire for both characters, is also rather perplexing.

Then there’s the ending, which Gardiner can’t quite land. In the play’s final two scenes, all the emotional excavation of the prior hour is re-constructed, as if the previous scenes never happened. Gardiner, who to this point has unravelled the emotional burdens of both men, suddenly loses the thread, and re-starts the unravelling anew. The effect is alienating: the dramatic tension of the encounter has been exhausted, and the scenes fall into a mannered melodrama and redundancy. (‘I want you to see me,’ Cantona cries. ‘I want to be discovered.’ Yes – we knew this already.) Williams and Petruzzi continue on spiritedly, but certain tendentious moments waste the liveliness of their performances. A particularly silly physical altercation, for example, strikes of a playwright losing his control over events.

What Gardiner does achieve, however, is a play which gets you thinking, and this is more than can be said for many contemporary works. Thoreau once wrote that ‘there is no remedy for love but to love more.’ That is, until you can’t love anymore. Until your love decomposes you, and you cease to truly exist. Prayer Machine might not fully come together, but at least it asks pertinent questions about the extent to which we should remain faithful to wistful ideals, to lost dreams, to dissolving memories. It’s not uncommon that the unresolvable chaos of our present leads onto a longing for the shimmering, beguiling order of history. But Gardiner sees through this shimmer, as do, eventually, Peterson and Cantona. After all, as Peterson at one point asks, ‘What’s paradise without a snake?’

Prayer Machine will be performed until 27 November 2021